Cyanobacteria (commonly known as 'blue-green algae') are oxygenic photoautotrophs which evolved in the Archaean (4 to ~2.5 billion years ago) [1, 2] and have since diversified into a wide range of habitats, including lakes, oceans, soil, rocks, geothermal springs and glaciers [3]. Brackish species have been found living in estuarine environments [4, 5], but few genomes of brackish species have been sequenced [6]. Some of these include Nodularia spumigena CCY9414 and Aphanizomenon flos-aquae from the Baltic Sea [7, 8] and four strains of Microcystis aeruginosa from Japan and the Netherlands [9-11].

Phylogenetic and trait evolution studies suggest there have been several transitions between saltwater and freshwater environments during the evolution of cyanobacteria [12]. Intermediate stages of such transitions could have lived in brackish environments before acquiring the genetic mechanisms (e.g. synthesis of compatible solutes [13]) necessary to tolerate higher salinity of the ocean or lower salinity of freshwater lakes and rivers inland. To understand these stages in more detail, we sequenced draft genomes of three new brackish and filamentous strains isolated from sediments on the island of Schiermonnikoog in The Netherlands: Spirulina sp. CCY15215, Halomicronema sp. CCY15110 and Leptolyngbya sp. CCY15150.

Three strains of cyanobacteria were isolated from a microbial mat on the island of Schiermonnikoog in The Netherlands [14]. Mono-phototrophic cultures were isolated by plating and grown in BA+ medium (https://www.ccy.nioz.nl/cyanobacteria_media) at 20°C under a 16 h: 8 h light:dark cycle with 10-20 μmol m-2 s-1 of white light.

Genomic DNA was extracted from 1.8 ml of each microbial culture using DNeasy ultraclean microbial kits (Qiagen, Germany) according to the manufacturer's instructions. Purified genomic DNA was stored in 10 mM Tris buffer at pH 8 and -80°C until further use.

The evolutionary relationships of our brackish strains with other cyanobacteria were estimated by performing maximum likelihood phylogenetic analysis of 139 orthologous proteins, SSU rRNA and LSU rRNA from 168 strains representing the entire diversity of the Phylum, Cyanobacteria. Similar methods have been implemented previously (see these studies for a more detailed description [6, 12, 21]). Briefly, genomes were obtained from the NCBI RefSeq database (https://www.ncbi.nlm.nih.gov/refseq/). Protein and rRNA sequences were identified using the basic local alignment search tool (BLAST) for proteins or nucleotides respectively with an e value cut off <1×10-25 to remove anomalous hits. Each protein and rRNA were aligned using MAFFT v7.427 [22] and gaps removed if present in 85% or more sequences. The phylogeny itself was constructed in IQ-TREE v1.6.7 [23] using partitioned analyses which account for heterotachy and allow each protein and rRNA to evolve under a substitution model appropriate to that unique protein or RNA. Each of the substitution models were selected using Bayesian Information Criterion scores predicted by ModelFinder [24]. Support for branching relationships were measured by calculating ultrafast bootstrap approximations with 1000 replicates [25]. The resulting phylogeny was rooted with four representative strains of Vampirovibrionia, the sister phylum of Cyanobacteria [26].

Each draft genome is composed from between 304 and 621 contigs with genome sizes ranging from 5.5 to 6.1 Mbps. Overall genome completeness is estimated at between 97.1 to 98.0% with N50 values in the range of 31,079 to 116,290 and GC content from 42.6 to 54.6% (Table 1). To find out how these strains are related to other cyanobacteria, phylogenomic analyses were conducted using 139 orthologous cyanobacterial proteins as well as SSU and LSU rRNA. They reveal that 2 of the 3 filamentous brackish strains are nested within the LPP clade previously defined by Sánchez-Baracaldo [6] (Figure 1, Supplementary Information Figure S4). The other, named Spirulina sp. CCY15215 is in a distant phylogenetic position within the Macrocyanobacterial clade defined by Sánchez-Baracaldo [12] (Figure 1). Macrocyanobacteria are ecologically diverse, but generally have large cells, ranging from 3 to 50 μm in diameter. Members of the clade vary from Nostocales to Microcystis spp. and Oscillatoria spp.

To further investigate the mechanisms responsible for salt tolerance, protein BlastP searches were conducted for enzymes involved in the production of compatible solutes. Compatible solutes are molecules which aid osmoregulation in salty water [29]. Their production is catalysed by a series of genome-encoded enzymes, including phosphatases (eg. GpgP, GgpP, Spp), synthases (eg. GpgS, GgpS, TreY, Sps), hydrolases (eg. TreZ) and methyltransferases (eg. GSMT and DMT). In order to make any single compatible solute, multiple enzymes are required. For example, an appropriate synthase and phosphatase must be present to combine the glucose group of one molecule with the carbohydrate group of another and then remove a phosphate ion to synthesise sucrose, glucosylglycerol (GG) or glucosylglycerate (GGA). Whereas, to synthesise trehalose and glycine betaine (GB), either a synthase and hydrolase or two different methyltransferases must be encoded respectively in the genome [29]. To ensure we correctly identified the presence or absence of genes encoding these enzymes in each new genome, BlastP were conducted with query sequences from well-characterised cyanobacteria, including Synechocystis sp. PCC 6803, Nostoc sp. PCC 7120 and Synechococcus sp. PCC 7002 amongst others (Supplementary Information, Table S1).

Phylogenetic tree showing the relationships of Spirulina sp. CCY15215, Halomicronema sp. CCY15110 and Leptolyngbya sp. CCY15150 (red) within the Phylum, Cyanobacteria. The tree was constructed from alignments of 139 orthologous proteins, SSU rRNA and LSU rRNA using Maximum Likelihood methodology implemented in IQ-TREE v1.6.7 [23]. It was rooted using four strains of Vampirovibrionia as the outgroup. Node labels represent ultrafast bootstrap approximations with circles representing values of 100. The scale bar represents an average of 0.2 substitutions per site. For a complete tree detailing all taxa that were included, see Supplementary Information Figure S4. 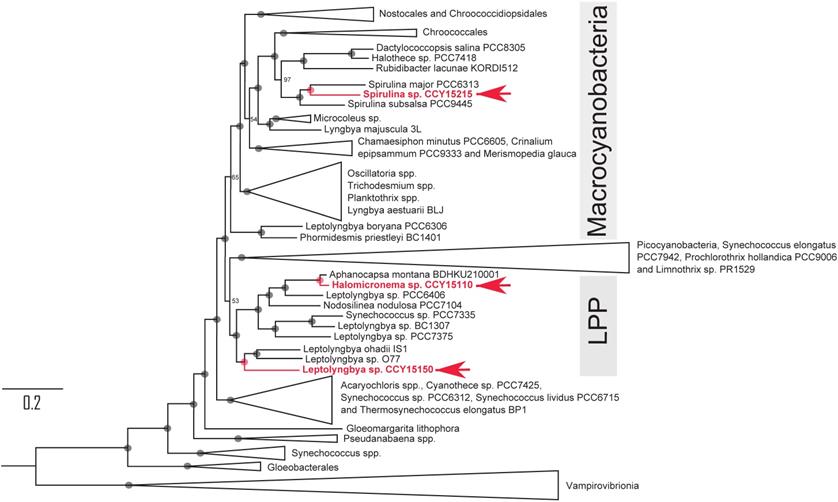 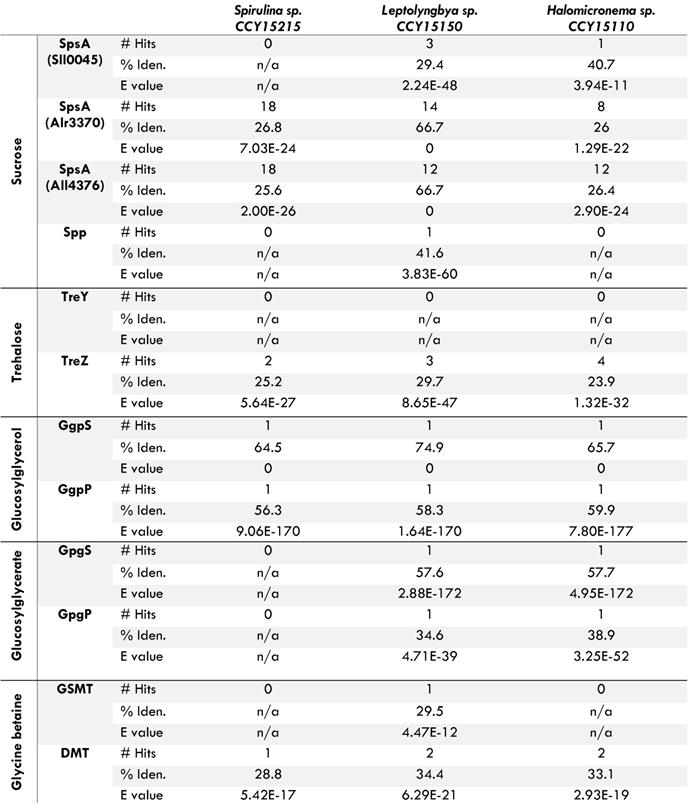 Homologs of genes required for the biosynthesis of sucrose (SpsA and Spp), trehalose (TreY and TreZ), glucosylglycerol (GgpS and GgpP), glucosylglycerate (GpgS and GpgP) and glycine betaine (GSMT and DMT) were found via BLASTP for genes identified by [29]. All results have e values lower than 1x10-10. If multiple hits were found, statistics are reported for the hit with the smallest e value. % Iden. refers to percent identity.

Our genome mining reveals that all three brackish strains are genetically capable of making GG (Table 2). It has previously been hypothesised that GG-production is a characteristic of moderately halotolerant marine cyanobacteria [29]. In addition to GG, Leptolyngbya sp. CCY15150 and Halomicronema sp. CCY15110 can make GGA (Table 2). Experimental studies measuring the accumulation of compatible solutes in cyanobacteria exposed to changing environmental conditions, suggest that GGA production increases in response to nitrogen limitation as well as increasing salinity [30], so its presence in Leptolyngbya sp. CCY15150 and Halomicronema sp. CCY15110 may help them to grow in lower nitrogen concentrations.

In addition to GG and GGA, Leptolyngbya sp. CCY15150 is genetically capable of making two further compatible solutes which may help it tolerate more saline conditions on the coastline. These are GB and sucrose (Table 2). Similarly large ranges of compatible solutes can be found in hypersaline strains [13], which is unusual given that Leptolyngbya sp. CCY15150 was isolated from a fresher, brackish environment [14]. One explanation may lie in the changeability of intertidal habitats. Coastal microbial mats are subjected to alternate ebbs and flows of the tide and changing weather patterns (e.g. precipitation, humidity and temperature) which have the effect of changing salinity. For example, on hot days, after the tide recedes, water evaporates from the microbial mat, leaving the surrounding environment to become more and more saline until the next rainfall or influx of the tide. Metagenomic analyses show that during Summer, the hottest season of the year in Schiermonnikoog, Leptolyngbya spp. in general are more abundant than Halomicronema spp. [14]. The presence of additional compatible solutes in Leptolyngbya sp. CCY15150 may go some way towards explaining this. Conversely, as draft genomes of Halomicronema sp. CCY15110 and Spirulina sp. CCY15215 both contain homologs of genes encoding one of two enzymes required for sucrose biosynthesis (SpsA but not Spp) and one of two enzymes required for GB biosynthesis (DMT but not GSMT, Table 2), there remains a small possibility that their complete genomes are sufficient to make additional compatible solutes.

Overall, draft genomes of three filamentous cyanobacteria expand the genomic representation of brackish strains in the tree of life and reveal that strains isolated from the same intertidal environment employ different strategies to acclimate to and tolerate variable salinities in a changing environment.

6. Blank CE, Sánchez-Baracaldo P. Timing of morphological and ecological innovations in the cyanobacteria - a key to understanding the rise in atmospheric oxygen. Geobiology. 2010;8:1-23

28. Cohen Z, Vonshak A. Fatty acid composition of Spirulina and Spirulina-like cyanobacteria in relation to their chemotaxonomy. Phytochemistry. 1991;30:205-6