Representative genomes from each cluster have been sequenced [12]. These Frankia genome databases has enabled the use of “omics” approaches [13-15] and allowed speciation of the genus [16].

Cluster 1 is further divided into subclades with subclade Ic containing strains limited to Casuarina and Allocasuarina and Myricaceae host plants. Actinorhizal plants belonging to Casuarinaceae family such as Casuarina glauca and C. equisetifolia will grow under saline environments [4, 5, 13]. These fast-growing trees originated from Australia and Pacific islands, and are widely used in agroforestry systems for several purposes [17]. Large-scale planting of casuarinas has proven to have a strong impact especially in China, Senegal, Egypt and Tunisia [18]. In arid and semi-arid areas, salinization of soils and groundwater is a serious problem causing a drastic reduction in agricultural production ([19, 20]; http://www.fao.org/nr/land/degradation/en/). Over 800 million hectares of land throughout the world are salt-affected [20]. An effective method for the reclamation of salt-affected soils involves initiating plant succession using fast growing, nitrogen fixing actinorhizal trees such as the Casuarina. The salt tolerance of Casuarina is enhanced by the nitrogen-fixing symbiosis that they form with Frankia.[7]. A broad spectrum “omics” approach on Frankia strains from Casuarina plants has allowed us to define several genes involved salt tolerance [21] including one gene that was cloned into a salt-sensitive strain [22]. The expression of the cloned genes provided increased tolerance to salt in the receipt strain. Here we have isolated three Frankia strains from Casuarina species that were found under salt stress conditions. These strains were sequenced to provide more information about salt tolerance genes and a greater understanding the metabolic potential of these actinobacteria.

Three different Casuarina plantation sites in Egypt were chosen for sampling and root nodules were collected and transferred to the laboratory in an icebox. From site one, the nodule sample was collected from a large Casuarina glauca. tree growing in sandy loamy soil around a Mango Garden, as “green-barrier fence, in Abuo-Shata, Ismailia, Egypt. For the second site, nodules were collected from Casuarina cunninghamiana tree growing inside a nearby Mango garden in Abuo-Shata, Ismailia, Egypt (Latitude and longitude coordinates: 30°35′47.37″N, 32°16′17.25″E). The third nodule sample was collected from C. glauca growing in sandy soil along Ismailia-Cairo highway (30.0444° N, 31.2357° E). After the nodules were cleaned with tap water and surface sterilized, Frankia strains were isolated as previously described [23]. Frankia isolates obtained from site 1, 2 and 3 were designated CgIM4, CcI156 and CgIS1, respectively, and propagated in B medium [23]. The Frankia isolates displayed the typical morphological traits of the genus Frankia (Fig. 1). These developmentally complex bacteria form three cell types: vegetative hyphae, spores located in sporangia and the unique lipid-enveloped cellular structures, termed vesicles [1, 3]. Vesicles act as specialized structures for the nitrogen fixation process [1, 3]. 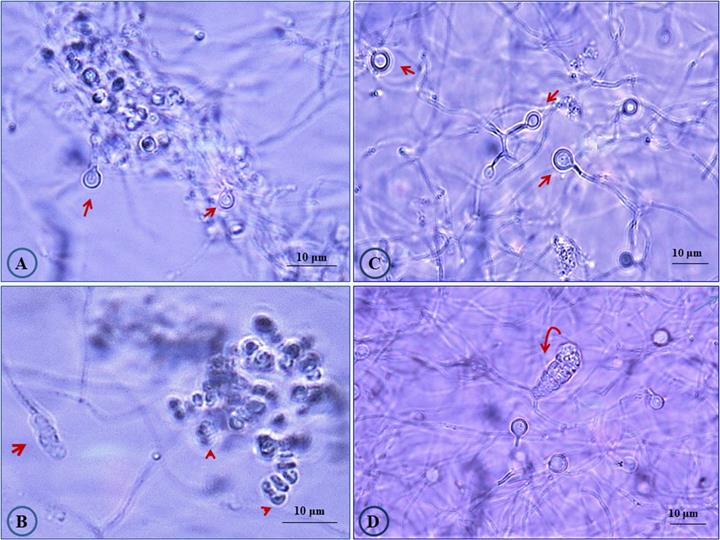 Effect of salt stress on the morphological characters of Frankia sp. strain CgIM4. Cultures were grown in B medium [23] under 300 mM NaCl stress for 45 days. (A) Vesicles showed slight deformation in which the elliptical shape with thinner wall was observed (arrow) compared to thick circular shape in normal condition; (a) magnified section of panel A showing deformed vesicles; (B) abundance of mature sporangia (arrows) were detected at a high frequency; (C) twisted mature sporangia (arrows) with constriction which showed mature spores filling the whole sporangium, note the absence of acropetal spore maturation as under non-stressed conditions (Fig. 1); (D) deformed vesicle. 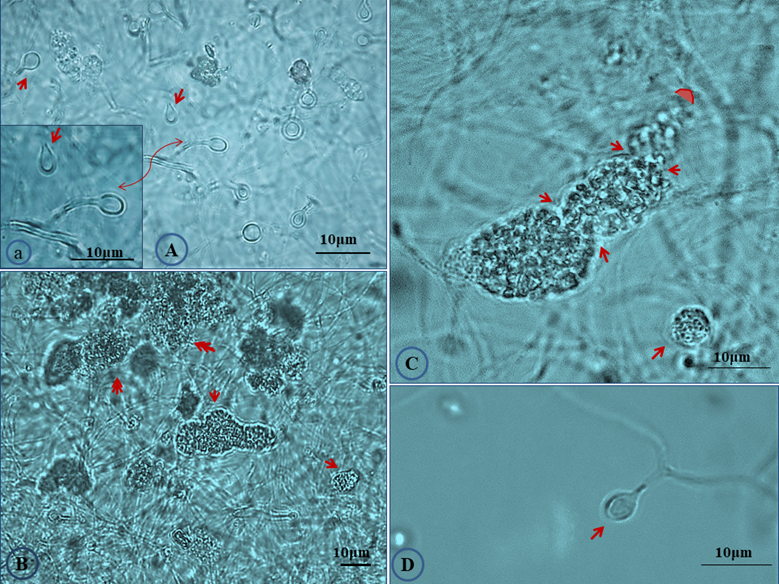 The assembled genomes were annotated via the NCBI Prokaryotic Genome Annotation Pipeline (PGAP) [27]. The annotation features are also given in Table 1. The genome features of three Frankia sp. strains are similar to other cluster 1c genomes (Table 1) including F. casuarinae strain CcI3T [28]. Analysis of the three genomes for the number of genes associated with the Clusters of Orthologous Groups (COG) functional categories showed that the pattern of distribution was similar to F. casuarinae strain CcI3T (Table S1). Phylogenetic analysis of the 16S rDNA shows that Frankia sp. strains CgS1, CcI156 and CgMI4 group with the cluster 1c strains (Figure S3) and further confirmed by dendrogram of the entire genomes (Figure S4). A whole genome-based taxonomic analysis via the Type (Strain) Genome Server (TYGS) platform [29] (https://tygs.dsmz.de) including digital DNA:DNA hybridization (dDDH) values [30] was performed to identify these strain compared to other Frankia genomes from Cluster 1c (Table S2). The type-based species clustering using a 70% dDDH radius around each of the type strains was used as previously [31], while subspecies clustering was done using a 79% dDDH threshold as previously introduced [32]. These data indicate that Frankia sp. strains CgS1, CcI156 and CgMI4 are members of Frankia casuarinae species. Average nucleotide identity (ANI) analysis of these genomes (Table S3) confirmed that idea with an ANI threshold range of 95% for species delineation [33].

Bioinformatic analysis of this genomes by the use of the AntiSMASH program [34] revealed the presence of high numbers of secondary metabolic biosynthetic gene clusters (Table 2), which is consistent with previous results with other Frankia lineage 3 genomes including cluster 3 [12, 35]. Many of these potential natural products should be involved in the plant-microbe interactions and aiding in their plant-growth-promoting activities. Analysis of the Frankia sp. strain CgS1, CcI156 and CgMI4 genomes revealed similar salt-tolerance genes as previously identified including several hypothetical proteins responsive to salt stress detected by genomic, transcriptomic, and proteomic approaches [21].

Biosynthettic gene clusters were identified by the use of the AntiSMASH software [34]. 1 NRPS: Nonribosomal peptide synthase. 2 PKS: polyketide synthase including Type I, II, III, Trans-AT and other types

Partial funding was provided by the New Hampshire Agricultural Experiment Station. This is Scientific Contribution Number 2863. This work was also supported by the USDA National Institute of Food and Agriculture Hatch 022821 (LST), the Plant Health and Production and Plant Products Program grant number 2015-67014-22849/project accession no. 1005242 from the USDA National Institute of Food and Agriculture (LST), the College of Life Science and Agriculture at the University of New Hampshire-Durham, and Technology Development Fund (STDF), grant No. 900, as International Cooperation Project (SM and LST). Sequencing was performed on an Illumina HiSeq2500 purchased with an NSF MRI Grant: DBI-1229361 to WK Thomas.

2. Benson DR, Dawson JO. Recent advances in the biogeography and genecology of symbiotic Frankia and its host plants. Physiol Plantarum. 2007;130:318-30

12. Tisa LS, Oshone R, Sarkar I, Ktari A, Sen A, Gtari M. Genomic approaches toward understanding the actinorhizal symbiosis: an update on the status of the Frankia genomes. Symbiosis. 2016;70:5-16