We report the first draft genome sequence of a Salmonella strain with plasmid-mediated resistance to colistin encoded by mcr-1 gene in Vietnam. Salmonella enterica subsp. enterica serovar Rissen was isolated from a Vietnamese pig slaughterhouse in 2013. We can confirm that mcr-1 gene is identical to the first reported mcr-1 gene of the Escherichia coli strain SHP45, isolated in 2015 from a Chinese pig. The plasmid containing this gene in the strain 19CS0416 was highly related (96.86% identity) to the plasmid (pHNSHP45) contained in this Chinese strain. Moreover, this plasmid was determined to be 100% identical to a plasmid (p13P477T-7) belonging to an Escherichia coli (13P477T) found in Hong Kong during the same year in pigs. Our results will aid in understanding the dissemination of mcr-1 gene in East Asia, dating back to as early as 2013.

Salmonellosis, a foodborne disease caused by Salmonella spp., is of global concern due to the high number of infections and increasing resistance of the bacteria to antibiotics. This zoonotic pathogen occurs in many food-producing animals and can be transmitted by raw meat, eggs, and dairy products [1]. Non-typhoidal Salmonella are a major cause of food-borne gastroenteritis worldwide [2]. These strains can be host-restricted or host generalists, infecting a broad range of vertebrates [3]. Salmonella enterica subsp. enterica serovar Rissen strain is ubiquitous and the most common serovar in pig and human patients with diarrhea in Vietnam [4]. We analyzed a Salmonella enterica subsp. enterica serovar Rissen that was isolated from a pig carcass in 2013 in a Vietnamese slaughterhouse. We determined the antibiotic susceptibility of isolate 19CS0416 and used next-generation sequencing data to analyze genes conferring antibiotic resistance, virulence genes, and to analize the plasmids.

For whole-genome sequencing, the strain was grown overnight at 37°C in 3 ml of Luria-Bertani broth (Mast Diagnostica GmbH, Reinfeld, Germany). DNA sequencing libraries were constructed using the Nextera XT Preparation Kit (Illumina Inc., San Diego, CA, USA) in accordance with the manufacturer´s instructions. Paired-end sequencing was performed on the Illumina MiSeq platform (Illumina Inc., San Diego, CA, USA) using a 300-cycle MiSeq reagent kit. In total, 2,351,952 reads were generated. A quality check was performed with FastQC v0.11.5 (available at http://www.bioinformatics.babraham.ac.uk/projects/fastqc/). Reads were de novo assembled using SPAdes v3.12.0 in Bayes Hammer mode (--careful) [8] and evaluated with QUAST v4.3 [9] in standard settings. The filtering of the sample was performed by removing contigs with coverage less than 5× and size below 500 bases. The filtered genome assembly was represented by 65 contigs with an N50 contig length of 554,575 bp in which the largest contig had 810,994 bp. The average coverage was 116-fold. The combined length of the contigs was 5,083,583 bp with a GC content of 51.92 %. Annotation was performed with RAST Server (v2.0) [10]. Annotation features include 5.203 coding sequences (CDS), 10 rRNAs, 79 tRNAs, and 1 transfer-messenger RNA (tmRNA).

Data were submitted and analyzed using an in-house Linux-based bioinformatics pipeline WGSBAC (available at https://gitlab.com/FLI_Bioinfo/WGSBAC). Genes coding for resistance were detected using abricate v08.13 (available at https://github.com/tseemann/abricate). Genotyping was performed with MLST (v2.16.1) showing a sequence type 469 (aroC (92), dnaN (107), hemD (79), hisD (156), purE (64), sucA (151) and thrA (87)) and the in silico serotyping detection was performed with SISTR (v1. 0.2) [11] confirming the serovar Rissen with antigenic formula 6,7,14:f,g:-. Data were analyzed against the databases ResFinder [12] and CARD [13]. The databases predicted antimicrobial resistance to penicillins and first-generation cephalosphorins, aminoglycosides, fluoroquinolones, colistin, and lincosamides (blaTEM-1b, aac(6′)-Iaa, aac(3)-IId, ant(3”)-Ia, mdf(A), floR, tet(A), tet(M), mcr-1, lnu(F)) (Table S1). Using abricate against the PlasmidFinder [14] database, genomic regions (replicons) of five independent plasmids could be identified (IncI2_1_Delta, IncFIC (FII)_1, ColRNAI_1, Col156_1, Col (BS512)) (Table S2). Plasmid preparation was performed with the QIAGEN® Plasmid Mini Kit (QIAGEN GmbH, Hilden, Germany) according to the manufacturer's instructions. We could confirm the presence of three plasmids in agarose gel electrophoresis [15, 16]. One hundred and thirty-seven virulence genes (Table S3) were predicted using abricate and the Virulence Factors Database [17]. Salmonella pathogenicity islands (SPIs) are suspected to be acquired by horizontal gene transfer and to have an effect on the structure of the genome [18, 19]. SPIFinder [20] confirmed three Salmonella pathogenicity islands (SPI-2, SPI-8 and C63PI) (Table S4). This is below the average (1-14 SPIs) and may be associated with individual serovar Rissen isolates as described before [20]. Therefore, using the virulence genes output predicted by the Virulence Factors Database, we have looked for the virulence genes associated with another SPI [21]. Genes related with SPl-I, SPI-3 and SPI-5 were found (Table S4) but not SPI-4. To confirm the presence or absence of SPI-4 the specific pathogenicity island SPI-4 genomic sequence of S. Typhimurium with accession number KP234070 was downloaded and mapped against our sequence 19CS0416 using Geneious prime (version 11.1.5) (Biomatters, Ltd., Auckland, 1010, New Zealand). The six genes siiABCDEF [22] present in this region were found in two different contigs of the studied sequence (Table S4). We could confirm that 7 SPIs were present in this strain (SPI-1, SPI-2, SPI-3, SPI-4, SPI-5, SPI-8 and C63PI).

For the evaluation of the mcr-1 gene, the program Geneious was used to find this gene in the annotated contigs. It was found in contig number 18. The mcr-1 gene (annotated as Lipid A phosphoethanolamine transferase by RAST server) was extracted and aligned against the mcr-1 gene of the Escherichia (E.) coli strain SHP45 plasmid pHNSHP45 published by Liu et al. in 2016. The alignment showed 100% identity with published sequence [23]. In the same contig, a replication initiation protein and genes related to Inc1 plasmid were found (Table S5). The sequence has 96.82% identity with the E. coli strain SHP45 plasmid pHNSHP45 (accession number KP347127.1). Using BLASTn [24] (https://blast.ncbi.nlm.nih.gov/Blast.cgi) it has been found that our strain has a 100% identity with the E. coli strain 13P477T plasmid p13P477T-7 (accession number NZ_CP021103.1), which belongs to a strain published by Ho et al. in 2017 taken from pig feces in Hong Kong in 2013.

Recombination and rearrangement events are driving factors for evolution, and the varying content of plasmids, AMR genes, and SPIs describes the diversity within a species. In further studies, the mcr-1 gene-containing genomes will be studied for their genomic evolution in a cross-species approach to elucidate the recombination and rearrangement events on the aforementioned genomic features.

The emergence of plasmid-mediated colistin resistance gene mcr-1 was first reported in 2015 in an E. coli strain isolated in a pig in China [23]. Since then, the gene was found in more than 30 countries [25]. In retrospect, the mcr-1 gene was also reported in E. coli isolates from China in the 1980ies [26], as well as in Salmonella isolates collected in Germany in 2008 [27]. In Vietnam, the first detected mcr-1 gene reported in E. coli was detected by PCR in 2013 in poultry [28] and a year later in pigs [29] (Fig. 1). In Salmonella spp., the first phenotypically colistin-resistant isolate was found in 2012 in pigs [30], and the first mcr-1 gene detection in this genus was confirmed by PCR in an isolate from pork between 2016 and 2017 (Fig. 1). Here we report the first draft genome sequence of a Salmonella enterica subsp. enterica serovar Rissen strain with a plasmid-mediated resistance to colistin encoded by the mcr-1 gene from Vietnam, which is identical to the first reported colistin-mediated mcr-1 gene. The plasmid was closely related (96.86% identity) to the plasmid containing mcr-1 (pHNSHP45) in the Chinese strain and it showed 100% identity to plasmid p13P477T-7 belonging to an E. coli (13P477T) found in Hong Kong in the same year in pigs. Our results will aid in understanding the dissemination of this gene and plasmid in East Asia, dating back to as early as 2013 and in different species as compared to the first reported mcr-1 carrying strain. The results show the importance of the One Health Approach for the surveillance of resistance in bacteria in food-producing animals in the food chain, food products, humans and the environment. 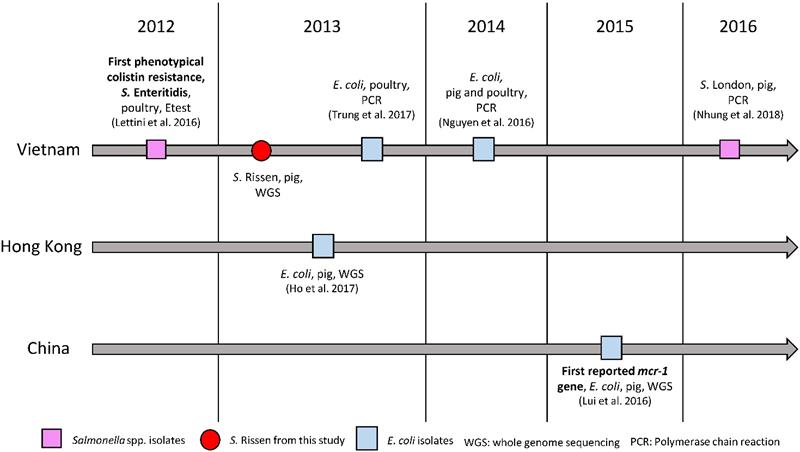 We thank Fiona Balzer and Herlinde Irsigler for skillful technical assistance. For this work, Belén González Santamarina, Silvia Garcia Soto, and Mostafa Y. Abdel-Glil were supported by in-house projects of the Friedrich-Loeffler-Institut on “AMR-One Health”. Anne Busch was supported by a grant of the German Federal Ministry of Education and Research within the framework of the project Ess-B.A.R. (FKZ 13N13983) and by the Deutsche Forschungsgemeinschaft (DFG, German Research Foundation) under Germany´s Excellence Strategy - EXC 2051 - Project-ID 390713860.