Strain KR-1 was isolated from pond water collected in Japan. Because this strain was capable of adsorbing palladium particles in sterilized water, strain KR-1 will be a useful biocatalyst for palladium-leaching from metal waste. Here we present a draft genome sequence of Deinococcus sp. KR-1, which consists of a total of 7 contigs containing 4,556,772 bp with a GC content of 70.0% and comprises 4,450 predicted coding sequences. Based on the 16S rRNA gene sequence analysis, strain KR-1 was identified as Deinococcus sp. KR-1.

Palladium is one of the platinum-group metals and is an important material used in several industries. For example, palladium is utilized in automobile catalytic converters, which are necessary to degrade harmful gases to harmless ones before their discharge into the atmosphere [1]. Palladium has a low melting point and is easily cast. For that reason, it is found on electronic circuit boards in many electronic devices, including televisions, computers and mobile phones [2]. Although the global demand of palladium is growing with the continuing development of technologies, the recovery rate of palladium from industrial products is low. However, in 2011, only 22% of the palladium was recovered from autocatalysts and jewelry scrap, and then its metal was reused [3]. Because electronic circuit boards include several types of rare metals, selective recovery of palladium entails multiple steps of pyro/hydrometallurgical processes, which increases the cost substantially [2]. Thus, establishment of a method for selective recovery of palladium would be highly desirable. Here we report the screening and isolation of a palladium-leaching bacterium, strain KR-1. For future in depth genomic studies and industrial applications of this strain, genome sequencing was carried out. 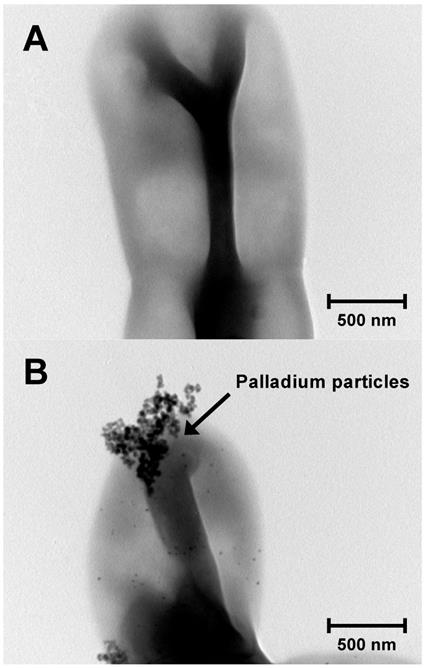 16S rRNA gene sequences of the related type strains were compared with reference sequences available in the GenBank/EMBL/DDBJ databases using BLAST. Construction of a maximum-likelihood tree was performed using FastTree2 [7, 8].

Although various biosorption methods for palladium-leaching are established [9, 10], most of the biosorption methods have not been applied in the industry [2]. The reasons are that their culture conditions are intricate and their growth is relatively slow. To establish a practicable biosorption method for palladium-leaching, we propose to apply an oligotroph with a faster growth rate. Because oligotroph grows under conditions of low levels of nutrients, our method may reduce the running cost. To obtain oligotrophic microorganisms, a diluted solution was prepared from pond water and then plated onto R2A plate. After incubation for 1 day at 30°C, several colonies were obtained. Subsequently, we carried out the biosorption experiment of palladium with several isolates. As the result, a few isolates showed palladium biosorption and the highest levels of biosorption were confirmed in strain K-1 (Fig. 1).

When genomic features of Deinococcus sp. KR-1, D. actinosclerus BM2T, D. actinosclerus SJTR and D. soli ZLM-202T were compared, numbers of tRNA and rRNA as well as the GC content were almost the same (Table 1). On the other hand, the coding sequence number of strain KR-1 was about 1.5 times higher than those of D. actinosclerus BM2T and D. soli ZLM-202T. This result suggested that strain KR-1 may have a unique pathway to grow in oligotrophic media. Although Desulfovibrio genus bacteria such as D. desulfurican D. fructosivorans and D. vulgaris have also the ability to adsorb palladium, the molecular mechanism of palladium-leaching is unclear [10, 15]. In this study, we determined the draft genome sequence of Deinococcus sp. KR-1, which enables to create the deletion mutants of cell wall protein. To elucidate the molecular mechanism of Deinococcus sp. KR-1, we are planning to examine palladium biosorption with several kinds of deletion mutants. The results will be described elsewhere as the next stage of our study.

Comparison of general genome features of strain KR-1 with the related type strains.

Phylogenetic tree constructed from analysis of 16S rRNA gene sequences showing the relationships between strain KR-1 and its related type strains. The bar indicates a 0.05% nucleotide substitution rate. The tree was rooted using Thermus thermophilus HB8T as the outgroup.