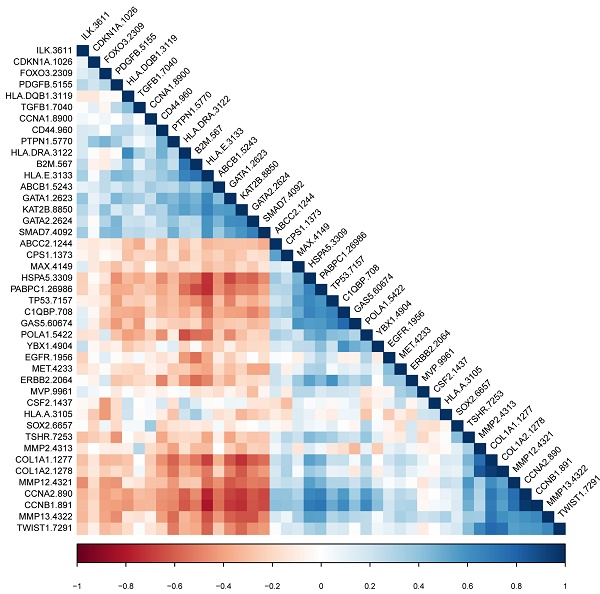 Y-Box Binding protein 1 (YBX-1) is known to be involved in various types of cancers. It's interactors also play major role in various cellular functions. Present work aimed to study the expression profile of the YBX-1 interactors during lung adenocarcinoma (LUAD). The differential expression analysis involved 57 genes from 95 lung adenocarcinoma samples, construction of gene network and topology analysis. A Total of 43 genes were found to be differentially expressed from which 17 genes were found to be down regulated and 26 genes were up-regulated. We observed that Polyadenylate-binding protein 1 (PABPC1), a protein involved in YBX1 translation, is highly correlated with YBX1. The interaction network analysis for a differentially expressed non-coding RNA Growth Arrest Specific 5 (GAS5) suggests that two proteins namely, Growth Arrest Specific 2 (GAS2) and Peripheral myelin protein 22 (PMP22) are potentially involved in LUAD progression. The network analysis and differential expression suggests that Collagen type 1 alpha 2 (COL1A2) can be potential biomarker and target for LUAD.

Lung Adenocarcinoma, a subtype of non-small cell lung cancer is the most pervasive among lung cancers leading to the death of millions of people each year [1, 2]. Though the recent therapy for the lung adenocarcinoma with mutated EGFR and rearranged ALK have been significant [3, 4], but the other driving force for the progress of lung adenocarcinoma have not been deciphered much. The type of interaction among the gene and its environment decides their role in disease progression [5, 6]. Understanding the gene interactions and its importance in the regulation mechanism is necessary to identify a potential target for therapeutic application.

In this study, we analyzed the expression of Y- box binding protein 1 (YBX1) and its interactors in lung adenocarcinoma (LUAD). YBX1 belongs to the Y-box binding protein family with a highly conserved cold shock domain and known to be involved in various eukaryotic cellular mechanisms [7-9]. YBX1 is usually involved in RNA splicing and translational mechanism in cytoplasm but, it translocates to nucleus and gets involved in transcriptional regulation during stress condition [10-13]. It is associated with drug resistance, cell proliferation and cell death [14]. The transcription factor of YBX1 binds to the E-box for regulating it [15].

YBX1 is over expressed in various cancers and it has been suggested as biomarker in prognosis of various cancer types [16, 17]. Multi drug resistance and metastasis are major reason for it's over expression [18, 19]. YBX1 interactors are known to be involved in various cellular mechanisms ranging from cell signaling, DNA and protein repair mechanism to transcriptional regulation [20-26]. Genes which are known to be involved in regulation of YBX1 as well as those regulated by YBX1 has been listed in (Table 1).

In this study we investigated the role of YBX1 and its interactors in Lung adenocarcinoma by looking at their expression profile and constructed gene regulatory network in order to decipher their importance in network formation by a system biological approach.

Genes regulates and regulated by YBX1

Principle Component Analysis (PCA) and hierarchical clustering with log transformed datasets of the samples were performed using R-Bioconductor [70,71] package DESeq2 [72] to estimate sample dispersion and to filter out the outlier.

Gene regulatory network was constructed for the 56 genes omitting GAS5 using the GeneMANIA [76] with maximum resultant gene and attributes to enrich were 30 and 215 respectively. And the constructed network was analyzed for its network topology by looking at its parameters like closeness centrality, betweenness centrality and degree with network analysis tool in Cytoscape 3.4 [77]. RAIN (RNA - protein Association and Interaction Network) [78] was used to identify interactors for the long non-coding RNA (lncRNA) GAS5. And Search Tool for Retrieval of Interacting Genes (STRING) database [79] was used to analyze the network and the interactions with confidence level of 0.7 were considered significant. Network with not more than 10 interactors for the GAS5 was constructed.

Functional enrichment for the genes common to both differentially expressed gene sets and hub genes from network was done by using Database for Annotation, Visualization and Integrated Discovery (DAVID) [80]. Gene Ontology (GO) database [81] provides the annotation for the gene set and Reactome pathway [82] illustrate the pathways in which the genes were involved. With DAVID tool we analyzed the gene set in both GO and Reactome pathway with p-value < 0.05 and gene-count > 3 as condition for enrichment analysis.

Assessment of Sample Quality and Filtering

In this study, we initially took 116 LUAD samples with TCGA level-3 data. With Principle Component Analysis (PCA) and hierarchical clustering removed samples whichever showed variation within its group (Figure S1). And we plotted again PCA and hierarchical clustering for the final 95 samples with 57 genes. After filtering, two methods now able to distinguish the samples based on their conditions- normal or tumor (Figure 1).

The 43 genes which have adjusted-p value less than 0.05 were selected as differentially expressed with GATA1 having a high negative fold change (-1.91476) and MMP13 having a high positive fold change (5.81790). And correlation matrix between the differentially expressed genes was constructed and the correlation coefficient with p-value less than 0.05 were considered significant (Figure 2). YBX1 showed a maximum positive correlation with C1QBP (0.592) and negative correlation with HLA-E (-0.281) (Table S1).

Gene network was constructed and analyzed (Figure 3), it has 86 nodes and 3611 interactions (Table 2). Top 10 genes involved in the network formation were selected based on the topology parameter-degree, betweenness centrality and closeness centrality (Table 3). The attributes from GeneMANIA showed cancer pathways hold 15.34% in network with involvement of 17 genes (Table 4).

As GeneMANIA construct network and interactions for the coding gene, it was not able to predict for GAS5. So RAIN database which identify the interactors for non-coding RNA was used to identify interactors of GAS5. Total 10 interactors were found and the network was constructed between the genes with confidence level of 0.7 using STRING database (Figure 4) 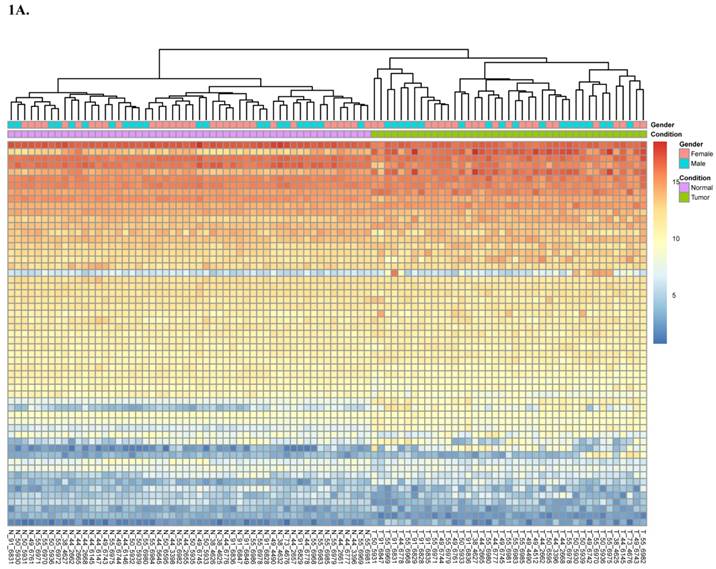 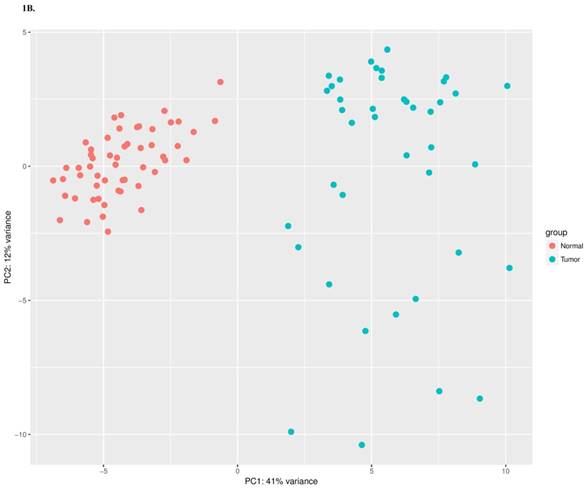 Correlation plot between the differentially expressed genes in LUAD. Correlation with the significance p- value (<0.05) are shown. Insignificant correlation are left blank without colors. 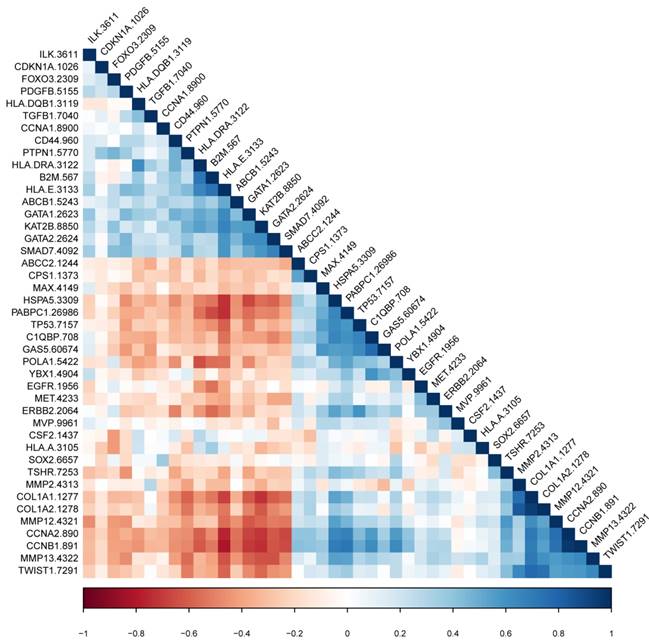 The annotation of the gene with GO and Reactome pathways using DAVID resulted in a single cluster with genes enriched in GO- cellular components of proteinaceous extracellular matrix and extracellular region. GO- Biological process contained the collagen catabolic process and Reactome pathways included Generic transcriptional regulation. Only 3 genes were involved in the enrichment when the condition for enrichment was made high, namely- COL1A2, MMP12, MMP13. The enriched terms are shown in Table 5. 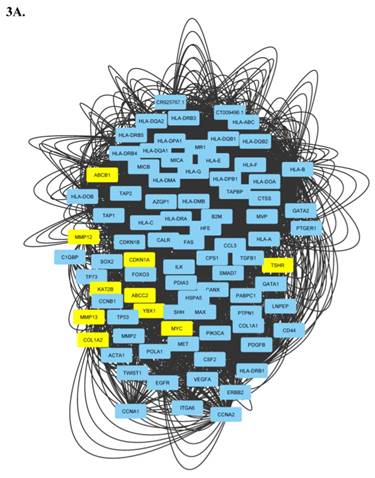 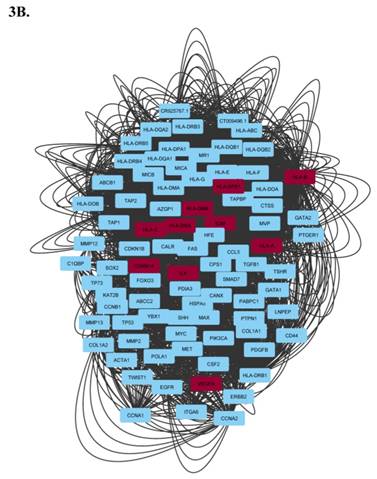 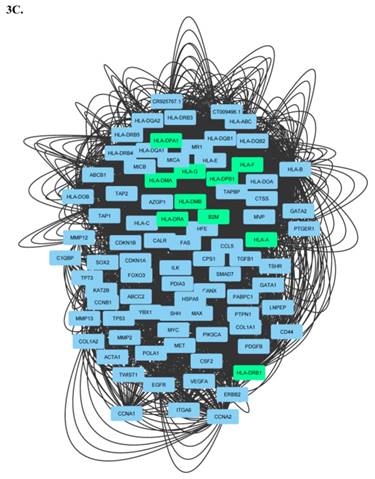 Interactors of GAS5 derived from RAIN database. Interaction with confidence level > 0.7 is considered as significant. Among the interactors GAS2 and PMP22 are the proteins involved in interaction with GAS5. 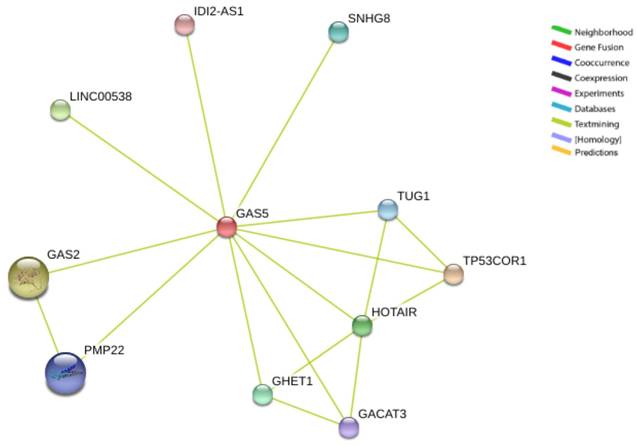 Despite of various studies carried out on YBX1, role of its interactors in lung adenocarcinoma have been less explored. YBX1 have been involved in the regulation of tumor progression in lung adenocarcinoma [83, 84], so understanding its interactions with other gene become a necessary to know their mechanism in disease progression and drug discovery. Our present study finds that YBX1 is up regulated with a low fold change (0.224). GATA 1 and GATA 2 which upregulate YBX1 level in erythroid cells [20] were found to be down regulated that indicates that they don't play major role in regulation of YBX1 in lung adenocarcinoma.

Among the genes which upregulate YBX1, PABPC1 which is involved in the translation of YBX1 mRNA [85] was found to be having high correlation (> 0.4) with YBX1 and it was significantly expressed with a fold change of 1.259. C1QBP which is known to be involved in prostate cancer progression [86] and a highly negative regulator of YBX1 in renal cell carcinoma [87] is highly correlated with YBX1 along with GAS5, a long non-coding RNA which involves in regulating cell death in prostate cancer [88]. Among the GAS5 interactors identified from RAIN database there are two proteins namely Growth Arrest Specific 2 (GAS2) and Peripheral myelin protein 22 (PMP22) which are known to be over expressed in colorectal cancer cell and breast cancer patients [89, 90] respectively. However the evidence regarding their role in LUAD disease progression needs to be explored for being a potential biomarker in LUAD identification and for therapeutic application.

Comparison of the differentially expressed genes and the hub genes in the network formation revealed that MMP13, ABCC2, MMP12, TSHR, COL1A2, PABPC1 and YBX1 are common among the both groups. Except for PABPC1, rest of the genes are usually repressed by YBX1, but in our study they are among the highly up regulated genes making a need for further study to understand their relationship between YBX1 in LUAD. Among the three genes involved in the enrichment, MMP12 and MMP13 are reported to be involved in the lung cancer in earlier studies [90- 94]. Significantly COL1A2 is involved in progress of gastric cancer [95] and in head and neck cancer [96]. It can serve as a potential biomarker in LUAD and its involvement in the disease progress need to be explored.

The study aimed to investigate the role of YBX1 and its interactors in lung adenocarcinoma by looking at their differential expression and network topology study. The study showed PABPC1 can be potential target in regulating YBX1. The lncRNA GAS5, whose role in the LUAD need to be explored and it can be a potential biomarker along with COL1A2.

43. Fukada T, Tonks NK. Identification of YB-1 as a regulator of PTP1B expression: implications for regulation of insulin and cytokine signaling. Embo J. 2003;22:479-493

69. Li B, Dewey CN. RSEM: accurate transcript quantification from RNA-Seq data with or without a reference genome. BMC Bioinformatics. 2011;12:323