The sex determination systems of fish are highly diverse, while sex is determined by the Sry gene on the Y chromosome in most mammals [1]. Although sex is determined genetically in many fish species, it is also affected by environmental factors (e.g., exogenous steroids and temperature) and some fish change sex at a certain growth stage. Various genes have been identified as master sex genes in fish, for example, Dmy of Japanese medaka (Oryzias latipes) [2], GsdfY of Oryzias luzonensis [3], Sox3 of Oryzias dancena [4], Amhy of Odontesthes hatcheri [5], Amhr2 of torafugu (Takifugu rubripes) [6], Dmrt1 of tongue sole (Cynoglossus semilaevis) [7], and SdY of rainbow trout (Oncorhynchus mykiss) [8]. Therefore, researching these systems of various fish species is valuable to boost our understanding of sex determination systems in general and their evolution in fish in particular.

These two Seriola species are taxonomically close and their genome and transcriptome sequences are available [11-13]. We focused on this issue and also examined specifically whether the same gene acts as an SD gene in the Seriola species.

Interspersed repeats and low-complexity DNA sequences of each genome assembly were masked using Tandem repeats finder [17] and Repeatmasker [18] with the following option: species “teleost fish.” Then, whole-genome alignments of each orthologous chromosome between greater amberjack (Sdu) and yellowtail (Squ) were performed using LASTZ [19] with the following options: no transition, step=20, and chain.

Whole-genome alignments of each orthologous chromosome between greater amberjack and Japanese medaka (Ola) were also performed using LASTZ [19] with the following options: transition, step=20, and chain.

Genomic sequence alignments between Sdu chromosome 12 and the scaffold sequence (PEQF01098998.1) that contains the Hsd17b1 gene of California yellowtail (Sdo) were performed using LASTZ with the following options: no transition, step=20, and chain.

After removing alignments that were shorter than the thresholds (Sdu vs. Squ and Sdu vs. Sdo: 400, Sdu vs. Ola: 150) from Rdotplot files generated from LASTZ, the alignment blocks were plotted by R [20].

Biallelic SNP information of 10 males and 10 females was extracted from the sequence variation data of greater amberjack. Those SNPs with a minor allele frequency of less than 0.2 or missing data for more than two individuals were filtered out. An association test was performed by GWASpoly [21] with the 1-dom model and false discovery rate level = 0.01. Haplotypes were estimated by PHASE v2.1.1 [22,23] from the genotype data included in the result of GWASPoly. To identify the proteins into which the transcripts in greater amberjack translate, a translated nucleotide-to-protein BLAST search (blastx) of the greater amberjack transcriptome sequences against protein sequences of RefSeq vertebrate other (release 69) [24] was performed with an e-value cut-off of 0.01. 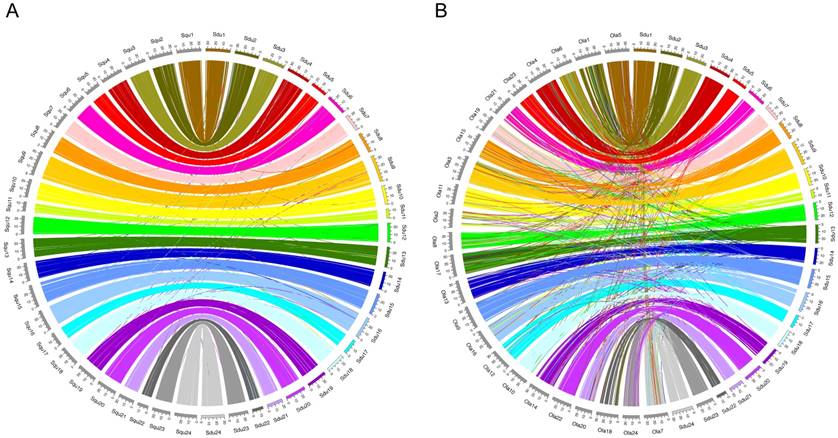 Pairwise whole-genome alignments of greater amberjack were performed against yellowtail and Japanese medaka with LASTZ [19]. The plots of alignments are shown in Figure 2 (greater amberjack vs. yellowtail) and Figure 3 (greater amberjack vs. Japanese medaka). The alignments between greater amberjack and yellowtail indicated that the chromosome structure was well conserved in these two species and homology of the genome sequences was retained in almost all regions of the genome (Figure 2, Figure S1). Hereafter, we assign the same number to the orthologous chromosomes of these two species using the numbers assigned according to linkage group numbers in a previous genetic map study [11]. In greater amberjack and Japanese medaka, the sequences could be aligned in a large range in some regions (e.g., Sdu2: 4.5-17.8 Mb vs. Ola1: 25.4-8.4 Mb, Sdu3: 7.0-16.7 Mb vs. Ola6: 5.6-16.3 Mb and Sdu4: 17.8-26.0 Mb vs. Ola4: 14.0-23.6 Mb), but chromosomal inversions and intra-chromosomal translocations were frequently observed (Figure 3, Figure S2). Genomic sequence alignments between Sdu12 and the scaffold sequence (PEQF01098998.1) of California yellowtail showed completely linear correspondence (Figure 4).

After SNP pruning, 1,797,184 SNPs were used for subsequent analysis. The 1-dom model in GWASpoly was considered to be an appropriate statistical model because minor alleles control sex in both XX/XY and ZW/ZZ sex determination systems. The loci significantly associated with sex in the 1-dom test by GWASpoly are shown in Table 1 and Manhattan plots of the 1-dom-alt and 1-dom-ref models are shown in Figure 5. In 1-dom-alt and 1-dom-ref, it is assumed that the alternative allele and reference allele are dominant, respectively. SNPs associated with sex were mainly covered with two scaffolds, contig43 and contig168, and we found one high-scoring locus, c168_4648290, associated with sex on contig168. The genotypes of sex-associated SNPs are shown in Table 2. Although eight loci (c16_12746979, c43_1018703, c43_1944077, c43_4403196, c168_3069620, c168_4823950, c168_5414906, and c387_222985) were heterozygous in the male and homozygous in the female, or XX/XY system, the other loci were heterozygous in the female and homozygous in the male, or ZZ/ZW system (Table 2), and localized on chromosome 12. We define the SD region as the region with significant SNPs on chromosome 12 in this paper. This region ranges from nucleotide positions 56,399 bp to 4,405,455 bp on contig43 and from 338,405 bp to 5,457,861 bp on contig168 (Table 1). In this SD region on chromosome 12, there are genes that encode proteins associated with sex hormones, such as G-protein-coupled estrogen receptor 1 (GPER), estradiol 17-beta-dehydrogenase 1, 17-beta-hydroxysteroid dehydrogenase 14, and transcription factors SOX8 and SOX9 (Table S1).

Output from GWASpoly. The softoware was run with 1-dom model and FDR level = 0.01

The reconstructed haplotypes estimated by PHASE from the genotype data are shown in Table 3. All females have haplotypes that are unique to females, while five male individuals (M5, M6 M7, M8, and M10 in Table 4) have two haplotypes that appear in both males and females.

By genome-wide sex association analysis, the sex-associated markers were detected on chromosomes (chr)12, 24, 1, 15, and 22 in decreasing order of the number of detected markers on each chromosome. A total of 31 of the 51 sex-associated SNPs are localized on chr12. Sex-associated linkage analysis of yellowtail showed that sex determinants are present on the tip of linkage group 12 [9]. Thus, part of chr12 acts as a sex chromosome in greater amberjack, as well as in yellowtail. Greater amberjack's SD loci were present at scaffolds 168 and 43. These sequences are located in the middle of chr12 and the range of the SD region is approximately 7.1 Mb, if ignoring the gaps between scaffolds.

The alignment of Sdu12 vs. the scaffold sequence (PEQF01098998.1) of California yellowtail also demonstrated well-conserved sequences. Hence, it is inferred that the three Seriola species share sex determination mechanisms because these Seriola species exhibit female heterogamety and have the same genes in orthologous genomic regions.

Medaka has the SD gene on chromosome 1 (Ola1). However, whole-genome alignment showed remarkable homology between Ola8 and Sdu12 (Figure 6). Medaka exhibits male heterogamety and its master SD gene is Dmy. Hence, the Seriola species and medaka clearly have different SD mechanisms and it is thought that SD systems rapidly evolved after the divergence of the common ancestor of those species.

Plots showing the alignment of each orthologous chromosome pair (1-4). The horizontal axis and the vertical axis indicate the positions (base pair) of greater amberjack (Sdu) and yellowtail (Squ), respectively. 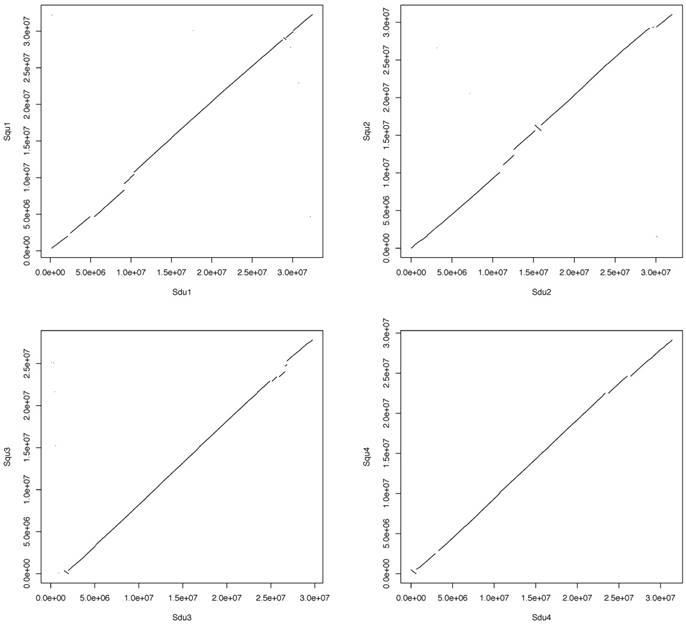 Plots showing the alignment of each orthologous chromosome pair. The horizontal axis and the vertical axis indicate the positions (base pair) of greater amberjack (Sdu) and medaka (Ola), respectively. 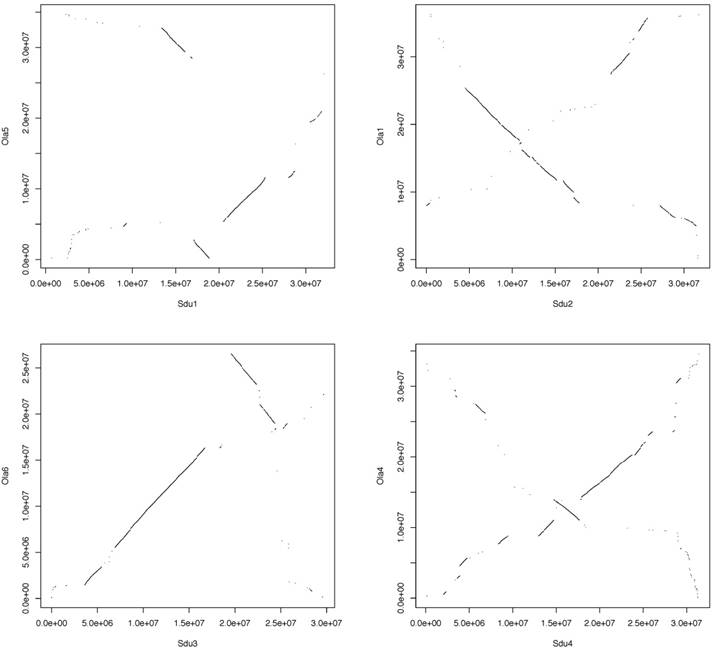 Plots showing the alignment of Sdu12 vs. the scaffold sequence (PEQF01098998.1) that contains the Hsd17b1 gene of California yellowtail. 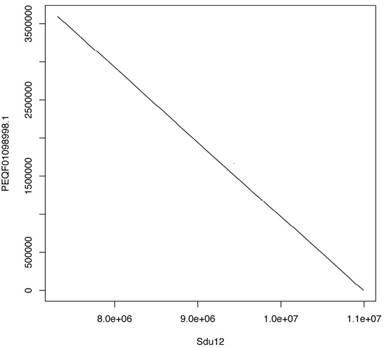 Amberjack has the ZW system

In this study, almost all sex-associated SNPs of greater amberjack demonstrated that females are heterozygous (Table 2) and all females have haplotypes that are unique to females (Table 3). Therefore, it is likely that greater amberjack females are the heterogametic sex (ZW/ZZ). SNPs between loci c43_4405455 and c43_1782220 were heterozygous in the male individual (M7 in Table 2) and homozygous in the female individual (F6 in Table 2), so the segment might have undergone recombination. Hence, this SD region may tolerate small-scale recombination and has not yet completely evolved into a sex chromosome.

Various sex determination mechanisms have been reported in fish species, and in most fish species, heteromorphic sex chromosomes have not been revealed [25]. In the SD region of greater amberjack, there are genes that encode proteins associated with sex hormones, such as G-protein-coupled estrogen receptor 1 (GPER), estradiol 17-beta-dehydrogenase 1, and 17-beta-hydroxysteroid dehydrogenase 14 (Table S1). Sox9 and Sox8 are present in the SD region, so they might be sex determinants. We also found several genes that are expected to be involved in sex differentiation in the SD region.

GPER is activated by estrogen, the main female sex hormone, and plays an important role in female development. In some teleosts, 17-beta estradiol plays a critical role in ovarian differentiation [26-29]. Hence, if the Gper gene or the estradiol 17-beta-dehydrogenase 1 gene in the SD region affects the female pathway and is involved with promoting sex differentiation in greater amberjack, the W chromosome is supposed to induce female differentiation. Recently, Purcell et al. identified the sex-determining region of California yellowtail using genome assembly and re-sequences and hypothesized that the estradiol 17-beta-dehydrogenase 1 gene was the putative sex-determining gene [10]. Thus, it is assumed that the three Seriola species may retain the same SD region that their common ancestor acquired, and that same gene might be involved in sex determination.

Haplotype combinations of each individual estimated by PHASE software. The number of haplotype corresponds to table 3.

GIPC (PDZ domain-containing protein, which interacts specifically with the C terminus of RGS-GAIP) was originally identified as a protein that binds to the C terminus of the RGS (G protein signaling regulator) protein GAIP (RGS19), a GTPase-activating protein (GAP) for Gαi subunits [30]. Endoglin, which is one of the PDZ ligands, interacts with GIPC and specifically enhances the TGF-β1-induced phosphorylation of Smad1/5/8 [31]. Testicular TGF-β1 modulates Leydig cell steroidogenesis, the organization of peritubular myoid cells, testis development, and spermatogenesis [32]. Therefore, although the role of endoglin in the reproductive system has not been shown, GPIC1 might play a role in sex determination in greater amberjack.

SOX9 and SOX8 are group E SOX proteins. These transcription factors contain, besides a DNA-binding HMG domain and a transactivation domain, a DNA-dependent dimerization domain, unique among SOX proteins. In mammals, Sox9 is activated by SRY in pre-Sertoli cells and induces Sertoli cell and testis cord differentiation [33]. SOX9 binds to a SOX binding site within the Amh promoter and interacts with SF1 to synergistically activate Amh expression [34]. SOX8 has the same mechanism of action as SOX9, but acts less efficiently [35]. In many teleosts such as medaka, zebrafish, three-spine stickleback, and rice field eel, Sox9a and/or Sox9b are expressed in gonad [36-41]. In greater amberjack, Sox9 and Sox8 are present in the SD region, so they might be sex determinants.

This study was funded by the seeds research of the National Research Institute of Aquaculture. We thank Edanz Group (www.edanzediting.com/ac) for editing a draft of this manuscript.

20. R_Core_Team. R: A language and environment for statistical computing. https://www.r-project.org/

38. Nakamoto M, Suzuki A, Matsuda M, Nagahama Y, Shibata N. Testicular type Sox9 is not involved in sex determination but might be in the development of testicular structures in the medaka, Oryzias latipes. Biochem Biophys Res Commun. 2005;333(3):729-736