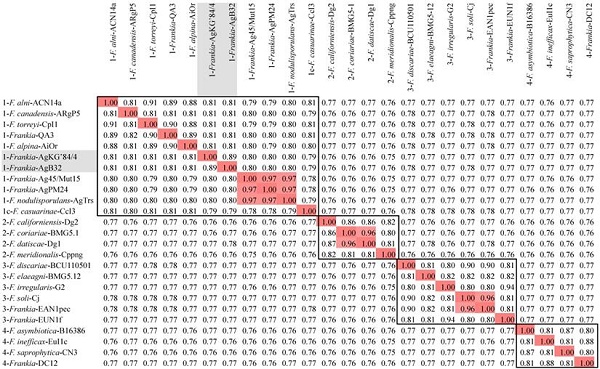 The genomes of two nitrogen-fixing Frankia strains, AgB32 and AgKG'84/4, were isolated from spore-containing (spore+) and spore-free (spore-) root nodules of Alnus glutinosa, but they did not sporulate upon reinfection. The two strains are described as representatives of two novel candidate species. Phylogenomic and ANI analyses indicate that each strain represents a novel species within cluster 1, with genome sizes of 6.3 and 6.7 Mb smaller than or similar to those of other cultivated Alnus-infective cluster 1 strains. Genes essential for nitrogen-fixation, clusters of orthologous genes, secondary metabolite clusters and transcriptional regulators analyzed by comparative genomic analyses were typical of those from Alnus-infective cluster 1 cultivated strains in both genomes. Compared to other cultivated Alnus-infective strains with large genomes, those of AgB32 and AgKG'84/4 had lost 380 or 409 genes, among which one hup cluster, one shc gene and the gvp cluster, which indicates genome erosion is taking place in these two strains.

Bacteria classified in the genus Frankia constitute a heterologous group of filamentous soil bacteria that can trigger the development of symbiotic root nodules on a range of host plants belonging to 25 genera of perennial, dicotyledonous, angiosperms [1-3]. Isolates have been classified into four distinct clusters, among which three comprise strains that fix atmospheric nitrogen (N2), either in pure culture or in nodules, while cluster 4 frankiae for the most part do not fix N2, except for one strain, and are often unable to fulfil Koch's postulates [4, 5]. Cluster 1 comprises strains infective on Alnus and Casuarina, with currently four described species and two candidate species [6]. The species have type strains deposited in culture collections as Frankia alni ACN14aT [7], F. torreyi CpI1T [8], F. casuarinae CcI3T [7] and F. canadensis ARgP5T [9]. Candidate species represent uncultured Frankia populations in root nodules of host plants, i.e. Candidatus F. nodulisporulans AgTrS, AgUmASt1 and AgUmASH1 [10] and Candidatus F. alpina AiOr, and AvVan [10] that have resisted all attempts at culture.

Several published works on genus Frankia using sub-cluster, OTU, group and genomospecies assignments did provide grounds permitting to affirm that cluster 1 is probably much more diverse than the four species and two candidate species described so far [4, 11-14]. This statement is supported by recent genome analyses of strains Ag45/Mut14 and AgPM24 as representatives of a yet undescribed species [15], and by comparative sequence analyses of amplicons of an actinobacteria-specific insertion in the 23S rRNA genes of frankiae that identified several strains clustering together but that are distinct from type strains of cluster 1 [16]. Strains AgB32 and AgKG'84/4 are two such strains, isolated from root nodules of Alnus glutinosa growing under contrasted environmental conditions at two locations in Germany about 350 km apart. Strain AgB32 was isolated from spore[+] root nodules of Alnus glutinosa of a forest ecotype that was interspersed with oak (Quercus robur) in an established riverside forest on a wet, but well aerated sandy loam in Bad Bentheim, Germany (52.320319, 7.159997) [17]. Strain AgKG'84/4 was isolated from spore[-] root nodules of A. glutinosa of the pioneer ecotype growing in a pure stand at a lake shore marsh in water-logged soil rich in organic material in Krems II-Goels, Germany (53.989103, 10.360772) [17]. Both strains had previously been identified as members of cluster 1, representing a subcluster designated as subgroup I [18] or cluster 1d [16]. In order to assess the viability of the previous amplicon-based analysis and to potentially amend and refine the species diversity of cluster 1 frankiae, we used whole genome sequence analyses trying to affirm the potential of strains AgB32 and AgKG'84/4 for the description of new species.

Assembled genomes of strains AgB32 and AgKG'84/4 as well as Frankia genomes of type strains of all described species and other selected genomes were selected for Average Nucleotide Identity (ANI) comparisons [26] using the pyani platform with the b (Blast) setting ([27]; https://pyani.readthedocs.io). Genomes were further analyzed on the Mage platform [28] to compute clusters of orthologous genes (COGs) [29], to identify secondary metabolite clusters through antiSMASH [30] and to identify genes specific to or lost in the new genomes. A MASH distance matrix [31] was used to construct a phylogenetic tree using a rapid neighbour joining algorithm [32] on the Mage platform.

Characteristics of the two Frankia genomes

A phylogenetic tree generated from the MASH matrix with Frankia genomes of type strains revealed that the closest strains to AgB32 and AgKG'84/4 were members of cluster 1 (Figure 1). Average nucleotide identity (ANI) between strains AgB32 and AgKG'84/4 was 89%, indicating that they belong to two separate genospecies (Figure 2). ANI values at or below 80% were obtained for both strains in comparison with Frankia genomes of type strains of all described species (Figure 2). The ANI values with other cluster 1 genomes ranged from 79% (CcI3) to 81% (ACN14a), while 76-77% values were obtained with cluster 2 genomes, and 77-78% with cluster 3 and 4 genomes (Figure 2).

All genes identified as playing a role in the symbiosis were found to be present in the genomes of AgB32 and AgKG'84/4, i.e. nif, hup, suf, shc, cel, glx, bcsA (Table 1). Furthermore, all genes that are more abundant in symbiotic lineages (clusters 1, 2 and 3) than in non-symbiotic lineages (cluster 4) (sodF, geoA, argF, accA, rhbE, dctA, phdA, tgsA, ddnB) were also recovered in AgB32 and AgKG'84/4 (Table 1). Conversely, gvp that codes for gas vesicle proteins, one of the two shc genes and one of the two hup clusters that are found in cluster 1 strains were not found in the two genomes while the symbiotic cluster was maintained [33].

Phylogenetic tree based on comparative sequence analyses of complete genomes of Frankia species and candidate species, using Streptomyces coelicolor (AL645882) as outgroup. Frankia clusters 1 to 4 are indicated on the right. Scale units are substitutions per site. The two genomes described in the present study have red arrows. 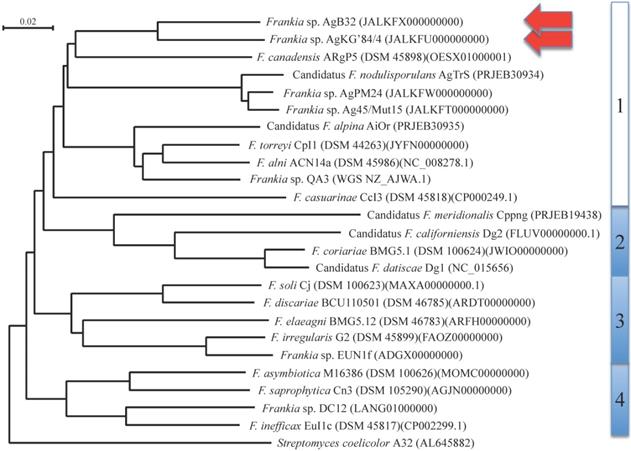 Heatmap matrix of Average Nucleotide Identity (ANI) comparisons (in percent) for the Frankia genomes of type strains of described species using the pyani platform with the b (Blast) setting [27]; https://pyani.readthedocs.io). The two genomes described in the present study are highlighted in grey. Those ANI values above the 95% threshold are highlighted in red. ANI values of clusters are boxed. 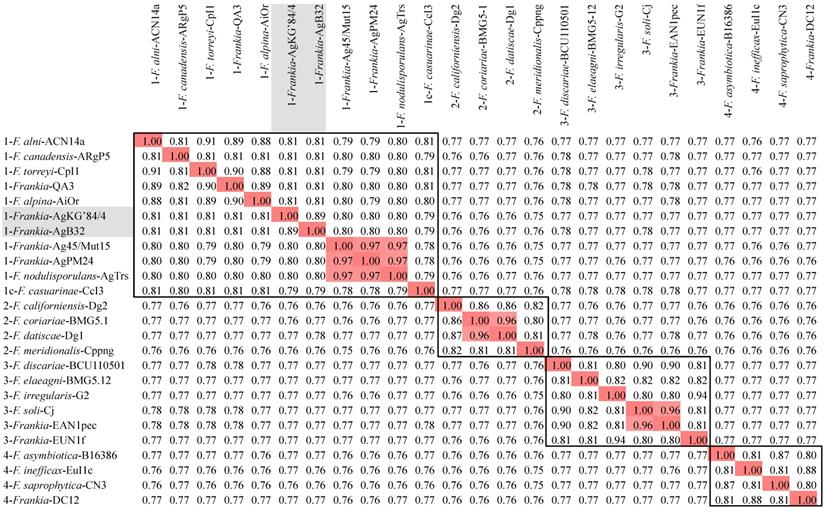 Basic genome characteristics (G+C%, genome length, number of CDS, number of secondary metabolite clusters, presence of selected genes, # of contigs and references) of Frankia strains AgB32 and AgKG'84/4 compared to those of type strains of Frankia species in clusters 1 to 4 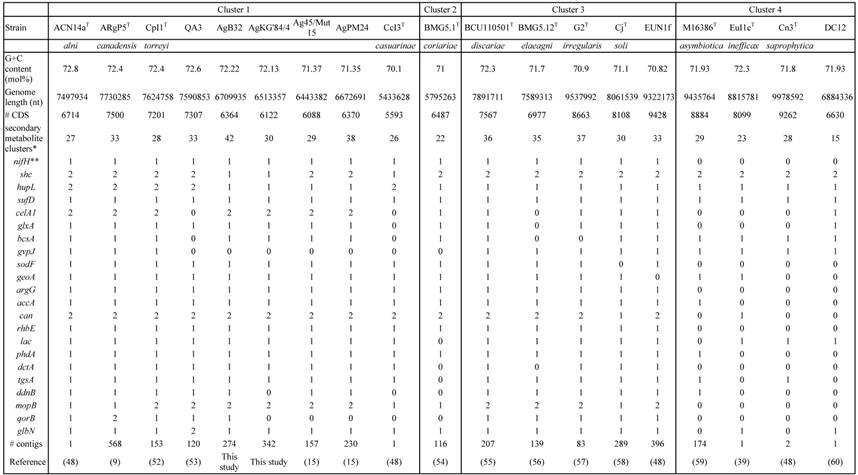 The genus Frankia has been scantily described for many years because of difficulties to isolate and grow frankiae in pure culture, a major prerequisite for the description of strains [34, 35]. Some populations to this day have even resisted isolation attempts so far [36]. Differentiation of isolates has also been hampered by the availability of few distinguishing features between populations [14]. Starting in 2007, new developments in whole genome sequencing techniques have overcome these difficulties and resulted in the determination of genome sequences of three Frankia isolates [37], and ultimately even of uncultured Frankia populations in root nodules [38]. Comparative analyses of whole genome sequences between Frankia populations have resulted in the description of twelve species and five candidate species for uncultured populations so far [6]. These numbers were based on the availability of 37 genomes [39], a number that is increasing regularly [15, 40]. Comparative sequences analyses of whole genomes and metrics such as ANI [26] or dDDH [41] are now used as foundation for the description of microbial genera, species and subspecies.

Members of the genus Frankia have been assigned into four clusters, numbered 1 to 4, within the genus [4]. These assignments have proven quite solid over the years, with cluster 1 in particular found to remain coherent with all Alnus-infective symbiotic strains. Cluster 1c with Casuarina-infective strains remains at the root of this cluster with several distinguishing features such as the lack of vesicles in nodules, a host-derived hemoglobin protection against oxygen and a distinct host range [6]. Alnus-infective symbiotic strains have been described initially on the basis of DNA/DNA homology as quite close to one another [14] but the full extent of diversity has slowly emerged with studies targeting new cultured strains and uncultured frankiae from specific environments [38, 42-47].

Genomes of Alnus-infective symbiotic strains have initially been found to be quite large at 7.5 Mb with several ancient duplicated genes such as the shc gene coding for the synthesis of hopanoid lipids [48], the hup genes coding for hydrogen uptake for the recycling of hydrogen derived from nitrogenase [33], the cel coding for cellulases [49], the can coding for the carbonic anhydrase necessary for feeding short chain fatty acids (SCFA) into the tricarboxylic acid (TCA) cycle or the kor genes coding for 2-oxoglutarate ferredoxin oxidoreductase that connects the TCA cycle with nitrogenase (with the nitrogen-fixation process) [50, 51]. Some of these duplications have been found to be lost in lineages with smaller genome size as is the case for Ag45/Mut15 and AgPM24 [15]. It appears the genomes of strains AgB32 and AgKG'84/4 are also undergoing a parallel process of genome erosion. This process is similar with some of the genes lost in common such as hup but also other genes such as shc only lost in AgB32 and AgKG'84/4.

AgB32 and AgKG'84/4 are two distinct lineages with an ANI of 89%, well below the threshold of 95 set by Goris [26] to delineate species but markedly above the 80% average between other Alnus-infective cluster 1 species. This would indicate the two strains should constitute two distinct species yet sharing many features due to a recent common ancestry.

39. Tisa LS, Oshone R, Sarkar I, Ktari A, Sen A, Gtari M. Genomic approaches toward understanding the actinorhizal symbiosis: an update on the status of the Frankia genomes. Symbiosis. 2016;70:5-16