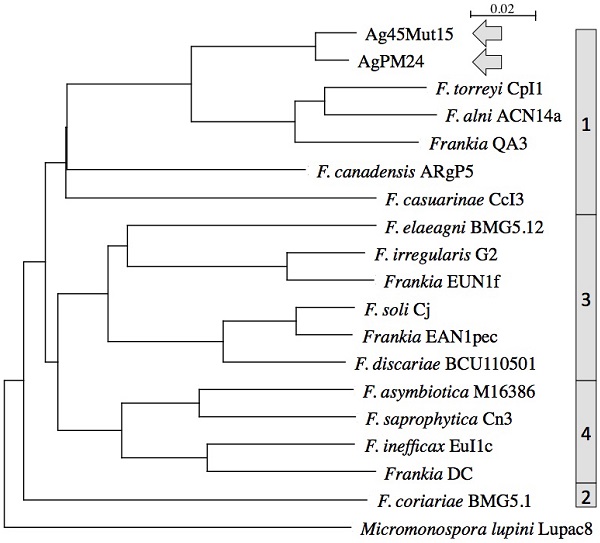 The genomes of two nitrogen-fixing Frankia strains, Ag45/Mut15 and AgPM24, isolated from root nodules of Alnus glutinosa are described as representatives of a novel candidate species. Phylogenomic and ANI analyses confirmed that both strains are related to cluster 1 frankiae, and that both strains belong to a novel species. At 6.4 - 6.7 Mb, their genomes were smaller than those of other cultivated Alnus-infective cluster 1 strains but larger than that of the non-cultivated Alnus-infective cluster 1 Sp+ strain AgTrS that was their closest neighbor as assessed by ANI. Comparative genomic analyses identified genes essential for nitrogen-fixation, gene composition as regards COGs, secondary metabolites clusters and transcriptional regulators typical of those from Alnus-infective cluster 1 cultivated strains in both genomes. There were 459 genes present in other cultivated Alnus-infective strains lost in the two genomes, spread over the whole of the genome, which indicates genome erosion is taking place in these two strains.

The genus Frankia consists of nitrogen- and non-nitrogen-fixing actinobacteria that can occur in root nodules in symbiosis with a variety of woody plants [1, 2], and in soil [3]. Root nodule formation is host plant-specific, with host infection groups, i.e. the Alnus and Casuarina host infection group, the Rosaceae/Coriariaceae/Datiscaceae host infection group and the Elaeagnaceae/Rhamnaceae host infection group, respectively, largely represented by Frankia clusters 1, 2 and 3. These clusters were established by comparative analyses of ribosomal RNA gene sequences [4] and represent nitrogen-fixing frankiae, while cluster 4 frankiae are typically unable to fix N2, with one exception, and are often not able to form root nodules [4, 5]. Within clusters, assignment of strains to sub-clusters, OTUs, groups and genomospecies have been used to further describe diversity within the genus [4, 6-9].

Whole genome sequence analyses resulted in the description of several species within the genus Frankia. These analyses include isolates deposited as type strains in culture collections, as well as uncultured Frankia populations in root nodules of specific host plants described as candidate species [10]. As summarized by Normand and Fernandez [10], cluster 1 is currently the most extensively described cluster with four species and two candidate species described, while one species and three candidate species are identified in cluster 2. Four species belong to cluster 3, and three species to cluster 4, with genomes of two additional potential species published recently [11]. For cluster 1, comparative sequence analyses of amplicons of an actinobacteria-specific insertion in the 23S rRNA genes of frankiae identified several strains clustering together but distinct from type strains of cluster 1 [12]. These strains included strains Ag45/Mut15 and AgPM24 isolated from root nodules of Alnus glutinosa from two lake shores, one in Germany and one in The Netherlands about 500 km apart, i.e. Grossensee (53.631031, 10.359319) [13], and Hoogmade (52.162016, 4.591356) [7], respectively. The goal of this study was to use whole genome sequence analyses to assess the viability of our previous amplicon-based analysis, and thus affirm the potential of these strains for the description of a new species.

Frankia strains Ag45/Mut15 and AgPM24 that were previously identified as members of cluster 1, representing a subcluster designated as subgroup II (14) or cluster 1b (12) were from a stock frozen at -20 °C in Defined Propionate Medium (DPM) containing propionate and NH4Cl as C and N source, respectively (15), at 30 °C for two weeks. Cells were harvested by centrifugation (15,000 × g, 5 min) and aggregates homogenized by brief sonication (10 s at 20% output in a S-450 sonifier, Branson Ultrasonics, Danbury, CT) (16). After an additional centrifugation, DNA was extracted from cell pellets using the SurePrepTM Soil DNA Isolation Kit (Fisher Scientific, Houston, TX) (17). DNA concentrations were measured with a Qubit® 2.0 Fluorometer (Life Technologies, Carlsbad, USA), and DNA sent to the Microbial Genomics Sequencing Center, Pittsburgh, PA, USA for library preparation and sequencing using the Illumina tagmentation protocol and the NextSeq Illumina platform (2 × 150 bp) using standard protocols.

Sequence reads were filtered and trimmed using the default settings of fastp (18), and reads with average %GC<54 were removed using bbduk (https://jgi.doe.gov/data-and-tools/bbtools/bb-tools-user-guide/). Genomes were assembled using SPAdes 3.13.0 [19] and QUAST to check the quality of the assembled genomes [20]. Their completeness was estimated using the lineage workflow (lineage_set) CheckM v1.0.18 [21] with default values.

Average Nucleotide Identity (ANI) comparisons (22) were performed for all Frankia genomes of type strains of described species and other selected genomes using the pyani platform with the b (Blast) setting ([23]; https://pyani.readthedocs.io). The genomes were compared to Frankia genomes of type strains of isolates on the Mage platform [24] to compute clusters of orthologous genes or COGs [25], to identify secondary metabolites clusters through antiSMASH [26], and identify genes specific to the new genomes or lost in the two genomes. A phylogenetic tree was reconstructed using a MASH distance matrix [27] and the tree computed dynamically directly in the Mage browser using a rapid neighbour joining algorithm [28].

The two genomes were similar in size with about 6.4 Mb and 6.7 Mb, respectively, which is about 1 Mb smaller than those of other Alnus-infective cluster 1 cultivated strains (Table 1). They were also similar in DNA G+C% content at 71.35-71.37, which is 1% lower than values for other Alnus-infective cluster 1 cultivated strains. A phylogenetic tree generated from the MASH matrix with Frankia genomes of type strains revealed that the closest strains to Ag45/Mut15 and AgPM24 were members of cluster 1 (Figure 1). Average nucleotide identity (ANI) between strains Ag45/Mut15 and AgPM24 was 97%, indicating that they belong to a single genospecies (Figure 2). An ANI of 97% was also obtained with strain AgTrS, an uncultured Frankia population in root nodules representing Candidatus Frankia nodulisporulans. Since this strain is an obligate symbiont with a very different physiology, it will not be considered further in the present study. ANI values at or below 80% were obtained for both strains in comparison with Frankia genomes of type strains of all described species (Figure 2). The ANI values with other cluster 1 genomes ranged from 78% (CcI3) to 80% (ACN14a), while 75-76% values were obtained with cluster 2 genomes, and 76-77% with cluster 3 and 4 genomes (Figure 2).

* indicates the number of clusters identified by AntiSMASH

gvp is gas vesicle cluster, sodF is superoxide dismutase iron, geoA is geosmine synthase, arG is arginine, acc is acetate carboxylase, can is carbonic anhydrase, rhb is rhizobactin, lac is laccase, phd is a phytoene desaturase,

Most genes associated with the Frankia-actinorhizal plant symbiosis were recovered in the two genomes, i.e. nif, hup, suf, shc, cel, glx, bcsA (Table 1). All genes that are more abundant in symbiotic lineages (clusters 1, 2 and 3) than in non-symbiotic lineages (cluster 4) (sodF, geoA, argF, accA, rhbE, dctA, phdA, tgsA, ddnB) were also recovered in Ag45/Mut15 and AgPM24 (Table 1). Conversely, gvp genes that code for gas vesicle proteins and one of the two hup clusters that are found in infective cluster 1 strains were not found in the two genomes.

The COG computation showed a set-up for Ag45/Mut15 and AgPM24 characteristic of other Alnus-infective cluster 1 strains with a low number of categories “N” (Cell motility) and “O” (Posttranslational modification, protein turnover, chaperones) (Table 2). These results are similar for the antiSMASH computation that showed Ag45/Mut15 and AgPM24 to have a set-up characteristic of other Alnus-infective cluster 1 strains with a high number of T1PKS and NRPS (Table 3) as were transcriptional regulators with a low number of GntR, IclR, LysR regulators (Table 4). A phyloprofile of genes present in Ag45/Mut15 and AgPM24 but without homologs at a threshold of 50% identity in AA and present in a synteny group in F. alni ACN14a, Frankia sp. QA3, F. torreyi CpI1 and F. canadensis ARgP5 yielded 1068 hits of which 621 were “proteins of unknown function”, 37 “HTH-transcriptional regulators”, 15 “acyl-CoA metabolism”, 5 “sigma factors”, 9 “amidohydrolase”, 14 “ABC transporter” and 7 “P450 cytochrome” (Table S1). Two were involved in the metabolism of xylose and xylulose. 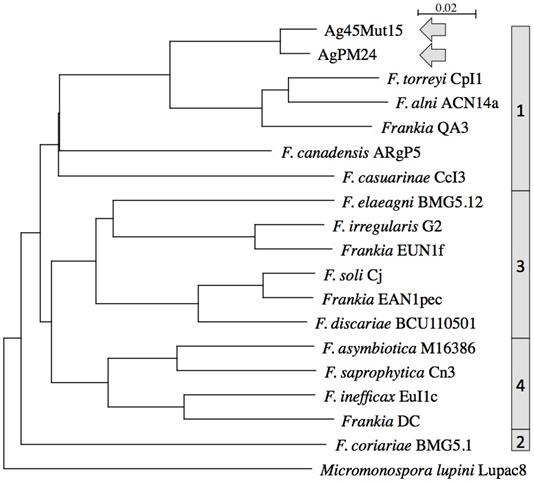 Heatmap matrix of Average Nucleotide Identity (ANI) comparisons (in percent) for the Frankia genomes of type strains of described species using the pyani platform with the b (Blast) setting (23); https://pyani.readthedocs.io). The two genomes described in the present study are highlighted in grey. 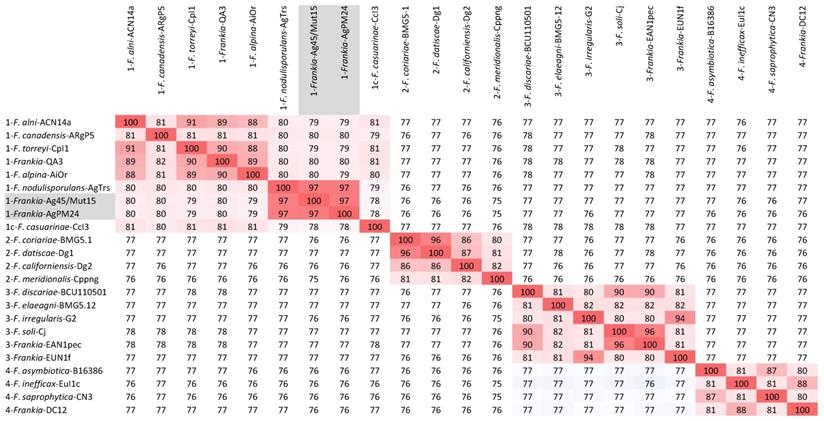 The genes lost in Ag45/Mut15 and AgPM24 have been mapped on the genome of ACN14a and found to be evenly spread over the whole genome (Supplementary Fig. 1).

Phylogenomic and ANI analyses confirmed that strains Ag45/Mut15 and AgPM24 are related to cluster 1 frankiae, and indicate that both strains isolated from Alnus glutinosa belong to a novel species. Genome sizes of both strains were about 6.4 Mb and 6.7 Mb, respectively, and thus smaller than genomes of most cluster 1 and some cluster 3 frankiae (7.5 Mb to 7.9 Mb), though genomes of Frankia casuarinae (4.9 to 5.6 Mb) and F. nodulisporulans (4.9 Mb), as well as F. coriariae as cluster 2 representative (5.8 Mb) were even smaller (see [5] for review). Some cluster 3 frankiae were much larger in size (9.0 to 10.4 Mb) [29-31], similar to many cluster 4 frankiae (8.8 to 10.7 Mb) [11]. Frankiae with larger genomes that often result from duplications of genes involved in substrate transfers into central metabolic pathways (e.g. cluster 1, 3 and 4 frankiae), might have an enhanced potential to exploit a large variety of environments [30, 32], compared to frankiae with smaller genomes due to genome reductions that are associated to reduced saprotrophic potential, while maintaining their symbiotic potential (e.g. F. casuarinae, F. nodulisporulans and F. coriariae).

Both Ag45/Mut15 and AgPM24 belong to a group of strains within cluster 1 that are able to use leaf litter compounds as carbon resource in addition to root exudates commonly used by other strains of clusters 1, 3 and 4 [16, 33]. Together with cluster 3 frankiae, members of this group have been identified as major populations in soils, with absolute numbers depending on the sampling depth, physicochemical conditions and the vegetation [12, 14, 34, 35]. Young stands of both host trees (e.g. natural stands of A. glutinosa) [35], and non-host trees (e.g. young plantations of Betula nigra) [14] seem to promote members of this group, as do leaf litter amendments to soils, both for introduced and indigenous populations [36]. Thus, this group with strains Ag45/Mut15 and AgPM24 as representatives could be adapted to carbon resources provided by the decomposition of plant material and represent a group of frankiae characteristic of soils in early stages of plant-mediated organic matter accumulation.

Functional genes typically found in nitrogen-fixing frankiae (i.e. clusters 1, 2 and 3) within the Frankia-actinorhizal plant symbiosis were recovered in the genomes of strains Ag45/Mut15 and AgPM24. These strains appear to have lost a large number of genes dispensable for saprotrophic life as is the case in Sp+ lineages [37] or in cl2 lineages [32] where one megabase or more relative to the closest neighbor has been lost. This process of gene erosion is slow with seemingly a conserved possibility of growth under physiologically demanding conditions [38]. The full extent of diversity with cluster 1 is slowly emerging with the description of genomes from new lineages such as the present one. It appears some lineages such as F. torreyi and even more so F. casuarinae have been isolated repeatedly while others such as QA3, F. canadensis and the two lineages Ag45/Mut15 and AgPM24 described in the present study have been more rarely isolated. Two related factors have probably caused this distortion, one is the evolutionary success over long eras resulting in a higher abundance in nature and the other is the physiological ability to grow relatively fast on a large range of substrates resulting in a higher isolation success rate. Their genome composition should now be analyzed in that light of adaptation to contrasted biotopes.

Genomes of the strains sequenced in this study from Dr. Dittmar Hahn culture collection and were deposited in the National Center for Biotechnology Information (NCBI), under BioProject Number PRJNA680372. Whole Genome Sequencing (WGS) accession numbers are JALKFT000000000 for strain Ag45/Mut15, and JALKFW000000000 for strain AgPM24.

A list of other Frankia genomes utilized in this study can be found in Table 1. All sequences were downloaded from the NCBI Assembly database.

1. Benson DR, Dawson JO. Recent advances in the biogeography and genecology of symbiotic Frankia and its host plants. Physiol Plant. 2007;130:318-330

46. Tisa LS, Oshone R, Sarkar I, Ktari A, Sen A. et al. Genomic approaches toward understanding the actinorhizal symbiosis: an update on the status of the Frankia genomes. Symbiosis. 2016;70:5-16