In this study, we describe the genomes of two novel candidate species of non-nitrogen fixing Frankia that were isolated from the root nodules of Coriaria nepalensis and Alnus glutinosa, genospecies CN and Ag, respectively. Comparative genomic analyses revealed that both genospecies lack genes essential for nitrogen-fixation and possess genes involved in the degradation of plant cell walls. Additionally, we found distinct biosynthetic gene clusters in each genospecies. The availability of these genomes will contribute to the study of the taxonomy and evolution of actinorhizal symbioses.

The actinobacterial genus Frankia consists of a diverse group of filamentous, gram-positive soil bacteria that are able to form root nodules with members of eight plant families representing about 25 genera of woody, dicotyledonous, perennial angiosperms [1-3]. Root nodule formation is host plant-specific, and largely correlates with assignments of strains to specific clusters derived from comparative sequence analyses of amplicons of genes such as 16S or 23S rRNA genes [4], nifH genes [5-7], gyrB or glnII [8] and concatenated sequences of some housekeeping genes (dnaA, ftsZ, and pgk) [9, 10]. Clusters 1, 2 and 3 represent Frankia strains that are capable of fixing atmospheric nitrogen (N2) in pure culture and in symbiosis, while members of cluster 4 are typically unable to fix N2, with one exception, and are often not able to form root nodules [4, 11].

Using comparative sequence analyses of amplicons of an actinobacteria-specific insertion in the 23S rRNA genes of additional cluster 4 frankiae, we identified several strains clustering together but distinct from type strains of cluster 4 [26]. These strains included CN4, CN6, CN7, and CNM7 isolated from Coriaria nepalensis [27], AgW1.1 and AgB1.9 isolated from Alnus glutinosa [28], and a yet undescribed strain AgB1.8 obtained from the same location as strain AgB1.9. The goal of this study was to use whole genome sequence analyses to assess the viability of our previous amplicon-based analysis, and thus affirm the potential of these strains for new species descriptions.

Sequence reads were filtered and trimmed using the default settings of fastp [32], and bbduk (https://jgi.doe.gov/data-and-tools/bbtools/bb-tools-user-guide/) was used to remove reads with average % GC < 54. Genomes were assembled using SPAdes 3.13.0 [33]. Quast was used to check the quality of the assembled genomes.

All “Frankia” genomes available in NCBI Genomes (https://www.ncbi.nlm.nih.gov/genome/) in November, 14, 2019 were downloaded for comparative genomic analyses. Anvi'o [34] was used to compare the shared COG functions among Frankia genomes and generate a core genome phylogenetic tree. The core genome phylogenetic tree was generated using anvi-gen-phylogenomic-tree with the concatenated alignment of 113 single-copy core genes (present in all genomes) that resulted in a total alignment length of 40,557 amino acids. Fragments of the 16S rRNA gene were recovered from the genomes using the HMM profile Ribosomal RNAs implemented in anvi'o. 16S rRNA gene sequences were aligned using SINA [35] and sequence identity was calculated with MEGAX 3 [36]. Pairwise Average Nucleotide Identity (ANI) was calculated with the fastANI software [37]. Identification of open reading frames (ORFs) was performed using Prokka using the default settings [38] and KEGG orthologous annotation was performed with kofamKOALA using the default settings [39]. We used antiSMASH 5.0 using the default settings [40] to investigate the presence of biosynthetic gene clusters (BGCs) categories across cluster 4 Frankia strains.

a Number of reads used in the genome assembling after quality control.

b N50 scaffold is the largest length L of which 50% of all nucleotides are in scaffolds of size at least L.

c Total number of G and C nucleotides in the genome, divided by the total length of the genome. 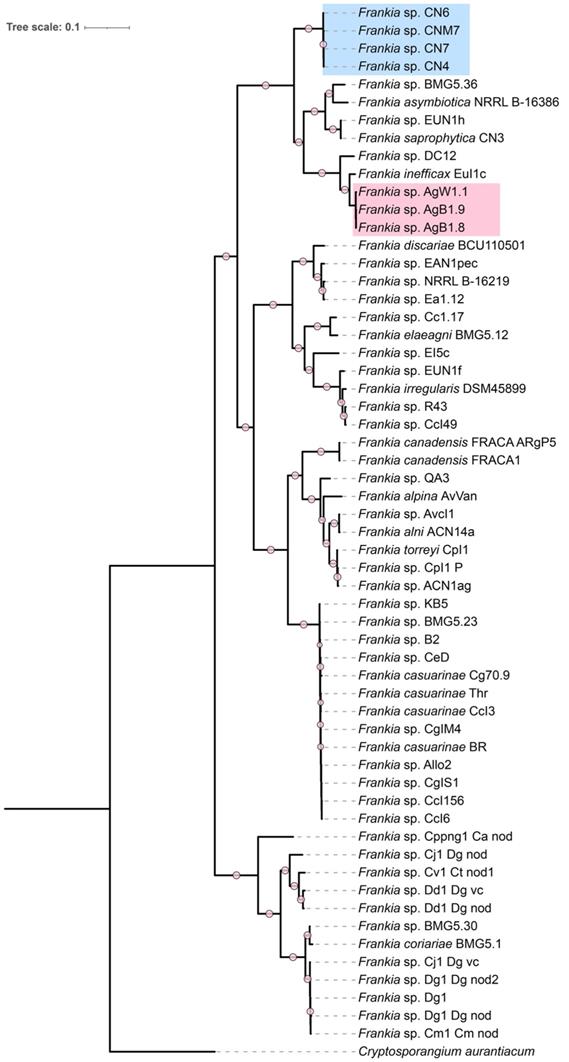 In order to determine if the strains described in this work were potential novel species the average nucleotide identity (ANI) was calculated among all the cluster 4 strains (Figure 2). AgB1.8, AgB1.9, AgW1.1, CNM7, CN4, CN6, CN7 did not show ANI ≥ 95% to any of the reference strains. Strains AgB1.8, AgB1.9, AgW1.1 showed ANI ≥ 99% to each other, which indicates they belong to the same genospecies (genospecies Ag). Strains CNM7, CN4, CN6, CN7 showed ANI ≥ 99% to each other, indicating that they belong to a single genospecies (genospecies CN). Analysis of nearly full length 16S rRNA gene fragment (alignment length 1,202) showed that the identity of cluster 4 frankiae ranged from 99.57% to 100% (Figure 2).

We compared the presence of KEGG orthologues (KO) of the two novel genospecies of Frankia Ag and CN with other Frankia strains (Table S2). As expected, nitrogenase complex genes (nif) were absent in all the seven strains sequenced in this study (Table S2). KEGG orthologues common to all cluster 4 genomes and absent in other frankiae included genes involved in the urea transporter system (K11959 to K11963), and the complete tryptophan metabolism pathway (KEGG module M00038). Additionally, KEGG orthologues involved in the biodegradation of xenobiotics were enriched in cluster 4 Frankia genomes when compared to other frankiae (Table S2). 415 KEGG orthologues were found in all 58 Frankia genomes analyzed in this study, including: alkaline phosphatases (K01113), which are involved in solubilization of soil phosphate (Nautiyal et al., 2000, Hahn et al., 2003); adherence proteins (K12510 and K12511), described to be involved in Actinobacillus actinomycetemcomitans host colonization (Kachalany et al. 2001) (Table S2).

In this study, we compared the genomes of three Frankia strains isolated from Alnus glutinosa and four strains isolated from Coriaria nepalensis with 51 publicly available genomes of Frankia. Phylogenomic and ANI analyses confirmed that these strains are related to cluster 4 frankiae, and indicate that the three strains isolated from Alnus glutinosa (AgB1.8, AgB1.9 and AgW1.1; Ag genospecies) belong to a novel species, as do the four strains from Coriaria nepalensis (CN4, CN6, CN7 and CNM7; CN genospecies). Genome sizes of all strains assembled as Ag and CN genospecies were about 9.8 Mb and 10.7 Mb, respectively. Sizes were comparable to those of other strains representing cluster 4 frankiae, i.e. F. inefficax and F. saprophytica with 8.8 Mb and 10 Mb, respectively, and much larger than genomes of most cluster 1 and 3 frankiae (7.5 Mb to 7.9 Mb), including F. casuarinae (4.9 to 5.6 Mb) and A. nodulisporulans (4.9 Mb), as well as F. coriariae as cluster 2 representative (5.8 Mb) (see [11] for review). An exception was the genome size of F. irregularis, a cluster 3 representative with a genome size similar to our cluster frankiae (9.5 Mb) [22], and of related cluster 3 strains R43 (10.44 Mb) [41] and EAN1pec (9.04 Mb) [42].

Heatmap matrix of similarity among genomes of cluster 4 frankiae. Top diagonal values correspond to the pairwise Average Nucleotide Identity (ANI) in percentage. Groups of genomes that fall into the estimated species boundary (ANI ≥ 95%) are delimited with black lines. Bottom diagonal values correspond to the pairwise identities of 16S rRNA genes (alignment length 1,202 bp) in percentage. No 16S rRNA sequence of Frankia sp. EUN1h was found in the genome using the anvi'o pipeline.

Abundance of biosynthetic gene cluster (BGCs) categories across selected genomes Frankia strains. The size of the circles represents the log of total number of clusters of each BGC category in each genome. T1PKS, Type-1 Polyketide synthase; NRPS, Non-ribosomal peptide synthetase. 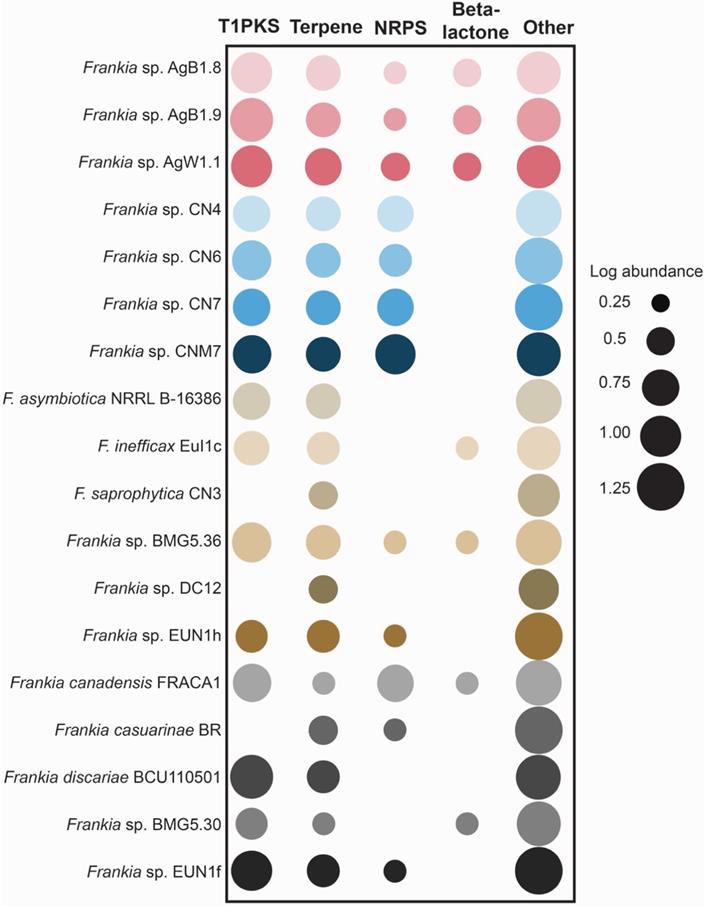 Smaller genome sizes in frankiae have been related to genome reductions are associated to reduced saprotrophic potential, but not symbiotic potential, while larger genomes created through genome expansions, often through duplication of genes involved in introducing substrates into central metabolic pathways, allowed frankiae to exploit a large variety of environments [17, 42]. The comparatively large genomes of cluster 3 and cluster 4 Frankia strains therefore suggest an increased saprotrophic potential compared to strains assigned to other clusters. In support of this hypothesis, indigenous cluster 3 frankiae as well as introduced strain EAN1pec have been shown to persist and grow under a broader range of environmental conditions (e.g. plant species, carbon resource or matric potential) than indigenous cluster 1a frankiae or introduced strains ArI3 (cluster 1a) and CcI3 (cluster 1c) [43, 44]. The results of these studies have been used to suggest that cluster 3 frankiae represent a group of generalists [44]. In addition, cluster 1a frankiae were characteristic populations of later stages in a succession of Frankia populations in soil associated with plant growth and succession. Frankiae of cluster 1b represented by Frankia strain Ag45/Mut15 were characteristic of soils in early stages of plant-mediated organic matter accumulation. Cluster 1c frankiae represented a group of highly-specialized frankiae that depended on the presence of their host plant to grow saprotrophically in soil [44].

Diversity of frankiae in soils vegetated with host plant species such as Alnus glutinosa or non-host plant species such as Betula nigra was found to be restricted to cluster 1 and 3 frankiae, and generally members of cluster 1b dominating [26]. Cluster 1b frankiae have been detected as major populations in several studies, with absolute numbers depending on the sampling depth, physicochemical conditions and the vegetation [43, 45, 46]. So far, cluster 4 frankiae have been detected as major Frankia population only in prairie soils where they represented about 50% of all frankiae, that included clusters 1b, 2 and 3, in native, restored and cultivated black prairie soil [26]. Native and restored prairie were dominated by Sorghastrum nutans (L.) (Indiangrass) and Andropogon gerardii Vitman (Big bluestem), while the cultivated prairie site was adjacent to the native prairie site, but cultivated continuously with corn. These results suggest that grasses are supporting a diverse community of frankiae in prairie soils, with significant positive effects on the abundance of cluster 4 frankiae. Although it has been shown that frankiae can grow in the rhizosphere of grasses [47], it is yet unclear for prairie environments whether these effects are related to rhizosphere effects of dense grass root environments or to organic matter accumulation in top soils.

Isolates representing cluster 4 frankiae have been obtained from a variety of different host plant species, i.e. Coriaria nepalensis, Alnus glutinosa, Elaeagnus umbellata, Datisca cannabina, and Ceanothus americanus (CN3, AgW1.1, EuI1c, DC12 and CaI1) [27, 28, 48-50]. Cluster 4 frankiae have also been detected in bioassays highlighting that they form an important fraction of all frankiae in wet soils under A. glutinosa [51, 52]. Some progenies of A. glutinosa, however, exhibited natural resistance to infection by these populations with no or only very small nodules formed [28, 53]. The failure to detect nodules has therefore resulted in the assumption that many cluster 4 frankiae are not only ineffective with respect to nitrogen-fixation, but also non-infective with respect to root nodule formation. Cluster 4 frankiae could therefore be characterized as largely or even entirely saprotrophic, with isolates obtained from root nodules as surfaces contaminants [54].

Both genospecies CN and Ag lack genes essential for nitrogen-fixation, as observed for cluster 4 species F. inefficax EUI1cT [23] and F. saprophytica CN3T [25], but not for F. asymbiotica M16386T [24]. While F. inefficax EUI1cT was observed to form ineffective nodules, none of the other species were able to form nodules on their original host plant. Members of genospecies Ag have been shown to induce small ineffective nodules on their respective host plant A. glutinosa [28] while members of genospecies CN failed to induce nodules on their host plant Coriaria nepalensis [27]. Genomes of genospecies Ag strains harbor genes encoding feruloyl esterases and beta-mannosidases that potentially participate in the degradation of plant cell walls as indicated for some plant fungal pathogens, and could therefore be involved in the plant infection process or in nutrient acquisition [55, 56]. Genes for both flavohemoglobin and nitrite/nitrate transport proteins are unique for genospecies CN strains potentially involved in the conversion of nitric oxide to nitrate [57]. Our analysis supports previous studies that found significant biosynthetic potential of Frankia spp. It has been hypothesized that specialized metabolites, such as the molecules produced by PKS and NRPS gene clusters, might participate in plant-microbial signaling and interactions [58]. While our genome studies confirm our previous expectations and affirm the potential of these strains for new species descriptions, the assessment of ecological differences between our genospecies CN and Ag, and described cluster 4 species requires additional experimental data.

1. Genomes of the strains sequenced in this study from Dr. Dittmar Hahn culture collection and were deposited in the National Center for Biotechnology Information (NCBI), under BioProject Number PRJNA680372. Individual RefSeq assembly accession numbers can be found in Table S1.

2. A list of other Frankia genomes utilized in this study can be found in Table S1. All sequences were downloaded from the NCBI Assembly database.

The authors acknowledge Quinlan J. Carlos-Shanley for writing a script to parse the genome annotation data.