Strain CCI9, which was isolated from leaf soil collected in Japan, was capable of growth on poor-nutrient medium, at temperatures of 10°C to 45°C, at pHs of 4.5 to 10, and in the presence of 7.0% NaCl. We determined a draft genome sequence of strain CCI9, which consists of a total of 28 contigs containing 4,644,734 bp with a GC content of 56.1%. This assembly yielded 4,154 predicted coding sequences. Multilocus sequence analysis (MLSA) based on atpD, gyrB, infB, and rpoB gene sequences were performed to further identify strain CCI9. The MLSA revealed that strain CCI9 clustered tightly with Enterobacter roggenkampii EN-117T. Moreover, the average nucleotide identity value (98.6%) between genome sequences of strain CCI9 and E. roggenkampii EN-117T exceeds the cutoff value for prokaryotic subspecies delineation. Therefore, strain CCI9 was identified as E. roggenkampii CCI9. To clarify differences between E. roggenkampii EN-117T and CCI9, the coding proteins were compared against the eggNOG database.

Microbial bioproduction enables continuous production of desired substances from nutrients including sugars, nitrogens and minerals. In the present day, therefore, a variety of microorganisms are used industrially for production of enzymes [1], medicines [2], and organic acids [3]. These microorganisms require high-nutrient media containing large amounts of sugar, nitrogen, phosphorus, mineral and other nutrients to optimize their productivities. On the other hand, the reduction of nutrient costs is important for achieving cost-effective production. Consequently, various attempts to reduce the production cost have been studied intensively in recent years. In general, the development of metabolically engineered strains with improved productivity of target substances is one of the most effective ways to reduce production costs [3]. For example, an engineered Mannheimia succiniciproducens strain is shown to increase the productivity of succinic acid and to decrease the by-product formation [4]. The utilization of agro-industrial wastes (such as sugarcane bagasse, potato peel waste and oil cake) as the nutrient sources also helps to reduce production costs [5].

Apart from those attempts, we expect that production costs could be reduced if an oligotrophic microorganism is used for industrial bioproduction, since oligotroph can grow under low-nutrient conditions. However, the doubling time of oligotroph is relatively long, and the growth of an obligate oligotroph is inhibited in the presence of high levels of nutrients [6]. These limitations make oligotroph difficult to use for the industrial bioproduction. Thus, new oligotrophic strain with fast growth rates is needed. Here, we report the isolation of an oligotroph, strain CCI9, with a fast growth rate. To facilitate future in-depth genomic studies and industrial applications of this strain, strain CCI9 was subjected to genome sequencing.

Soil samples were collected from Higashi-Hiroshima city in Hiroshima prefecture, Japan. A 1.5% agar plate (pH 7.2) without any additional carbon and nutrient sources was used for isolation of the objective oligotroph. Agar (Nacalai tesque, Kyoto, Japan) used in this study contains sulfate (<0.4%), calcium (<0.1%), iron, (<0.01%) and a few fatty acids and/or other minerals at concentrations less than 0.01%. The pH of agar plate was adjusted using NaOH. To isolate the oligotroph from the soil samples, soil samples were suspended at 10% (w/v) with sterilized water, and the suspension was then filtrated to remove the soil sample. Subsequently, the filtrate was inoculated onto the plate. After the plate was incubated overnight at 37°C, individual colony was successively re-streaked onto fresh 1.5% agar plates at least three times to obtain a pure colony.

After strain CCI9 was pre-grown overnight, the pre-culture was diluted to OD600 = 0.05 with fresh medium, the culture was incubated under several conditions. The OD600 was measured by monitoring the difference between cellular and cell-free turbidity values using an Eppendorf BioSpectrometer (Eppendorf, Hamburg, Germany). Growth of strain CCI9 was tested using Nutrient Broth (Kyokuto, Tokyo, Japan) at various temperatures (5-50°C) and pHs (4.0-11.0), and in the presence of various concentrations of NaCl (0-8.0%, w/v).

Genome sequencing was performed using a MiSeq (Illumina, San Diego, CA, USA) sequencer. Default parameters were used for all software unless otherwise specified. The de novo assembly of the raw data was carried out using A5-miseq ver.20160825 [7]. The tRNA and rRNA genes were detected using Prokka v.1.14.0 [8]. Genome annotation was performed using Prokka v.1.14.0 [8] and the eggNOG-mapper website v.2.0.0 [9]. Average nucleotide identity (ANI) values were calculated by pairwise genome comparison of genome sequences of strain CCI9 and E. roggenkampii EN-117T using the ANI algorithm [10] implemented within OrthoANIu tools [11]. The Venn diagram based on the predicted coding sequences was constructed using OrthoVenn2 [12]. To clarify differences between E. roggenkampii EN-117T and CCI9, the coding proteins were compared against the eggNOG database [9].

To obtain oligotrophs, filtrates were prepared from several soil samples such as compost, leaf soil, mud and peat moss. Subsequently, the filtrates were plated onto 1.5% agar (pH 7.2) without an additive carbon source or other medium components. After incubation overnight at 37°C, a single colony was obtained from the filtrate of leaf soil, which is a soil composed mainly of decaying leaves. A purified colony was obtained through standard dilution plating on the same plates, and this isolate was designated strain CCI9 (strain number: HUT-8146). By contrast, Escherichia coli MG1655, which is used to create a bioproduction strain in many studies, did not grow on a 1.5% agar (pH 7.2). Although some oligotrophic bacteria are inhibited by high nutrient mixtures [16, 17], the growth of strain CCI9 was not inhibited in Nutrient Broth or LB medium. The growth rate of strain CCI9 was similar to that of E. coli MG1655, when cultured in Nutrient Broth or LB media (Fig. 1A). In Nutrient Broth, the strain CCI9 was capable of growing at temperatures of 10°C to 45°C (Fig. 1B) and at pHs of 4.5 to 10.5 (Fig. 1C), as well as showed the optimal growth at 30°C and pH 7.0. Moreover, this strain was tolerant to 7.0% (w/v) NaCl (Fig. 1D). These results suggested that we had successfully isolated the desired oligotroph. 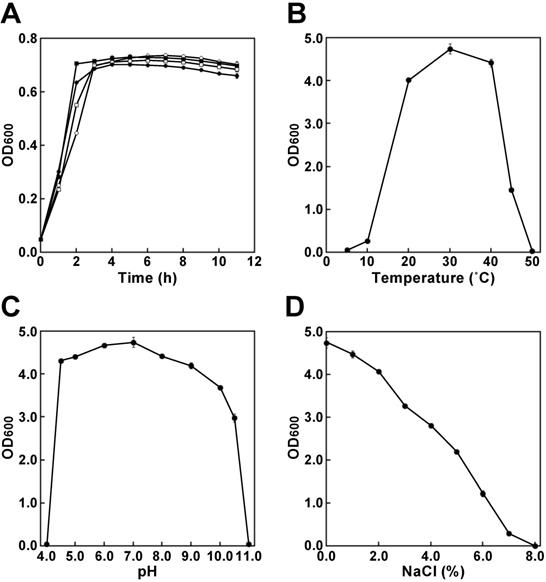 In this study, we described the isolation of strain CCI9, a bacterium capable of growth in nutrient-poor medium. After the draft genome sequence of strain CCI9 was determined, this isolate was identified as E. roggenkampii CCI9 based on MLSA and ANI value analysis. The draft genome sequence of E. roggenkampii CCI9 revealed their metabolic pathways, which is expected to use for the construction of engineered derivatives. Indeed, metabolically engineered Enterobacter strains for the production of acetoin have been constructed by inactivation of the by-product pathways [19, 20].

The draft genome sequence of E. roggenkampii CCI9 has been deposited in the DDBJ/EMBL/GenBank databases under accession numbers BLPJ01000001 to BLPJ01000028. The raw sequence reads have been deposited in DDBJ under BioProject number PRJDB9407 and BioSample number SSUB014344.

Phylogenetic tree constructed from analysis of the sequences of four housekeeping genes (atpD, gyrB, infB, and rpoB) and showing the relationships between strain CCI9 and the related Enterobacter type strains. The bar indicates a 0.02% nucleotide substitution rate. The tree was rooted using Klebsiella pneumoniae aeruginosa ATCC 13883T as the outgroup.

Venn diagram of the shared and unshared genes in E. roggenkampii EN-117T and CCI9. 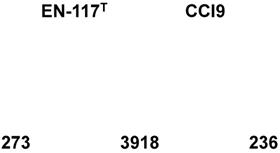 We thank Dr. Tatsuya Fujii for technical assistance with genome sequencing. We are grateful to all members of the Bio-conversion Research Group at our Institute [Research Institute for Sustainable Chemistry, National Institute of Advanced Industrial Science and Technology (AIST)] for their technical assistance and valuable discussions. This work was supported by a grant from JSPS KAKENHI to H. Akita (19K15743).

15. Tamura K, Nei M. Estimation of the number of nucleotide substitutions in the control region of mitochondrial DNA in humans and chimpanzees. Mol Biol Evol. 1993;10:512-526