Initial efforts to sequence the genome of the marine diatom Skeletonema marinoi were hampered by the presence of genetic material from bacteria, and there was sufficient material from some of these bacteria to enable the assembly of full chromosomes. Here, we report the genome of strain SMS9, one such bacterial species identified in a non-axenic culture of S. marinoi strain ST54. Its 5,482,391 bp circular chromosome contains 4,641 CDSs, and has a G+C content of 35.6%. Based on 16S rRNA comparison, phylotaxonomic analysis, and the genome similarity metrics dDDH and OrthoANI, we place this strain in the genus Kordia, and to the best of our knowledge, this is the first Kordia species to be initially described from European waters. As attempts to culture this strain have failed, however, the specifics of its relationship with S. marinoi are still uncertain.

A variety of different bacteria are known to be associated with diatoms, and their interactions can take a variety of forms, ranging from mutually beneficial to parasitic [1]. One side-effect of these associations is the difficulty of obtaining an axenic diatom culture for the purposes of genome sequencing. Such problems were encountered during attempts to sequence the genome of the chain-forming marine diatom Skeletonema marinoi strain ST54, resulting in the assembly of both diatom and bacterial contigs. However, as complete bacterial chromosomes were discovered in the assembly, the opportunity was taken to gain insight into bacteria which may form part of this diatom strain's microbiome. One of the bacterial chromosomes assembled in this way was that of strain SMS9, which we present here.

Subtree taken from an outgroup-rooted phylogenetic tree of 734 species, highlighting the position of strain SMS9 (in red) within the Flavobacteriaceae; other Kordia species are underlined in blue (note the distant location of K. sp. isolate NORP58 relative to the other Kordia species). Crocinitomix algicola (accession no. LYPF00000000) and C. catalasitica (accession no. JHXV00000000) were used as the outgroup, belonging to Crocinitomicaceae, a sister family to Flavobacteriaceae within the order Flavobacteriales. Adapted from tree generated using PhyloPhlAn version 0.99 [6], and visualised using FigTree version 1.4.3 [16]. Branch labels represent bootstrap values; scale bar indicates the mean number of substitutions per site.

Due to the nature of the assembly process, overlapping sequences were present at each end of the contig. Two 4,227 bp regions at the start and end of the contig, respectively, were identified by BLASTn as being almost identical to one another [4], and the region at the start of the contig was manually removed. The corresponding ends were then joined, and the PacBio reads were realigned to this sequence using the RS_Resequencing.1 protocol on SMRT Portal [2], to ensure that read coverage was consistent across the join, supporting a true circular molecule. This protocol includes a correction step using the Quiver algorithm [2], and was run an additional two times for further polishing. The final result is a circular chromosome of 5,482,391 bp, with G+C content of 35.6% and average read coverage of 67.46x. As this chromosome was assembled from a metagenome, we do not know whether any plasmids are also present in this strain; however, to the best of our knowledge, no other Kordia species described so far has been reported to contain a plasmid. Annotation of strain SMS9 was performed using the prokaryotic annotation software Prokka version 1.12beta [5], which inferred 4,641 CDSs (2,747 protein-coding genes with a functional prediction and 1,894 labelled as hypothetical), 6 pseudogenes, 63 tRNAs, 9 rRNAs, 6 ncRNAs, and one tmRNA.

A phylotaxonomic analysis was performed using PhyloPhlAn version 0.99 [6], comparing strain SMS9 to all whole-genome sequenced Flavobacteriaceae species available on NCBI's RefSeq ftp site (ftp://ftp.ncbi.nlm.nih.gov/genomes/refseq/bacteria/; accessed 16 October 2018), in addition to Kordia sp. isolate NORP58 (accession no. NVVR00000000; [7]), which was obtained from GenBank (ftp://ftp.ncbi.nlm.nih.gov/genomes/genbank/bacteria/; accessed 16 October 2018) (Figure 1). With the exception of isolate NORP58, which appears more distantly in the tree, the remaining Kordia species form a well-supported clade which includes strain SMS9 (bootstrap value 1). While the relationships within the clade are less well-supported, this result supports the placement of strain SMS9 within the genus Kordia. Further evidence for this placement was found when comparing the 16S rRNA sequences of strain SMS9 to those of other Kordia strains: 16S similarity to K. jejudonensis strain SSK3-3T (accession no. LBMG00000000; [8]), K. algicida strain OT-1T (accession no. ABIB00000000; [9],[10]), K. periserrulae strain DSM 25731T (accession no. QBKT00000000; [11]) and K. zhangzhouensis strain MCCC 1A00726T (accession no. LBMH00000000; [12]) fell between the proposed species and genus thresholds of 98.7% and 95%, respectively [13], implying that strain SMS9 may belong to an as-yet undescribed Kordia species. Lastly, this placement is supported by the use of the genome similarity metrics dDDH ([14]; calculated using Formula 2 of the Genome-to-Genome Distance Calculator version 2.1 [https://ggdc.dsmz.de/]) and OrthoANI (calculated using OAT version 0.93.1 [15]). Comparison of strain SMS9 to the sequenced Kordia genomes available at NCBI (as mentioned above) gave OrthoANI values of between 69.29% and 81.10% (below the species delineation threshold of 95-96%), and dDDH values of between 18.00% and 24.20% (below the species delineation threshold of 70%, and a figure comparable to other Kordia-Kordia comparisons) (data not shown). Taken together, we propose that strain SMS9 represents a new species within the genus Kordia. As such, we believe this to be the first Kordia species to be initially described from European waters. A comparison of assembly and annotation statistics of strain SMS9 and other Kordia strains is presented in Table 1.

To try and identify genes potentially denoting novel Kordia functionality in strain SMS9, protein sequences obtained from the annotation were subjected to tBLASTn against a database of the other sequenced Kordia genomes, as noted above [4]. Sequences which returned no hits were then subjected to BLASTp to ensure that no further Kordia hits were found [4]. In this way, 23 proteins were found which do not appear to be present in other known Kordia strains. Of these, 21 were labelled as 'hypothetical protein', one was labelled as 'DinB family protein' (although other 'DinB family proteins' are noted for Kordia strains in NCBI), and one was labelled as 'DUF3164 family protein'.

The related species (and type species for the genus) Kordia algicida was first isolated from an algal bloom of the diatom Skeletonema costatum [9], itself related to Skeletonema marinoi, the diatom from whose culture strain SMS9 was obtained. As the name suggests, K. algicida has been shown to be capable of lysing and killing various algae, a process regulated in a quorum sensing-dependent manner [9],[18]. However, as attempts to isolate strain SMS9 from S. marinoi cultures have proven unsuccessful, and the genes behind the aforementioned lysis and quorum sensing remain unknown, further work is required before we can determine whether strain SMS9 and S. marinoi share a similar relationship to that found between K. algicida and S. costatum. 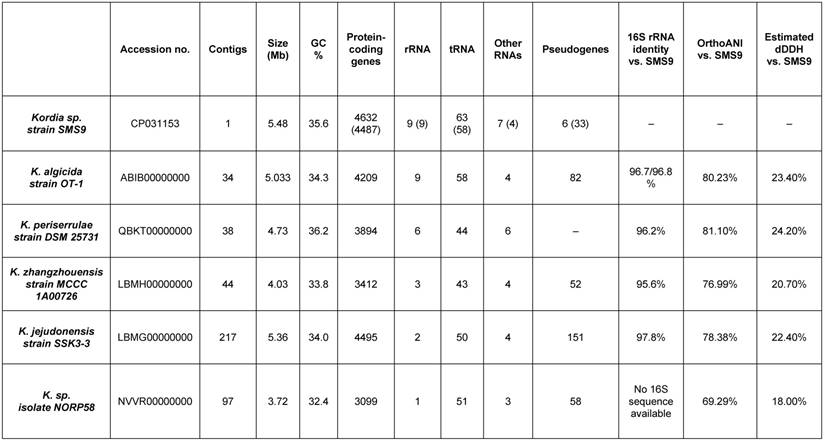 This whole-genome project has been deposited in GenBank under the accession number CP031153, as part of BioProject No. PRJNA380207.

We thank the Linnéus Centre for Marine Evolutionary Biology (CeMEB, http://cemeb.science.gu.se/) for support. All bioinformatics analyses were run on the Albiorix computer cluster (http://albiorix.bioenv.gu.se/) at the Department of Marine Sciences, University of Gothenburg.