Perumytilus purpuratus is a marine mussel considered a bioengineer species with a broad distribution in the Pacific and Atlantic coast of South America. Studies have shown two geographically and genetically differentiated subpopulations at molecular level and in sperm morphological traits. To open avenues for molecular research on P. purpuratus, a global de novo transcriptome from gonadal tissue of mature males was sequenced using the Illumina platform. From a total of 126.38 million reads, 37,765 transcripts were successfully annotated. BUSCO analysis determined a level of 89% completeness for the assembled transcriptome. The functional gene ontology (GO) annotation indicated that, in terms of abundance, the transcripts related with molecular function were the most represented, followed by those related with biological process and cellular components. Additionally, a subset of GO annotations generated using the “sperm” term resulted in a total of 1,294 sequences where the biological process category was the more represented, with transcripts strongly associated to sperm-processes required for fertilization, and with processes where the sperm-egg interaction could be implicated.

Our work will contribute to the evolutionary understanding of the molecular mechanisms related to tissue-specific functions. This work reports the first male gonad transcriptome for the mussel P. purpuratus, generating a useful transcriptomic resource for this species and other closely related mytilids.

The marine mussel Perumytilus purpuratus (Mytilidae) is a dominant competitor and an ecosystem engineer forming extensive beds in the intertidal rocky zone [1]. This species inhabits throughout a broad latitudinal distribution comprising the Pacific Ocean, from Guayaquil in Ecuador (3ºS) to Cabo de Hornos (56ºS) in Chile [2], and up the south Atlantic coast (41ºS) of Argentina [3]. Recently, in a macro-scale work using microsatellite markers was proposed a biogeographical break in P. purpuratus ca. 40º South latitude, where two groups genetically divergent were identified northward and southward of the 40ºS [4]. Moreover, in phylogenetic studies using nuclear and mitochondrial markers, congruent phylogeographic patterns with such biogeographical break have also been observed [5, 6].

Morphological traits in sperm of P. purpuratus were compared and geographic intra-specific variation in spermatozoa traits of this mussel was observed [5], consistent with the phylogeographic patterns and genetic divergence previously reported. Sperm morphological traits have been used in systematic studies to differentiate closely related species, and in general sperm ultra-structure appears to be highly conserved at the species level [7, 8]. Accordingly, the sperm proteins play an important role in the process of speciation [9]. In this context, the recent developments in high-throughput sequencing techniques such as the whole transcriptome sequencing (RNAseq) have enabled large-scale analysis of genetic variation and gene expression in different tissues and species [10]. Furthermore, RNAseq is an effective way to discover genes participating in specific biological processes when genome reference or genome sequence is not available [11], as it is the P. purpuratus case. The aim of this study was to characterize the male gonad transcriptome of P. purpuratus. The information generated herein, may be used in future integrated analysis using transcriptome and proteomic data on this species and will allow the identification of a list of reproduction-related genes that could be useful to determine if populations of P. purpuratus are undergoing cryptic speciation mediated by reproductive isolation processes. Finally, our work represents the first transcriptomic resource for P. purpuratus and a reference transcriptome for closely related species.

For the characterization of the male gonad transcriptome, individuals of P. purpuratus were collected from the mid-intertidal zone off the coast of Valparaíso, Chile (32º57'S/71º33'W). In this species, sex can be easily determined based on gonad and mantle tissue colour, with male displaying a range of light colours (i.e. between white and yellow) and female showing browner coloration [3]. Gonadal tissue was obtained from mature males, preserved in RNAlater (Life Technologies), and stored at -80°C until use. To allow the optimization of RNA extraction, the total gonadal RNA for eight samples was extracted using the E.Z.N.A Total RNA Kit II (Omega Biotek), and then the sample of higher quality and concentration was selected for sequencing and library construction. mRNA enrichment and cDNA library construction were carried out using the Illumina Tru-SeqTM Stranded Total RNA Library Preparation Kit with Ribozero (human/mouse/rat). The cDNA was sequenced on an Illumina Hiseq 2500 using 100 bp paired-end reads. Sequencing was performed by STAB Vida (Lisboa, Portugal).

The de novo transcriptome assembly for the gonadal tissue in P. purpuratus was performed using Trinity (Release 2013-11-10) [12]. The adapters and low quality bases were trimmed using the tool Trimmomatic [13]; reads or bases with Q ≤ 30 and with less than 36 bp in length were removed. The obtained transcripts were then annotated using Blast searches on the Swiss-Prot database [14] using an e-value threshold of 1E-05. To perform the quantitative assessment of the assembly and completeness, the BUSCO software version 3.0.2 (Benchmarking Universal Single-Copy Orthologs) [15] was applied using default setting and the Metazoa gene set as a reference, which consists of 978 single-copy genes. Later, the transcripts were annotated to the three principal functional categories: biological process, molecular function and cellular components using Blast2GO [16] where both the second and third levels were annotated with GO terms [17].

Similar to the results of previous studies of molluscs and other invertebrates, total RNA extractions yielded a single non-degraded ribosomal RNA band that had the same size as that typical of 18S rRNA [18]. The co-migration of 28S and 18S rRNA fragments prevented us from using the RNA Integrity Number (RIN); thus only the absence of RNA degradation was considered [18].

Even though a total of 385,288 transcripts were observed, a lower percentage of these (9.9%) were successfully annotated to the functional GO terms. Although this result seems to be quite low, a similar percentage of GO annotations have been reported in other non-model molluscan species, such as in pearl oysters [21] and the mussel Perna viridis [22]. The lower percentage of GO annotations is probably related to the fact that the number of results from the BLAST search for the de novo transcriptomes in a non-model species is highly dependent on the availability of the annotated sequence information for a reference genome [23, 24]. For instance, an increased percentage of GO annotations (> 25%) were shown in mollusc species with a large transcriptome characterization, as in the case of Haliotis species [25] and in mussels of the genus Mytilus [26].

The functional annotations of the gene ontology (at second-level) showed that 34,763 transcripts were related to biological processes (i.e. 91.50% of the total GO annotated transcripts), 35,423 (93.24%) were involved in molecular functions, and 34,246 transcripts (90.14%) were associated with cellular components (Fig. 1). Among the total number of transcripts, 31,148 (81.99%) were associated to at least one of the three ontology categories; thus, most of the annotated genes were involved in multiple biological functions (Fig. 1). The functional descriptions of the basic GO categories, for the second and third-level, are shown in Fig. 2. 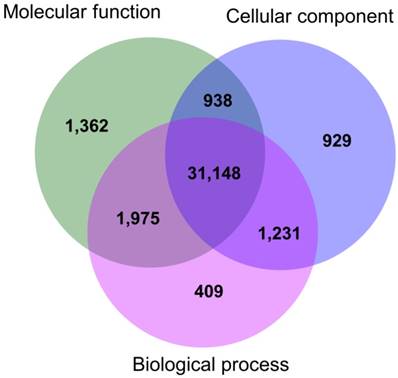 Representing the basic processes performed by the organism, the biological process was the most diverse category for both the second and third level, where the three principal GO terms were associated to cellular (95%), single organism (90%) and metabolic (83%) processes (Fig. 2A). Conversely, the molecular function category was the least variable (Fig. 2B) with transcripts that were associated principally to binding processes (93%) and catalytic processes (58%) terms. Among molecular function, we also found that in the third level, binding-related transcripts had different binding targets. Specifically, protein-binding term was associated with the highest number of transcripts (80%). Finally, the annotated transcripts associated with cellular components (Fig. 2C), indicate that the basic cellular terms were successfully identified. In this category, most transcripts were assigned to cell and organelle-related genes and were involved in some type of cellular structural organization. Details of the number of transcripts involved in the second and third-level for each GO category are shown in the Electronic supplementary material. 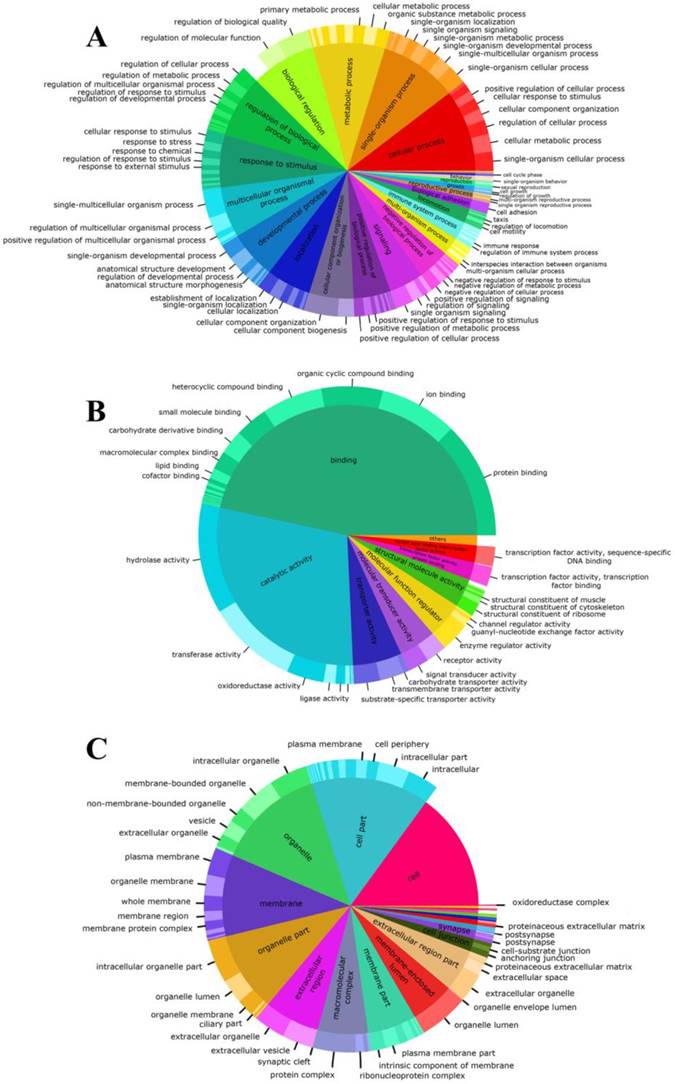 In addition, a specific subset of GO annotations was generated using the “sperm” term. As result, a total of 1,294 sequences were assigned to the three functional GO categories, being the biological process category the more highly represented (1,002 sequences), followed by cellular component (282 sequences) and molecular function (10 sequences). In this search, many transcripts were related to sperm-specific processes. Accordingly, the transcripts from cellular component category were related to specific sperm structures as for instance, the acrosomal vesicle (GO: 0001669), sperm flagellum (GO: 0097223) and sperm midpiece (GO: 0097225). Whereas biological process transcripts were strongly associated to sperm-processes required for fertilization such as spermatogenesis (GO: 0007283), sperm capacitation (GO: 0048240), sperm motility (GO: 0030317) and sperm ejaculation (GO: 0042713), and also processes where the sperm-egg interaction could be implicated such as prevention of polyspermy (GO: 0060468), regulation of fusion of sperm to egg plasma membrane (GO: 0043012), fusion of sperm to egg plasma membrane (GO: 0007342), sperm-egg recognition (GO: 0035036) and binding of sperm to zona pellucida (GO: 0007339).

Gamete-recognition proteins, particularly in free-spawning marine invertebrates [27-29], have been widely studied. The evidence suggests that these proteins often evolve rapidly [30] and could have an important role on reproductive isolation during early stages of the speciation process [30]. Nevertheless, to identify more accurately gamete-recognition proteins, such as binding-sperm proteins, future experimental analyses should compare the gonad transcriptome expression profiles in males and females of P. purpuratus at different maturation stages. Finally, our de novo transcriptome and its functional annotations provide a valuable molecular resource to improve our knowledge of reproductive and fertilization-related genes in P. purpuratus.