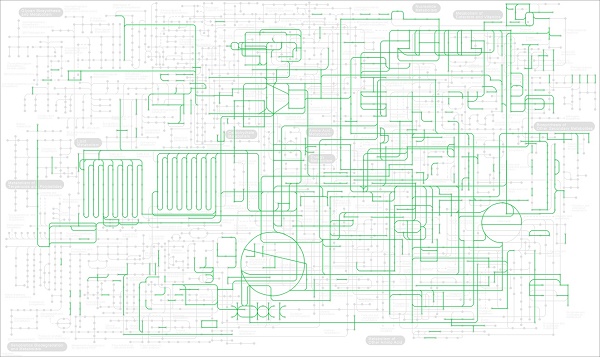 Bromate is a byproduct of the ozone disinfection of drinking water. It is a genotoxic carcinogen and causes renal cell tumors in rats. Physicochemical removal of bromate is very difficult, making microbial reduction of bromate to bromide a promising approach to eliminate bromate from water. Rhodococcus sp. Br-6, isolated from soil, can efficiently reduce bromate by using acetate as an electron donor. We determined the draft genome sequence of Rhodococcus sp. Br-6 for the potential practical application of the bromate-reducing bacterium. Core genome phylogeny suggests that the Br-6 strain is most closely related to R. equi. The Br-6 genome contains genes encoding multiple isoforms of diaphorase, previously found to be involved in Br-6-mediated bromate reduction. The genes identified in the present study could be effective targets for experimental studies of microbial bromate reduction in the future.

Chemical compounds are purified by multiple treatment steps at water treatment plants. Common filtration treatments do not remove fungal odor and agricultural chemicals so ozone treatment is commonly used. Bromate is a disinfection byproduct of ozone treatment and is formed from the bromide ion [1]. Bromate is a genotoxic carcinogen that causes renal cell tumors in rats. However, as long as ozone treatment is carried out, it is very difficult to completely remove bromate from the water. The microbial reduction of bromate to bromide is a promising way to remove bromate from drinking water and bromate reduction in biologically activated carbon (BAC) filters can reduce bromate [2]. Several studies have indicated that bacterial communities catalyze bromate reduction. However, to date, few bacteria from such communities have been isolated as pure cultures, and the mechanism of bacterial bromate reduction has not been elucidated. A soil bacterium Rhodococcus sp. Br-6 was previously isolated from soil in Matsudo-city, Chiba, Japan [3]. Strain Br-6 completely reduced 250 μM bromate within 4 days in the presence of acetate as an electron donor under microaerophilic conditions. Interestingly, the bromate reduction rate of strain Br-6 was much faster than that described for other bromate-reducing bacteria [3].

The genus Rhodococcus comprises more than 40 species, and is widely distributed in the environment [4]. Rhodococcus species have been used for various biotechnological applications including the production of acrylates and bioactive steroids, and fossil fuel desulfurization due to their biodegradative abilities [5]. We determined the draft genome sequence of Rhodococcus sp. Br-6 to understand its detailed metabolism and for the future practical application of bromate-reducing bacteria. We used multiple databases to identify genes involved in bromate reduction by strain Br-6 and assigned functional protein annotations. We also compared the genome sequence of Br-6 with that of sequenced Rhodococcus strains to reconstruct the genome-based phylogenetic tree and to assess the conservation of Br-6 genes in other Rhodococcus genomes.

For comparative analysis with Rhodococcus sp. Br-6, RefSeq data for the genome sequences of Rhodococcus species including R. defluvii and R. equi [11][12] (Table 1) were downloaded from NCBI FTP Site (ftp://ftp.ncbi.nlm.nih.gov/genomes/) [13] in December 2016.

Homologous groups of genes (representing “protein families”) from multiple Rhodococcus genomes were built using the pan-genome analysis pipeline Roary with the minimum BLASTP percentage identity of 80 [14]. Nucleotide sequence alignments for genes present in a single copy in every genome (“core-genome”) were produced using MAFFT [15]. A phylogenetic tree for the concatenated core gene alignment was reconstructed using the GTR+CAT model of FastTree version 2.1.9 [16]. Based on previous phylogenetic studies [12][17], R. triatomae, R. jostii, R. opacus, and R. erythropolis were used as an outgroup for tree rooting. The “drop.tip” function of the package APE (version 5.0) in R (version 3.4.3) was used to remove the outgroup of the phylogenetic tree. The phylogenetic tree was drawn using FigTree version 1.4.3 (http://tree.bio.ed.ac.uk/software/figtree/).

To assess the conservation of the protein-encoding genes of strain Br-6 in other Rhodococcus strains, we performed TBLASTN searches with the E-value cutoff of 1e-5 [9] to compare strain Br-6 protein sequences with whole nucleotide sequences of 13 Rhodococcus strains. This approach can detect genes that were missed due to differences in gene finding algorithms.

Previously, based on the 16S rRNA gene sequence analysis, the Br-6 strain was reported to be most closely related to R. equi [3]. In the present study, 839 core genes were used to infer the phylogenetic relationships between the 13 Rhodococcus strains. The phylogenetic tree, inferred from concatenation of the core genes (Figure 1), demonstrated that strain Br-6 and R. equi strains 103S and DSM 20307T formed a clade to which R. defluvii is the sister species. The core genome phylogeny suggests that strain Br-6 belongs to the species R. equi.

Phylogenetic tree obtained from a concatenated nucleotide sequence alignment of the 868 core genes of 13 Rhodococcus strains. The horizontal bar at the base of the figure represents 0.008 substitutions per nucleotide site. All the internodes exhibited highest local support values of 1.0. 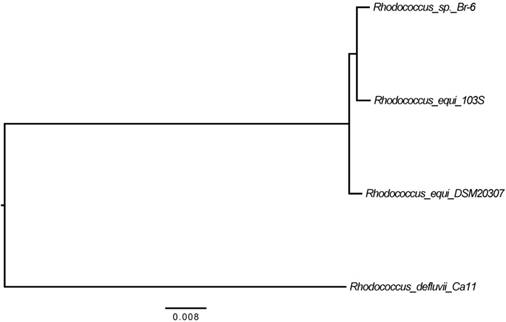 Tamai et al. (2016) suggested that diaphorase is involved in bromate reduction by strain Br-6, and that strain Br-6 has multiple isoforms of diaphorase [3]. Some dihydrolipoyl dehydrogenase (DLD) enzymes have NADH-dependent diaphorase activity [19]. The Br-6 genome contains the lpdC gene, which encodes DLD (locus_tag: Br6_03586; UniProt: E4W8R5). The DLD protein sequence was used as a query in a BLASTP search (E-value < 1e-5) against all the strain Br-6 predicted protein sequences to identify DLD homologues. The lpdC protein has low percentage identity (ranging from 25% to 31%) with all 10 reductase encoding homologs (Table 2), including the lpdA gene, annotated as “NAD(P)H dehydrogenase” (locus_tag: Br6_00169) or “flavoprotein disulfide reductase” (UniProt: E9T344), and the merA gene, annotated as "mercuric reductase" (Br6_01549) or "putative dihydrolipoyl dehydrogenase" (UniProt: E4WE66). The lpdC, lpdA, and merA genes were also annotated as “dihydrolipoamide dehydrogenase [EC:1.8.1.4]” (KEGG: K00382). These results suggest that these homologous genes encode multiple diaphorase isoforms. The genes identified here could be effective targets for future experimental studies.

The whole Rhodococcus sp. Br-6 genome shotgun sequence has been deposited at DDBJ/EMBL/GenBank under the accession number BDGK00000000. The version described in this paper is the second version, BDGK02000000.

We thank Nao Takeuchi for providing helpful comments about the manuscript. This work was supported in part by research funding from Keio University, Yamagata Prefecture and Tsuruoka City. Computational resources were provided by the Data Integration and Analysis Facility, National Institute for Basic Biology.

The authors declare that there are no conflicts of interest.