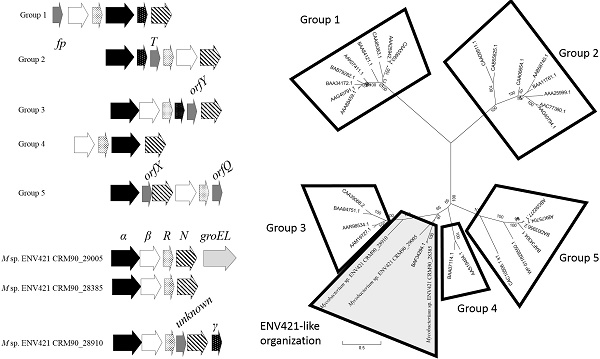 Methyl tert-butyl ether (MTBE) is a ground water contaminant with plausible carcinogenic properties. Mycobacterium sp. strain ENV421 cometabolically degrades MTBE and other ethers during the growth on propane as a carbon source. In this study, the 6.2 Mb genome of strain ENV421 was deciphered. The genome sequence revealed the presence of numerous putative propane catabolic genes including genes encoding hydrocarbon oxygenases and short chain alcohol dehydrogenases. These data provide the basis for the elucidation of propane metabolic pathways in strain ENV421 and its application for the remediation of ground water contaminated with toxic ethers.

Propane is a gaseous three-carbon (C3) alkane. Many bacteria have been isolated for their ability to grow on propane as a sole source of carbon and energy [1-4]. Growth on propane often supports cometabolism of many xenobiotics, including trichloroethylene, tert-butyl ether, ethyl tert-butyl ether, tert-amyl methyl ether, N-nitrosodimethylamine (NDMA) and 1, 4-dioxane [1, 2, 5-7]. Propane oxygenases, enzymes responsible for the initial oxidation step of the propane metabolic pathway, are postulated to be responsible for the cometabolic removal of pollutants [2, 7]. Thus, the identification of propane-inducible genes, in particular the propane oxygenases, is of interest for understanding not only the metabolic pathway of propane but also the basis behind the catabolic versatility of propane-grown cells and their application in the remediation of environmental pollutants.

The involvement of methane and liquid alkane oxygenases in propane oxidation has been detected [6, 16-18]. Heterologously expressed or partially purified sMMO and pMMO have been shown to oxidize propane [16, 18]. While the substrate range of AlkB and CYP153 are typically limited to medium chain alkanes, in vivo evolution enabled them to oxidize propane [19]. Recently, homologues of sMMO were found in propanotroph, and named propane monooxygenase (Prm) [3, 4, 6]. Genetic knockout of a Prm-encoding gene in Rhodococcus sp. strain RHA1, Mycobacterium smegmatis MC2155 strain, and Gordonia sp. strain TY-5 abolished their growth on propane [4, 6, 20].

A link between the hydrocarbon-oxygenases and the oxidation of environmental contaminants has been documented [23, 24]. In Pseudonocardia sp. ENV478, the reduced expression of SDIMO (tetrahydrofuran monooxygenase) lowered the rate of degradation of 1, 4-dioxane [23]. E. coli heterologously expressing toluene-2 MO, toluene-p-MO, toluene-4-MO, propane MO, or tetrahydrofuran MO have exhibited 1,4-dioxane oxidizing activity [24]. A SDIMO knockout mutant of Rhodococcus sp. strain RHA1 lost its ability to oxidize NDMA [6].

Mycobacterium strain ENV421 was isolated from a propane-enrichment culture and was shown to cometabolically degrade methyl tert-butyl ether (MTBE) [1]. Our earlier PCR-based screening revealed the presence of three oxygenase-encoding genes, namely SDIMO, cytochrome P450 genes, and alkB in ENV421 [25]. Reverse transcriptase-PCR has revealed that all three genes were expressed when grown on propane as a sole source of carbon, but not in succinate-grown cells [25]. Despite their propane-inducible expression pattern, their involvement in propane metabolism remains unknown. ENV421's CYP153, PMO and AlkB were individually cloned and expressed in E. coli host [25]. While E. coli cell lysates containing ENV421-AlkB or CYP153 exhibited octane (C8)-oxidizing activity, none of the lysates oxidized propane [25].

In this study, the genome sequence of ENV421 was determined with the intention of discovering additional hydrocarbon oxygenase-encoding genes and to further gain a comprehensive understanding of its catalytic versatility. We discovered the presence of genes encoding pMMO subunits, additional sMMO genes and several alcohol and aldehyde dehydrogenase genes. Comparison of the genome sequence of ENV421 and another propanotroph, Mycobacterium chubuense strain NBB4, revealed that two genomes commonly carry multiple genes encoding putative hydrocarbon oxygenases (such as SDIMO, CYP153, pMMO, and AlkB). However, the percent identity of protein sequences of each pair of oxygenases varied significantly, suggesting two genomes independently increased the repertoire of hydrocarbon oxygenase-encoding genes, mainly via multiple horizontal gene transfer events.

Genomic DNA was purified as described before [25]. A total of 25,733,000 paired-end reads were obtained by Illumina HiSeq 2500. The sequence was assembled using Velvet, yielding 169 contigs with a N50 of 153,052 (Table 1). The total size of the genome was estimated to be 6.2 Mb. The genome was annotated by NCBI Prokaryotic Annotation Pipeline. Functional annotation and classification was performed by RAST annotation server [26]. 6,075 genes with 6,024 open reading frames, 48 tRNAs and 3 rRNAs were identified. The draft genome has been deposited to the GenBank under the accession number PDHO00000000.

ENV421 exhibited a high sequence similarity of the 16S rRNA gene with these propanotrophs, however a comparison of the majority of the genome showed only a 20% or less sequence identity at the nucleotide level.

Many hydrocarbon oxygenase-encoding genes were identified in the ENV421 genome (Table 2). In addition to the three oxygenases discovered in earlier studies, several additional genes encoding hydrocarbon oxygenase subunits were identified. A total of three SDIMO loci are present in the ENV421 genome. Two CYP153 cytochrome P450 hydroxylases with more than a 53% identity to alkane-oxidizing CYP153 from Mycobacterium sp. HXN-1500 [12], as well as forty eight additional cytochrome P450 oxygenases were discovered. Two sets of operons for AlkB complex and a locus encoding particulate methane monooxygenase (pMMO) with its corresponding electron transferring subunits were also present.

All three SDIMO genes in ENV421 formed an operon consisting of a core of four subunits with identical gene order (α, β, coupling protein and reductase) (Figure 2). One operon with CRM90_29005 contained a chaperone encoding gene, while another operon containing CRM90_28910 included two additional orfs, one encoding protein with an unknown function and another encoding γ-subunit. The gene order of four SDIMO subunits is distinctive from any of the SDIMO sub-types, classified by Notomista and colleagues (Group 1-5 in Figure 2) [27].

The phylogenetic tree of the SDIMO α-subunit shows that all three SDIMO in ENV421 form a cluster, distinctively different from groups 3 and 4 (Figure 3). The gene order of the close homologues of ENV421's SDIMO from M. chubuense NBB4, M. PH-06, M. marium E11, M. forticum, M. lenti and M. sp. TY-6 were also identical to that of ENV421 SDIMO operons, suggesting that these sequences comprise a new subgroup of SDIMO.

It is interesting to note that despite ENV421 and one of the closest propanotrophs, M. chubuense NBB4, only having on average less than 40% sequence identity at nucleotide level, their genomic regions containing oxygenases (e.g. CRM90_29005 and CRM90_29545) exhibited much a higher sequence identity (>90%). Similarly, despite a relatively low phylogenetic distance between ENV421 and Gordonia amicalis (94% in 16S rRNA identity), the region containing the alkB gene cluster (CRM90_29325) shared a much higher similarity (99.5%). These data suggest that oxygenase-encoding genes in ENV421 were acquired recently from various organisms via horizontal gene transfer.

Phylogenetic tree of the α subunit of SDIMO. Groups 1-5, as described in Fig. 2, are diagrammatically shown in boxed regions. The set of sequences with an identical gene order as ENV421 SDIMOs are indicated with a shaded-boxed region. 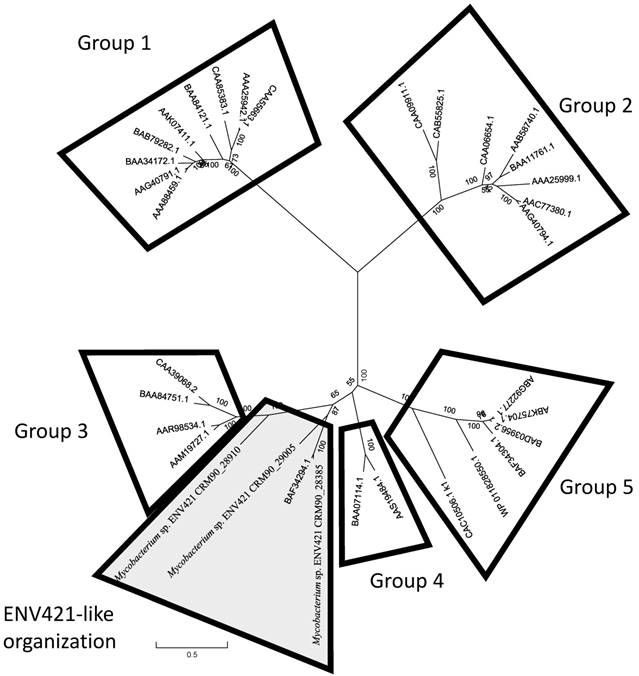 Our previous study showed that the expression of genes encoding for SDIMO, AlkB and CYP153 genes were upregulated by propane in ENV421 [25]. If SDIMO is responsible for propane metabolism in ENV421, both the terminal and the sub-terminal oxidation of propane would occur, forming 1-propanol and 2-propanol. In agreement with this idea, ENV421 is capable of growing on 1-propanol as a sole source of carbon [1]. Subsequent oxidation by alcohol and aldehyde dehydrogenases would produce propanoate, which would be further metabolized via the methylmalonyl-succinate pathway [22]. The presence of many short fatty acid CoA ligases, propionyl-CoA carboxylases (CRM90_03095, CRM90_05925), and methylmalonyl CoA mutases (CRM90_15015, CRM90_15020) in the genome supports this notion.

Although growth on 2-propanol was not detected, ENV421 can grow on acetone, the oxidation product of 2-propanol by alcohol dehydrogenase, as a sole source of carbon (unpublished data, Masuda). The genome sequence revealed the presence of pMMO, which exclusively produces 2-propanol upon the oxidation of propane [18]. These data suggest the possibility that propane is metabolized to 2-propanol and then to acetone. There are three acetone metabolic pathways that have been discovered in bacteria. In Xanthobacter strain Py2, acetone carboxylase converts acetone to acetoacetate [28]. In contrast, acetone was shown to be converted to methyl acetate by acetone MO in M. strain TY-5 [29]. The step wise oxidation of acetone to acetol, methy glyoxal, then to pyruvate has been proposed in strain JOB-5 [30]. The genome of ENV421 contains homologues of acetone MO (CRM90_22685) which shares a 43% sequence identity to that of strain TY-5, while it lacks a homologue of acetone carboxylase, suggesting that strain ENV421 may oxidize acetone via a pathway similar to that of strain TY-5. Further biochemical research will be needed to fully elucidate the propane metabolic pathway in ENV421.

Multiple putative hydrocarbon oxygenase-encoding genes were identified in strain ENV421. The genome contained many catabolic genes, providing a genetic basis for the versatility of propane-metabolizing bacteria. Their direct involvement in the oxidation of propane and ethers will be tested in future studies.