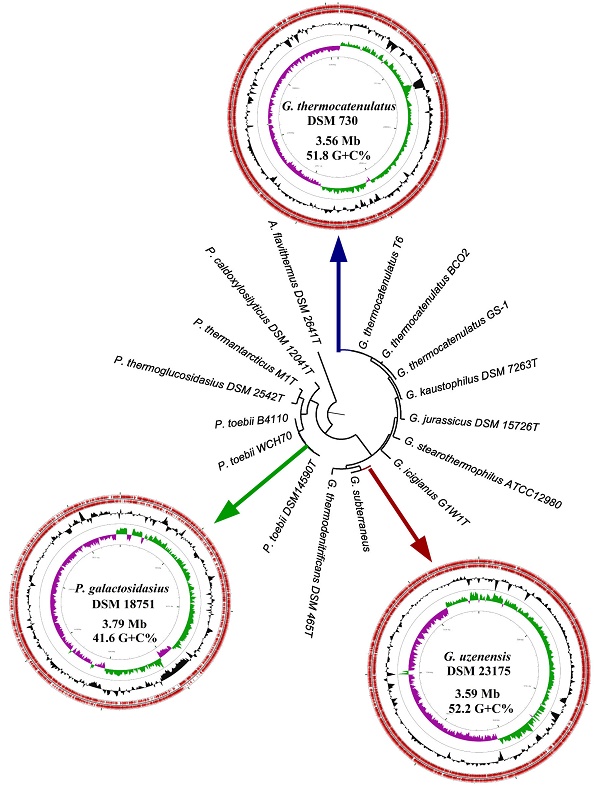 The 'geobacilli' are cosmopolitan thermophilic Firmicutes that are highly adaptable and consequently have been isolated from wide range of environments, including oil wells, deserts, hot springs, compost and soils [1]. The taxonomy of these bacteria has recently been re-examined through phylogenomics, resulting in the genus Geobacillus [2] being divided into two genera: Geobacillus and Parageobacillus [3]. These genera have been the subject of increasing interest because of their ability to produce a wide range of thermostable enzymes, such as amylases, proteases, lipases, hemicellulolytic enzymes and other industrially and biotechnologically relevant macromolecules [4-5]. The increasing availability and accessibility of complete genome sequences, together with the development of tools that allow for accurate functional annotation of genomic data, are enhancing the ways in which microorganisms can be studied and characterized [6]. Furthermore, these genome sequences provide a resource for tapping into the biotechnological potential of microorganisms. Elucidating the genome sequences of type strains is especially important for resolving the taxonomic status of microorganisms [7].

Currently, the genome sequences of sixty-eight Geobacillus and sixteen Parageobacillus strains are publically available. These include the genome sequences of eleven and five validly described type strains of Geobacillus and Parageobacillus, respectively. The genomes of the G. uzenensis DSM 23175T, G. thermocatenulatus DSM 730T [2] and P. galactosidasius DSM 18751T [8] were paired-end sequenced using the Illumina HiSeq platform (Illumina, Inc., San Diego, CA, USA). A total of 3.6 Gb (ca. 1,060x coverage), 3.8 Gb (ca. 1,059x coverage) and 3.7 Gb (ca. 964x coverage) of reads were generated for G. uzenensis DSM 23175T, G. thermocatenulatus DSM 730T and P. galactosidasius DSM 18751T, respectively. The reads were assembled using SPAdes [9], and the resulting contigs were further assembled using Multi-Draft based scaffolder (MeDusa3) [10] and Mauve 2.3.1 [11]. Finally, the genomes were annotated using RAST [12] and EggNOG 4.5.1 [13] and checked for completeness using BUSCO [14]. The genome sequences were assembled to high quality draft status (between two and ten contigs) and range in size between 3.56 and 3.79 Mb, coding for between 3,783 and 4,067 proteins (Table 1). A substantially lower G+C content was observed for the Parageobacillus genome (41.6%) compared to the Geobacillus spp. (51.8 and 52.2% respectively), which represents a distinguishing feature between the two genera [3]. Assessment of the three genomes using the Firmicutes dataset indicated that all the genomes were ca. 99.4% complete. Classification of proteins into their COG functional categories based on EggNOG showed similar proportions of proteins in the different functional groups among the three strains (Figure 1), although a larger proportion of proteins involved in metabolism are present in the two Geobacillus isolates (Figure 1A). In particular, there are a larger proportion of proteins involved in amino acid, carbohydrate and lipid metabolism in the Geobacillus strains (Figure 1B), suggesting that greater metabolic versatility exists in the Geobacillus strains compared to P. galactosidasius DSM 18751T. By contrast, an elevated number of proteins (334 proteins; 8.21% of total proteins) involved in DNA replication, recombination and repair (Figure 1B) in P. galactosidasius DSM 18751T compared to the other strains (246 and 244 proteins for DSM 730T and DSM 23175T, respectively) may indicate a distinct mobilome exists in the former strain. 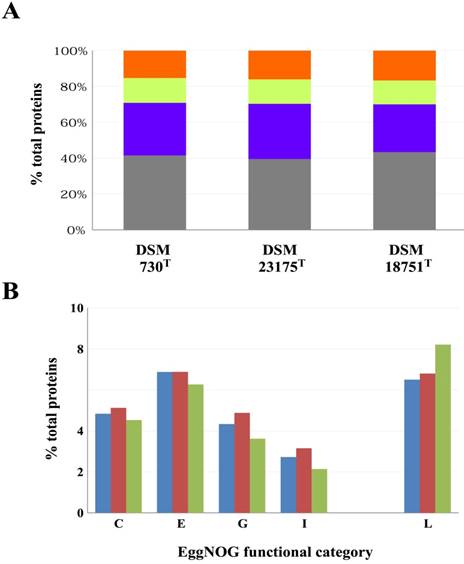 Several phylogenomic methods, including digital DNA-DNA Hybridization (dDDH) and Average Nucleotide Identity (ANI) calculations have been developed and have been shown to accurately distinguish between strains at the species level [19-20]. Pairwise BLAST-based Average Nucleotide Identity values (ANIb) were obtained using JSpecies [21], and dDDH values were calculated with the Genome-to-Genome Distance Calculator (GGDC 2.1), using formula 2 [19].G. thermocatenulatus DSM 730T showed the highest similarity with G. thermocatenulatus T6 with an ANI value of 99.7% and dDDH of 93.6%, which far exceeds the species cut-off thresholds of 96% and 70% for ANI and dDDH, respectively. Comparison of the 16S rRNA gene sequences indicated that the gene from G. uzenensis DSM 23175T showed 99.9% sequence identity with that of G. subterraneus DSM 13552T, while the two genomes shared 99.6% ANI and 93.1% dDHH values. Furthermore, the 16S rRNA gene of P. galactosidasius DSM 18751T shared 99.3% sequence identity with that of P. toebii DSM 14590T. Phylogenomic analyses indicated that the two strains had ANI and dDDH values of 98.2% and 87.9%, respectively, both of which exceed the threshold values for species circumscription. 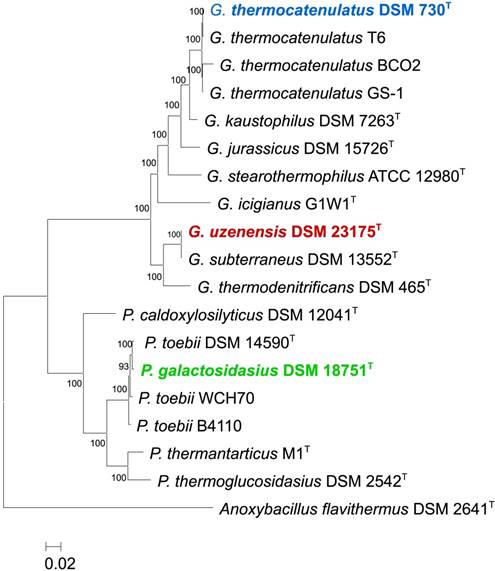 Based on these phylogenomic analyses, we can conclude that P. galactosidasius DSM 18751T and G. uzenensis DSM 23175T most likely represent later heterotypic synonyms of P. toebii and G. subterraneus, respectively, rather than type strains of distinct species as previously described. Conversely, we can conclusively characterize G. thermocatenulatus DSM 730T as the type strain for the species G. thermocatenulatus. Regardless of this, these genome sequences will be of additive value towards the exploration of the diversity among the geobacilli and to further explore the biotechnological potential of these Geobacillus and Parageobacillus species.

1. Zeigler DR. The Geobacillus paradox: why is a thermophilic bacterial genus so prevalent on a mesophilic planet?. Microbiol. 2014;160:1-11

17. Castresana J. Selection of conserved blocks from multiple alignments for their use in phylogenetic analysis. Mol Biol Evol. 2000;17:540-552