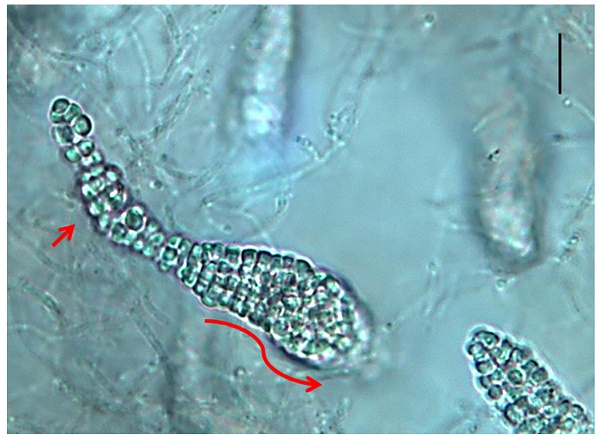 Frankia sp. strain CcI49 was isolated from Casuarina cunninghamiana nodules. However the strain was unable to re-infect Casuarina, but was able to infect other actinorhizal plants including Elaeagnaceae. Here, we report the 9.8-Mbp draft genome sequence of Frankia sp. strain CcI49 with a G+C content of 70.5 % and 7,441 candidate protein-encoding genes. Analysis of the genome revealed the presence of a bph operon involved in the degradation of biphenyls and polychlorinated biphenyls.

Soil dwelling actinobacteria of the genus Frankia form an endophytic symbiosis with actinorhizal plants, which are comprised of over 200 species from 8 angiosperm families [1, 2]. Actinorhizal plants in symbiosis with Frankia play important ecological roles as pioneer species and are used in agroforestry, land reclamation, crop protection, and soil stabilization projects [3]. Molecular phylogenetic approaches have identified four major clusters of Frankia that also follow host plant specificity groups [4-7]. Members of cluster 1 are divided into sub-cluster 1a that are infective on Alnus and Myricaceae and sub-cluster 1b strains which are infective on Allocasuarina, Casuarina and Myricacaeae. Cluster 2 represents strains infective on Coriariaceae, Datiscaceae, Dryadoideae and Ceanothus, while cluster 3 comprises strains that are infective on Colletieae, Elaeagnaceae, Gymnostoma and Myricaceae. Finally, cluster 4 groups Frankia strains isolated from actinorhizal nodules that are unable to undertake the nitrogen-fixation process (Fix-) and/or re-infect their host plant causing nodulation (Nod-) and are classified as “atypical Frankia”. Genomes for representatives from each cluster have been sequenced [8]. The availability of these Frankia genome databases has opened up the use of “omics” approaches. Analysis of Frankia genomes has revealed new potential in respect to metabolic diversity, natural product biosynthesis, and stress tolerance, which may aid the cosmopolitan nature of the actinorhizal symbiosis. 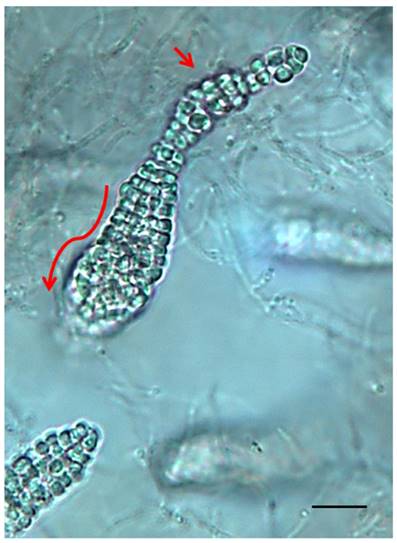 The assembled Frankia sp. strain CcI49 genome was annotated via the NCBI Prokaryotic Genome Annotation Pipeline (PGAP), and resulted in 7,411 candidate protein-encoding genes, 46 tRNA and 2 rRNA regions. The genome features of Frankia sp. strain CcI49 fall outside the realm of the other cluster 1b genomes, but similar to other cluster 3 isolates from Casuarina (Table 1). Phylogenetic analysis of the 23S rDNA shows that Frankia sp. strain CcI49 groups with the cluster 3 strains (Figure S1). The genome size and corresponding number of CDSs were larger than the typical cluster 1b, but fit within those values reported for cluster 3 genomes [8]. The genome also contained a nif, 2 hup, and 1 shc operons encoding the nitrogenase and uptake hydrogenase enzymes and the hopanoid biosynthetic pathway, respectively. The operons were organized similar to those reported for Frankia cluster 3 genomes [8].

1 The source of the isolate

Bioinformatic analysis of this genomes by the use of the AntiSMASH program [21] revealed the presence of high numbers of secondary metabolic biosynthetic gene clusters, which is consistent with previous results with other Frankia genomes including cluster 3 [8, 22]. Table 2 shows a comparison of the various profiles of different Frankia strains isolated from Casuarina for these secondary metabolic biosynthetic gene clusters. The profile of Frankia sp. strain CcI49 differed from those shown by Frankia strains that are able re-infect Casuarina and was similar to the pattern exhibited by the other two cluster 3 strains (R43 and G2) isolated from Casuarina nodules. These cluster 3 genomes contained more polyketide synthase (PKS) biosynthetic clusters than the cluster 1b genomes. The Frankia sp. strain CcI49 genome contained several unique clusters that had homologues in other bacteria or were completely novel.

In summary, the Frankia sp. strain CcI49 genome has revealed an interesting potential metabolic pathways and natural product profile, and serves as a representative of Frankia cluster 3. Further analysis of this genome and experimental evidence will be needed to support the predicted natural product profile and metabolic potential of Frankia sp. strain CcI49.

3 PKS: polyketide synthase including Type I, II, III, Trans-AT, and other types

This whole-genome shotgun sequence has been deposited at DDBJ/EMBL/GenBank under the accession number MOWP00000000.1. The version described in this paper is the first version, MOWP01000000.

Partial funding was provided by the New Hampshire Agricultural Experiment Station. This is Scientific Contribution Number 2471. This work was supported by the USDA National Institute of Food and Agriculture Hatch 022821 (LST), Agriculture and Food Research Initiative Grant 2015-67014-22849 from the USDA National Institute of Food and Agriculture (LST), the College of Life Science and Agriculture at the University of New Hampshire-Durham and the Science and Technology Development Fund (STDF), grant No. 900, as International Cooperation Project (SM and LST). Sequencing was performed on an Illumina HiSeq2500 purchased with an NSF MRI Grant: DBI-1229361 to WK Thomas.

3. Benson DR, Dawson JO. Recent advances in the biogeography and genecology of symbiotic Frankia and its host plants. Physiol Plantarum. 2007;130:318-30

8. Tisa LS, Oshone R, Sarkar I, Ktari A, Sen A, Gtari M. Genomic approaches toward understanding the actinorhizal symbiosis: an update on the status of the Frankia genomes. Symbiosis. 2016;70:5-16