De Novo Assembly of the Liver Transcriptome of the European Starling, Sturnus vulgaris 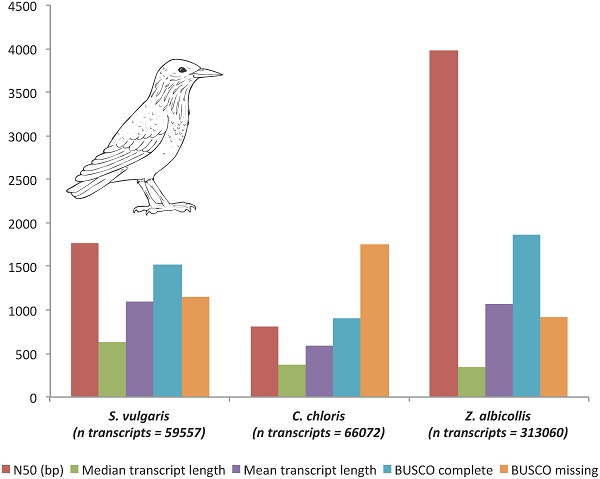 The European starling, Sturnus vulgaris, is a prolific and worldwide invasive species that also has served as an important model for avian ecological and invasion research. Although the genome sequence recently has become available, no transcriptome data have been published for this species. Here, we have sequenced and assembled the S. vulgaris liver transcriptome, which will provide a foundational resource for further annotation and validation of the draft genome. Moreover, it will be important for ecological and evolutionary studies investigating the genetic factors underlying rapid evolution and invasion success in this global invader.

The European starling is one of the best-studied avian species, yet no genomic resources existed prior to the recent draft genome (December 2015) and no transcriptome data sets are currently available. Starlings are also an important species in invasion genetics research, due to their global introduction history [1], their invasion success and their known patterns of morphological and genetic variation across introduced ranges [2-4], making them ideal for studies of rapid evolution replicated across invasions. However, these studies require improved genetic resources.

Transcriptome assembly and annotation statistics compared to other passerine transcriptomes.

Transvestigator v0.1 [10] was used to filter and prepare the raw transcriptome assembly for NCBI Transcriptome Shotgun Assembly (TSA). Briefly, we filtered poorly supported and lowly expressed transcripts if they had a transcript per million (TPM) value < 0.5 (7,873 transcripts) and an isoform expression level less than 5% of the parent unigenes expression (7,708 transcripts). Additionally, only those transcripts passing the above filter and containing a predicted ORF were kept (18,103 transcripts removed). Assembled sequences were queried against the UniVec database (Accessed January 2017) and any sequences with a strong match were removed (1/1,000,000 chance of a random match for queries of 350 Kb, terminal match score ≥ 24, internal match score ≥ 30). Lastly, preparation for TSA submission included ensuring there was only one ORF per transcript, the ORF was on the positive strand and contained within transcript coordinates, and that start and stop codons were properly created. The final filtered transcriptome contains 23,945 protein-coding transcripts from 18,678 'unigenes' (accessible via the NCBI TSA accession: GFDQ00000000). Overall, the filtering resulted in the removal of 1,545 transcripts that may have contained some protein-coding potential. As non-coding RNAs have key biological roles (rRNA, tRNA etc), may be significant in terms of adaptive processes and are useful for genome annotation we also provide the unfiltered transcripts (includes those not passing ORF filters, but meeting support and expression thresholds and those with ORFs not meeting expression thresholds) in the associated data repository [13]. Functional annotation was conducted utilising the Trinotate pipeline (http://trinotate.sourceforge.net) - these are also provided in the associated repository.

BUSCO evaluations of completeness against the vertebrate gene set compared to other passerine transcriptomes.

This resource will be useful for the validation of gene models predicted in the recent draft genome assembly and for future research into the physiology and ecology of this and other closely related species. In particular, these data will enable a greater understanding of the genetic factors underlying rapid evolution and invasion success in this global invader.

The datasets supporting the results presented here are available at http://dro.deakin.edu.au/view/DU:30091025 and doi: 10.4225/16/5893999965ac2 [13]. All raw sequencing data used in this study is available in the NCBI SRA and associated with the BioProject accession, PRJNA335913. The final transcriptome assembly has been deposited at DDBJ/EMBL/GenBank under the accession GFDQ00000000. The version described in this paper is the first version, GFDQ01000000.

We thank Peri Bolton for use of the starling image in our graphical abstract. This work was supported by funding from the Centre for Integrative Ecology at Deakin University, an ARC DECRA Fellowship to LAR and an ARC Linkage Project (0455776) to WBS. We thank Dan Selechnik for conducting RNA extractions for this study.

9. Li B, Dewey CN. RSEM: accurate transcript quantification from RNA-Seq data with or without a reference genome. BMC Bioinformatics. 2011;12:323