A total of eight Ensifer sp. strains were isolated from two pristine cave environments. One strain was isolated from a cave water pool located in the Wind Cave National Park, South Dakota, USA and the remaining seven strains were isolated from Lechuguilla Cave of Carlsbad Caverns National Park, New Mexico, USA. Whole genome sequencing and comparative genomic analyses of the eight isolates compared to various type strains from the genera Ensifer and Sinorhizobium demonstrates that although members in these genera can be phylogenetically separated into two distinct clades, the percentage of conserved proteins (POCP) between various type strains from Ensifer and Sinorhizobium are consistently higher than 50%, providing strong genomic evidence to support the classification of the genera Ensifer and Sinorhizobium into a single genus.

The type species for the genus Ensifer, Ensifer adhaerens ATCC 33212 was initially characterized due to its predation activity against other bacteria in addition to its nitrogen-fixing activity under nutrient-limited growth conditions [1]. The nitrogen-fixing genus Sinorhizobium were later found to be synonymous with the Ensifer. In addition, since the genus Ensifer were classified first, this synonymy was initially resolved by re-classifying members of the Sinorhizobium as Ensifer species. However, given that Sinorhizobium sp. were significant members of the rhizosphere, this created great consternation in the rhizobium scientific community [2]. Adding to this confusion was additional analyses that suggested a clear separation of the Ensifer and Sinorhizobium into two separate genera [3]. The recently published method for genus delineation based on protein conservation [4] and the availability of whole genome of various type strains in this group (including the recently published Ensifer adhaerens ATCC 33212) invite a genome-based investigation of the molecular taxonomy of the genera Ensifer and Sinorhizobium [1]. The goals of this study were aimed to: 1) improve taxon sampling of the genus Ensifer by sequencing and annotating eight additional genomes of Ensifer strains isolated from two pristine cave environments, 2) identify putative gene(s) associated with adaptation to cave environments and 3) utilize various genomic/proteomic information to resolve the question of whether the genera Sinorhizobium and Ensifer should be separated into two distinct genera or be combined into a single genus.

Pangenome analysis was performed with Roary (https://sanger-pathogens.github.io/Roary/) using a protein identity cut-off of 90% for clustering orthologs. Genus delineation was determined based on the percentage of conserved proteins (POCP) as described by Qin et al [4] whereby strains sharing pairwise POCP value of >50% belong to the same prokaryotic genus.

The genome size of the strains sequenced in this study ranges between 6.0 to 7.5 megabases with N50 and GC content ranging from 180,000 to 232,000 bp and 61.5% to 62.3%, respectively (Table 1). By rooting the constructed tree with several members of the order Rhizobiales as the outgroup, maximum likelihood inference based on the alignment of 400 conserved proteins shows a clear separation of the Ensifer/Sinorhizobium group into two clades (Clade I and Clade II) with maximal local support values inferred by the Shimodaira-Hasegawa test (SH-like local supports). Clade 1 consists of mainly strains from the genus Ensifer including the type strain E. adhaerens. On the other hand, Clade 2 consists of mostly strains from the genus Sinorhizobium including 3 type strains e.g. Sinorhizobium arboris LMG14919, Sinorhizobium saheli LMG7837 and Sinorhizobium fredii USDA205. Ensifer sojae CCBAU05684 is the only strain with Ensifer species designation that demonstrated monophyletic clustering within the “Sinorhizobium” clade. Based on phylogenetic clustering (within Clade 1; Fig. 1C), the cave isolates reported in this study were designated as members of the genus Ensifer. Additionally, these strains represent at least two genospecies of Ensifer distinct from the type species E. adhaerens ATCC 33499, as evidence by their pairwise average nucleotide identity of less than 85% (ANI of >95% indicates identical genospecies; Fig. 1A)[12]. The first cave genospecies consists of strains LC163, LC54, LC384 and SD006 and the second consists of strains LC11, LC14 and LC499.

Although the separation of Ensifer and Sinorhizobium into two distinct clades corroborates with previous study by Martens et al. [3] who observed similar separation based on the phylogenetic analysis of ten concatenated house-keeping genes (atpD, dnK, gap, glnA, gltA, gyrB, pnp, recA, rpoB and thrC), all pairwise POCP values among members of Ensifer and Sinorhizobium are consistently higher than 50% (Fig. 1B) thus providing convincing genomic evidence that they represent two major clades within the same genus.

Strain SD006, the only isolate from an aquatic cave environment, has the largest genome size among the eight cave isolates with more than 427,000 bps of additional genomic information than the strain that exhibits the smallest genome (LC11; Table 1). Pan-genome analysis of SD006 and members of its genospecies identified up to 2,106 unique genes. Functional annotation of this unique proteome in SD006 led to the identification of a gene coding for aquaporin (Uniprot entry: A0A0L8BEZ5; locus tag: AC244_32060). The aquaporin protein has been shown to be involved in regulating responses related to changes in environmental osmolality [13] that may be more prevalent in the isolation source of strain SD006 e.g. an aqueous environment, compared to a dry limestone surface where the seven other strains were isolated. The putative aquaporin protein has the highest similarity score of 82.8% (as of 15th August 2016) to Uniprot entry A0A072CG14 from the soil isolate Sinorhizobium americanum CCGM7.

Phylogenetic analysis of cave strains (SD006, LC11, LC13, LC14, LC54, LC163, LC384 and LC499) with other members of Rhizobiales and their genomic similarity. (A) Heatmap showing pair-wise average nucleotide identity based on MUMMER calculation (ANIm) among the cave isolates and Ensifer adhaerans ATCC 33499T. (B) Percentage of conserved proteins (POCP) comparison of strains among the Ensifer/Sinorhizobium clades and strains from the Sphingomonadaceae family designated as “S” in the X-axis. Red horizontal line indicates 50% cutoff value. (C) Maximum likelihood tree of the order Rhizobiales. The tree was rooted using members of the family Sphingomonadaceae as the outgroup. Type strains are indicated by the superscript letter “T”. Values in nodes depict local SH-support and branch length indicates the number of substitution per site. 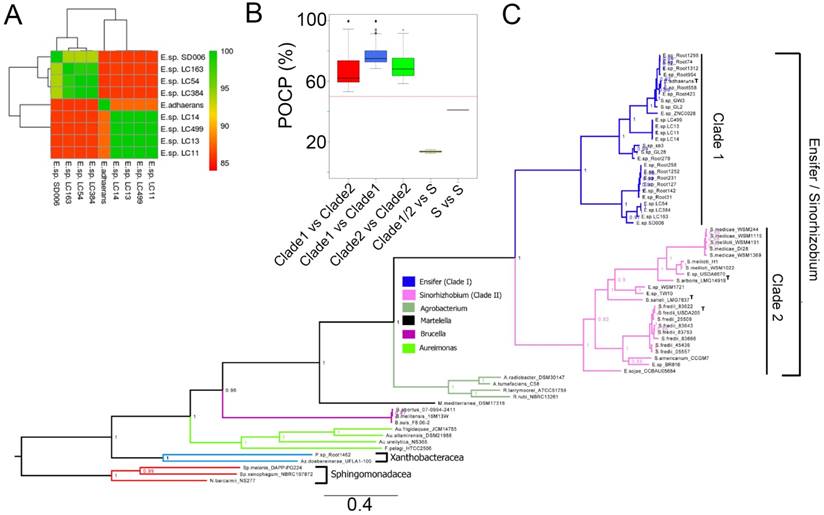 The availability of whole genome sequences of seven Ensifer sp. will be useful for the identification of genes associated with bacterial predation and/or cave adaptation in members of the genus Ensifer.

HKSK, WWHE, MHT and HMG thank the Monash University Malaysia Tropical and Medicine Biology for financial and infrastructure support. MAS and AOH acknowledge the College of Science (COS) at the Rochester Institute of Technology (RIT) and The Gosnell School of Life Sciences (GSOLS) at RIT for ongoing support.

2. Young JM. Sinorhizobium versus Ensifer: may a taxonomy subcommittee of the ICSP contradict the Judicial Commission?. International Journal of Systematic and Evolutionary Microbiology. 2010;60:1711-3

12. Richter M, Rosselló-Móra R. Shifting the genomic gold standard for the prokaryotic species definition. Proceedings of the National Academy of Sciences of the United States of America. 2009;106:19126-31