Pseudomonas lini strain ZBG1 was isolated from the soil of vineyard in Zellenberg, France and the draft genome was reported in this study. Bioinformatics analyses of the genome revealed presence of genes encoding tartaric and malic acid utilization as well as copper resistance that correspond to the adaptation this strain in vineyard soil environment.

The first type strain of Pseudomonas lini which is CFBP 5737T, was isolated from Linum usitatissinum (flax) rhizosphere soil in 1993 at Dijon, France, attributing the name lini to this genus (1). In our study, P. lini strain ZBG1 was isolated from a vineyard soil in Zellenberg, France. In the databases, only one available genome sequence has been described for this species. Hence, acquiring the genome sequence of strain ZBG1 would be crucial to further comprehend the genomic information on this rarely reported bacterium as well as to elucidate the features of the strain for its adaptability in vineyard soil environments.

By comparison with the genome of P. lini strain DSM 16768, both genomes were differed by 49,576 bp, in which the genome size of strain ZBG1 is slightly bigger. The total annotated amino acid sequences were also compared using OrthoVenn (18). Despite sharing a total of 5,221 ortholog clusters, 13 unique ortholog clusters were identified within both genomes of P. lini strain ZBG1 and strain DSM 16768, respectively (Figure 1). 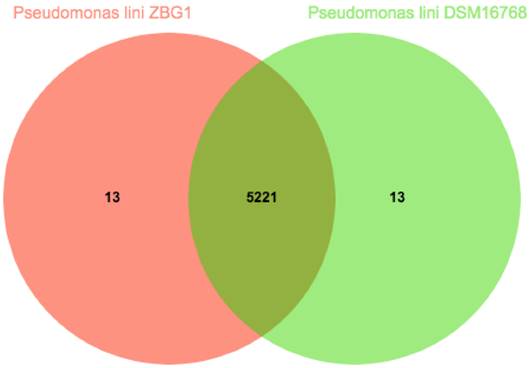 This draft-genome shotgun project has been deposited at DDBJ/EMBL/GenBank under the accession number LFQO00000000. The version described in this paper is the first version, LFQO00000000.

9. Iland P, Coombe B. Malate, tartrate, potassium, and sodium in flesh and skin of Shiraz grapes during ripening: concentration and compartmentation. American Journal of Enology and Viticulture. 1988;39(1):71-76

11. Lonvaud-Funel A, De Saad AS. Purification and properties of a malolactic enzyme from a strain of Leuconostoc mesenteroides isolated from grapes. Applied and Environmental Microbiology. 1982;43(2):357-361

13. Surico G, Bandinelli R, Braccini P. et al. On the Factors that May Have Influenced the Esca Epidemic in the Eighties in Tuscany. Phytopathologia Mediterranea. 2004;43(1):136-143