Chronic obstructive pulmonary disease (COPD), a chronic obstruction of lung airflow, is commonly associated with episodes of acute deterioration termed as "exacerbation" (1). Nearly 50% of COPD are due to viral infections, while the remaining are associated with bacterial infections (2, 3). Antibiotics are commonly prescribed for COPD exacerbations (4). As such, the emergence of multidrug resistant bacteria is possible, particularly in patients with recurrent COPD exacerbations.

Phenotypic assessment of resistance against commonly used antibiotics is widely practiced. However, such assessment is incapable of detecting the in vivo potential of the bacteria to escape the effect of antibiotics (5, 6). Recent advancement in next generation sequencing technologies has deemed to be a convenient and cost effective approach to assess the genomic properties of organisms (7). Here, based on genomic data generated from whole genome sequencing (WGS), antimicrobial resistance profile of S. haemolyticus strain C10A, isolated from the sputum of a 40-year-old male COPD subject with 20 years of smoking history was investigated in silico. During recruitment, the ratio of forced expiratory volume to forced viral capacity (FEV1/FVC) was less than 70% and the spirometry indicated a less than 12% of improvement of FEV1 after the bronchodilator test.

With the spectra generated from mass spectrometry, the closest match of strain C10A was S. haemolyticus with the score value of 2.107 indicating secure genus and probable species identification. To gain further evidence of the bacterial identification, the closest neighbor displayed by RAST server (9) was S. haemolyticus JCSC1435, a multidrug resistant strain exhibiting high genomic plasticity mediated by numerous insertion sequences (10).

The draft genome of S. haemolyticus C10A was 2,430,312 bp in size, with an average G+C content of 32.6%. Sequence assembly produced a total of 87 contigs with average size of 27,632 bp and maximum contig size of 153,180 bp. The sequencing depth was at 74.1-fold. Results from PGAAP revealed a total of 2,387 coding sequences with 5 rRNAs and 57 tRNAs identified in the genome. The associated bioproject number for S. haemolyticus C10A genome is PRJNA246625.

In search of genes associated with resistance towards antimicrobial agents, the annotation revealed the presence of candidates against a wide spectrum of antibiotics including aminoglycosides, macrolides, quinolones, penicillins, tetracyclines and glycopeptides in the genome of S. haemolyticus strain C10A. Figure 1 demonstrated the clustering of these identified determinants together with a series of possible virulence factors including components of cvfC, heme oxygenases and peptidase U32, with other S. haemolyticus and Staphylococcus strains.

Genome sequencing and annotation of S. haemolyticus strain C10A in the present study has demonstrated the concise detection of multiple antibiotic resistance and virulence genes. Such observation has postulated the necessity to weigh the risk of antibiotic resistance, prior to its prescription for COPD patients.

Nucleotide sequence accession number: The genome sequence of S. haemolyticus C10A isolate has been deposited in GenBank under accession no. JPRW01000000. The version described in this paper is the first version. 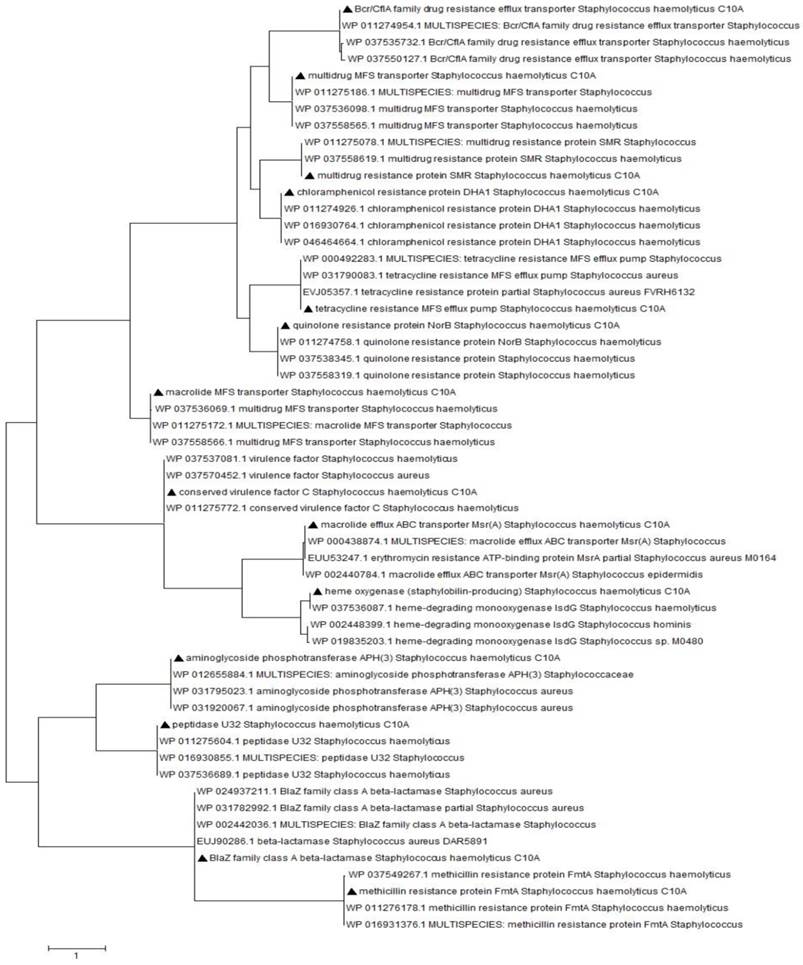