Diet, nutrition, and obesity are important topics of current research. While many insect genome and/or transcriptome models are based on dietary specialists, the lady beetle Coleomegilla maculata, a common New World species, is highly omnivorous. C. maculata feeds on plants, fungi, insects and other arthropods; its diet frequently includes conspecific cannibalism. This study reports and discusses the first nutritionally based C. maculata transcriptomes. These transcriptomes were prepared from highly inbred specimens provided limited diets, after adult eclosion, of either pollen only or eggs of a soft bodied hemipteran insect only. Selected sequences from the transcriptomes were compared to verify basic genetic similarity of the sampled individuals. Differentially expressed genes associated with these diets were identified to aid with studies of omnivore diet and nutrition. Selected transcriptome sequences described herein are filed with the National Center for Biotechnology Information (NCBI), GenBank Bioproject PRJNA236444.

North American agroecosystems are highly manipulated, particularly in the United States. Nonetheless, certain key insects persist within these ecosystem, acting as pests (consumers of or damaging to crops), as commensals, and as beneficials. One key beneficial insect found in many U. S. agroecosystems is the lady beetle Coleomegilla maculata (Coccinellidae: Coleoptera). C. maculata is a widely distributed [1] native North American species complex [2] and is generally accepted as an ecological indicator [3] and used in agricultural and ecological research as a representative non-target organism [4, 5]. Given its importance in agricultural ecology, the biology of C. maculata has been well studied. Studies of the diet of C. maculata have evaluated nutrition, focusing on pollen [6, 7], prey [8], and aiming at artificial diet development [9]. In the present work, gene expression in otherwise identical inbred specimens of this species of lady beetle are compared after restricted dietary intake, during the imaginal (adult) stage, of either pollen or insect eggs. The genetic resources described herein will facilitate further research on diet and digestive function in omnivorous organisms.

While C. maculata is accepted as an ecologically important lady beetle, it has not been widely utilized as a biological control agent. Some species of the family Coccinellidae are used as biological control in the US, such as Hippodamia convergens and Adalia bipunctata [10]. Harmonia axiridis, an introduced but invasive lady beetle in the US, has recently been modified to produce transgenic research organisms, and will be useful as a genetic model [11]. C. maculata has characters that make it a preferred model, including ease of maintenance [12] and visible phenotypic mutant strains ([13] and unpublished results). The genome size of C. maculata is relatively small, estimated at 0.19 pg [14]; based on standard conversion, assuming a diploid genome:

this is roughly equivalent to 186 Mbp [15] so sequencing the full genome of this insect should be achieveable. A reference transcriptome of C. maculata has been published to the internet (http://2ei.univ-perp.fr/?page_id=89, accessed 22 July 2014). The transcripts provided by the study described herein will facilitate further molecular genetic, biochemical, and physiological investigation. Because the insects used for this study were highly inbred and also siblings, the sequences represent a limited number of alleles, and do not represent the wider populations of the species in Mississippi or the broader environment. On the other hand, the sequences obtained may be used for a baseline to determine population genetics and identify variability in the species and between subspecies.

Diagram of comparison of total contiguous sequences generated from adult insect samples fed either a diet of only insect eggs (IE) or only pollen (P). 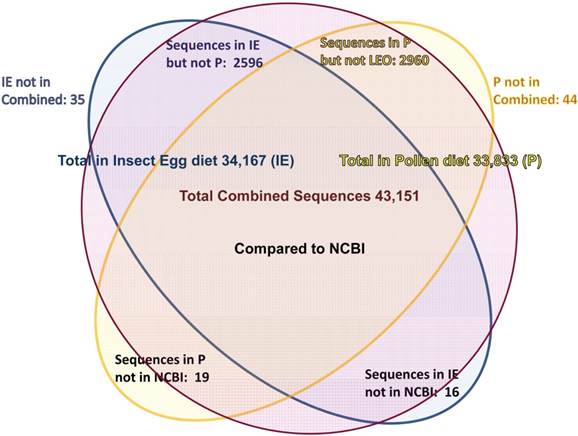 Assemblies of the total RNA yielded 33,833 assembled sequences from the pollen fed treatment and 34,167 assembled sequences from the insect egg fed treatment. The combined sequences assembled into 43,151 sequences. Average sequence lengths were 1403, 1300, and 1456 respectively. While many of the treatment group sequences were identical or nearly so, there were representatives of unique sequences as shown in Figure 1. Because the assemblies were de novo, many unique and unclassified sequences were expected. To gain an insight on the similarities between the assemblies, sequences were analyzed by NCBI BLAST® (US National Library of Medicine) [16] using the tBLASTx “search translated nucleotide database using a translated nucleotide query” (database accessed 22 May 2013). The resulting BLAST spreadsheets were sorted and the longer and more similar (to NCBI accessions) sequences were examined. Sequences shorter than 500 nt and with expect values >1e-10 were discarded. The remaining sequences amounted to around 10% of the total assembled sequences: 3,376 from the pollen fed treatment, and 3,358 from the insect egg fed treatment (Table 1A, Table 1B). The sequences from both treatments were primarily similar to other insect sequences (95%, +/- 0.5%), and to RNA sequences (not specifically analyzed). The largest portion of similarities by insect order was to Coleoptera, as expected (49%), as shown by two pie charts, one for each treatment, in Figure 2. The individual insects used for sequencing were inbred siblings, thus many identical sequences from the two samples were expected. The greatest number of similar sequences in GenBank came from the two beetle species Tribolium castaneum and Dendroctonus ponderosae. To validate the baseline similarity of our sequence sets, sixteen sequences that were most closely related to the same GenBank sequence, and at similar expect values and similar lengths, were chosen from each treatment and compared pairwise in BLAST (BLAST two sequences option). Results are shown in Table 2; all comparisons were at least 99% identical at the nucleotide level. These results support the assumption that the two sets of sequences represent nearly identical specimens, differing primarily in those transcripts of genes responding to diet provided to the adult insects. Also as expected, some sequences that were unique to the treatments were associated with the diet [17]. Among the pollen fed sequences were hits similar to plant sequences, and among the egg fed sequences were hits similar to the genus of the insect eggs, Lygus spp. Interestingly, some of the egg diet sequences were nearly identical (e-value 0) to a virus recently described from Lygus lineolaris [18]. It appears that the viable Lygus spp. eggs used as diet were carrying the virus, indicating that the virus was present in the laboratory colony and was able to resist degradation by the digestive system of C. maculata. The implications of this finding may be important for future pest control strategies aimed to utilize genetically modified or pathogenic viruses.

Individual transcriptomes of samples are very similar in overall characteristics, as expected for inbred sibling samples. Pie chart comparison of most similar (expect <e-10) and longest (>500 nt) contiguous sequences generated from adult insect samples fed either a diet of only insect eggs (IE) or only pollen (P). Roughly 10% of the total sequences are represented. 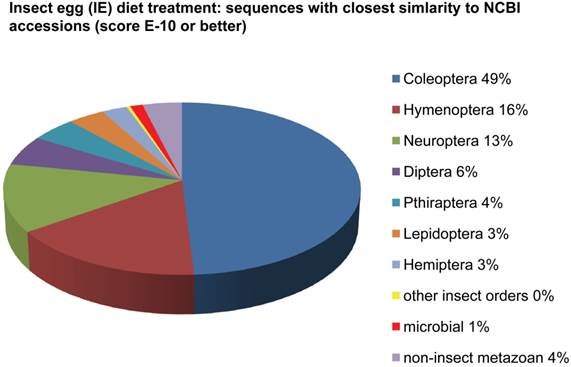 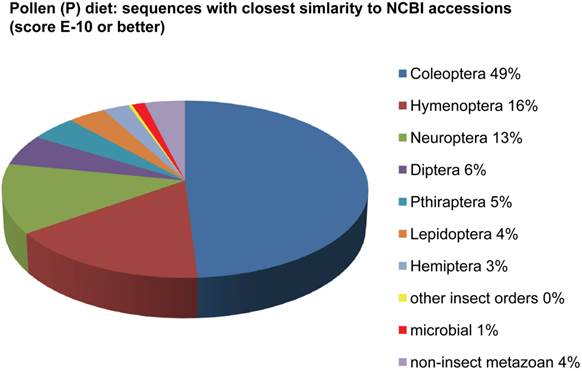 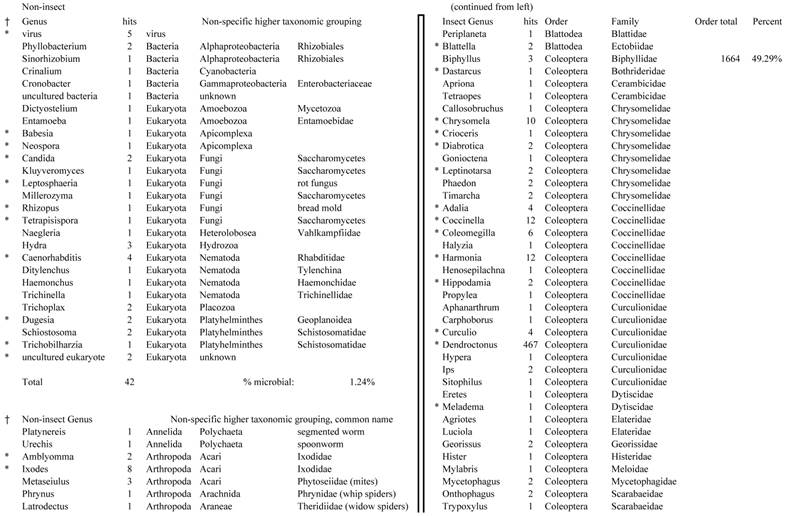 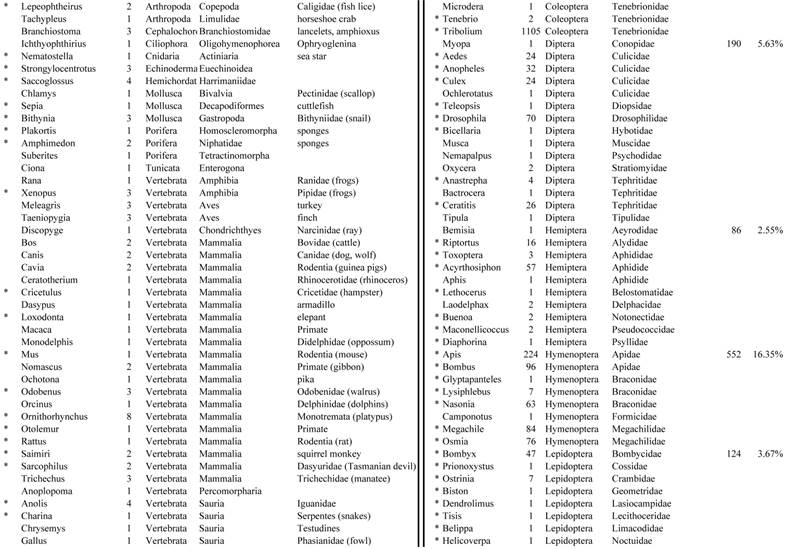 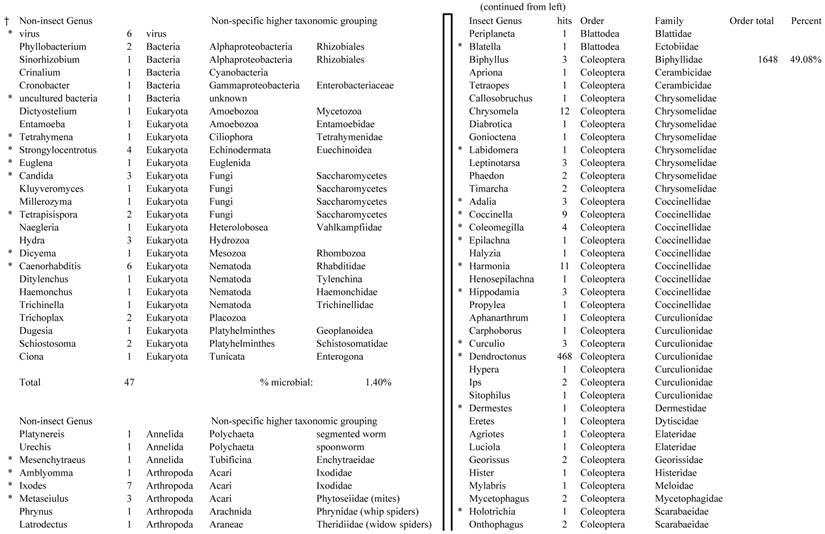 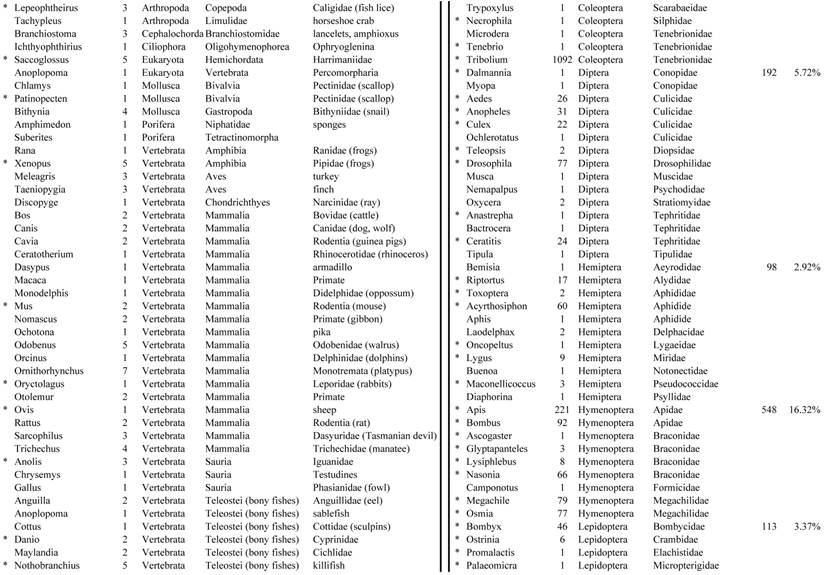 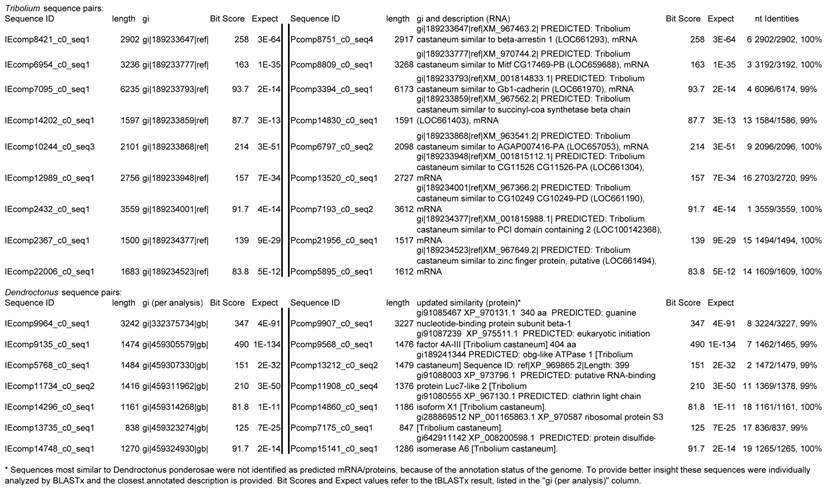 Further analyses of the transcripts reported here will provide insight on genes that are linked to differential metabolism of plant and animal based diets. The sequences identified here, after validation among further representatives of this species, will be used to measure quantitative changes in gene expression between insects utilizing multiple sources of foods, and those that are deprived of specific dietary components. Potential projects include varying diet at different stages of insect development; this species is known to utilize different diet components at different stages of development [19-21]. Another possibility is to evaluate genetic responses to specific prey, as C. maculata has been shown to utilize prey of specific sizes and species [22]. This will help us understand how to produce high quality generalist predator biological control agents, and assure conservation of beneficial insects in our constantly changing world environment. The details of the genes expressed by this omnivorous insect, and their correlation with diet and nutrition, will provide insights into nutritional health of other omnivores including humans.

Lady beetles used to establish laboratory colonies were collected from fields surrounding the USDA-ARS and Mississippi State University Delta Research and Extension Center in Stoneville, MS, 38776. Insect cultures were maintained in the National Biological Control Laboratory at Stoneville, MS without wild specimen introgression from August 2010 through the time of RNA sample collection in March 2013. Insects were reared as larvae in Petri dishes of sizes ranging from 35 to 250mm with mesh glued into one side of the dish for ventilation, and as adults in 5.25 x 5.25 inch cages [12]. Temperature was generally maintained at 24o C for 16 lighted hours and 19o C for 8 dark hours in Percival (Perry, IA) E30B growth chambers. Larvae and adults were fed ad libitum a combination of pollen, Daphnia, Brewer's yeast, honey, and eggs of laboratory cultures of Lygus spp. [12]. Water was provided in 1.5 ml microcentrifuge tubes with caps removed and plugged with cotton.

Inbreeding of beetle stock was performed by isolating individual gravid females from the primary wild type colony, collecting and rearing all eggs from individual females, and continuing culture using only offspring of the most fertile and fecund female. From the resulting culture the inbreeding step (female selection) was repeated for a total of six isofemale (I6) selection steps.

Assembled sequences were analyzed by NCBI BLAST® (US National Library of Medicine) [16] using the tBLASTx “search translated nucleotide database using a translated nucleotide query” (database accessed 22 May 2013). BLAST results were analyzed by diet treatment (eggs only or pollen only) and as a combined group. Spreadsheet results were sorted by Hit Score and only those sequences in the two treatment groups meeting the combined criteria of >500 nucleotide (nt) and E (expect) score <E-10 were used for further analysis.

Because the sequenced samples were derived from two individual insects that differed only in their adult diet, the transcriptomes were expected to be nearly identical for those sequences representing genes that were not associated with diet. To verify that assemblies represented genetically similar individuals as expected, sixteen sequences were chosen based on apparent identity by length of assembled sequence and closest tBLASTx hit. Sequences were chosen from the group most similar to Tribolium castaneum sequences and from the group most similar to Dendroctonus ponderosae sequences, with the assumption that sequences from other beetles would represent conserved transcripts. Sequences from pollen-fed (P) and insect egg-fed (IE) were compared at the nucleotide level using BLAST.

I acknowledge the many Biological Science Technicians who supported this work: Catherine Louise Smith, Fannie Mae Byrd, Ebony Williams, Mary Elizabeth Huddleston, and Joseph Grey Ballenger. Many thanks go to Dr. Jeffrey Gore of Mississippi State University for collecting and donating live lady beetle specimens, and to Drs. Don Weber and Jonathan Lundgren of USDA ARS for helpful advice on raising beetles in the laboratory. Insect eggs (Lygus spp.) were kindly provided by the NBCL Insect Production team, Dr. M. Guadalupe Rojas, Orswald (Archie) Clark, Derrick T. Jones, Matthew D. McDaniel, and Terry E. Johnson. Assistance in ordering sequencing from University of Washington High-Throughput Genomics Center was provided by Dr. Peter Sabo and other helpful support staff. Batch BLAST analyses were performed by Linda Ballard, Bioinformaticist of the ARS Genomics and Bioinformatics Research Unit led by Dr. Brian Scheffler. Mention of trade names or commercial products in this article is solely for the purpose of providing specific information and does not imply recommendation or endorsement by the US Department of Agriculture (USDA). USDA Agricultural Research Service is an equal opportunity employer. I thank Mark Weaver and Jeremy Marshall for reviewing an earlier version the manuscript prior to submission.

The author has declared that no competing interest exists.