No Variation at 29 Microsatellites in the Genome of Jatropha curcas

Genetic variation in the genome of a given species is the basis for natural selection and genetic improvement through selective breeding. We applied 29 microsatellites located on 11 linkage groups to study genetic variation in 276 accessions of J. curcas collected from nine locations in five countries in South America, Asia and Africa to initiate a breeding program. To our surprise, we did not detect any genetic diversity at all 29 microsatellites loci. All the 276 accessions were homozygous at all loci and shared the same genotype at each locus, suggesting no microsatellite variation in the genome of Jatropha curcas. This result is quite unusual, and may have a profound influence on the breeding strategies and genome study of this species.

Jatropha curcas (Euphorbiaceae) is oil-bearing tree species tree and grows naturally in countries of the equatorial Americas [1]. It has been introduced to other tropical countries in Africa and Southeast Asia (Indian, Indonesia, Malaysia and China) by Portuguese sailors 400 years ago [1]. J. curcas is considered a potential bioenergy tree. It does not compete with food crops for fertile land resources [2]. Therefore, it was introduced rapidly in various rural programmes with the expectation of producing biodiesel sustainably and profitably [3,4]. Genetic variation is the basis for natural selection and genetic improvement through selective breeding. Genetic variation can be measured at DNA level [5]. Microsatellites are one of the most preferred co-dominant DNA markers for studying genetic diversity [6] because of their abundance in a given genome, high polymorphism and the ease of genotyping with automatic DNA sequencers. In J. curcas, microsatellites have been recently developed [7,8] and used in constructing a linkage map [8], and studying genetic diversity within and among populations [7,9,10]. Results of studies on genetic diversity of J. curcas are controversial [11]. Some reported no genetic variation at microsatellite loci [8,10,12], while some reported limited variation [13,14].

To initiate a breeding program for genetic improvement of J. curcas, we collected seeds from nine locations in five countries in South America, Asia and Africa since 2006 and 2007 (Table 1). The collected seeds were germinated in Singapore, and 276 trees were planted and managed under the same condition in our experimental farm in 2007. We observed substantial variations of phenotypic traits, such branch number, tree height and seed yield [10]. We isolated DNA from fresh leaves of each tree using a plant DNA isolation kit (Qiagen, Hilden, Germany). DNA was examined in 1% agarose gels to ensure sufficient quality and quantity for PCR. We selected 29 microsatellites from over 1000 markers developed in our lab [8] because they were able to amplify DNA from J. curcas and the related species J. integerrima. Among the 29 microsatellites, 21 named with Jatr- were developed from a J. curcas individual, while the remaining 8 named with Jcuint- were cloned from a hybrid (J. curcas X J. integerrima) individual. Sixteen markers were already mapped onto 11 linkage groups of jatropha [8], and the remaining 13 had not been mapped yet (Table 2). We applied the reference families, which were used to construct the first generation linkage map of jatropha [8], to examine the inheritance patterns of alleles at the 29 loci. All microsatellites were genotyped using the DNA sequencer ABI3730xl (Applied Biosystems, CA, USA) as described previously [8].

*: All the 276 J. curcas trees showed the same genotypes at each of the 29 microsatellite loci. LG: Linkage group where the markers were mapped. UN: Unmapped. Primer sequences of mapped microsatellites can be found in the paper of Wang et al (2011) [8], while the primer sequences of unmapped markers were submitted to GenBank. The numbers (e.g. 215/215) under each species are the sizes of alleles in base pairs (bp) at each locus. 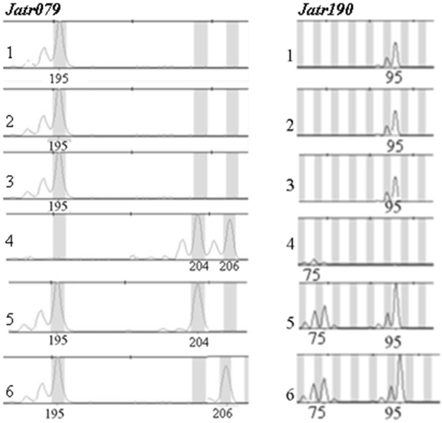 All the 29 microsatellites amplified specific PCR products in J. curcas and J. integerrima (Table 2). Surprisingly, all the 276 J. curcas individuals were identical and homozygous in all 29 loci, whereas in the individuals from the species J. integerrima and the hybrid, most microsatellites were heterozygous and polymorphic (Table 2 and Figure 1). These results suggest that (A) there is no genetic variation in the 29 microsatellite loci in J. curcas, (B) technical limitations prevent detection of genetic variation; or (C) the J. curcas accessions are cloned from a single tree recently, or (D) J. curcas is haploid or double haploid or (E) J. curcas is capable of apomixes. However, we can rule out the possibilities B-E. As mentioned above, we used one (i.e. ABI3730xl sequencer) of the most advanced genotyping platforms for genotyping microsatellites. The markers showed Mendelian inheritance in the two reference families used for constructing the linkage map of jatropha [8], thus excluding the possibility of errors in genotyping. The 276 trees used in this study were collected from five countries on three continents, and some seeds were directly collected from the wild. Therefore, it is impossible that they were cloned from single individuals recently. Even if all individuals evolved from a single ancestor, after the first introduction 400 years ago (ca. 400 generations), microsatellites should have shown some degree of variation. This is because microsatellites usually show a higher degree of mutation (10-4/generation) than other regions (10-7/generation) of the genome [6]. Karyotype analysis showed that J. curcas was diploid, containing 11 chromosome pairs [16], thus excluding the possibility of it being haploid. When the female flowers were covered with paper bags to prevent pollination, the female flowers aborted, whereas using artificial pollination, the female flowers developed into fruits. Microsatellite genotyping showed that the offspring inherited an allele at each locus from the father side (Table 2 and Figure 1). These data indicate that J curcas can reproduce sexually. Thus, our results suggest that there is no microsatellite variation among the 276 individuals.

Alignment of DNA sequences of two microsatellite markers (Jatr161 and Jcuint221) against the genome sequence of a J. curcas individual from Japan. At the locus Jatr161 isolated from J. curcas, there is not repeat and sequence variance, whereas at the locus Jcuint221 isolated from the hybrid (J. curcas x J. integerrima), both DNA sequences and the number of repeats are different. 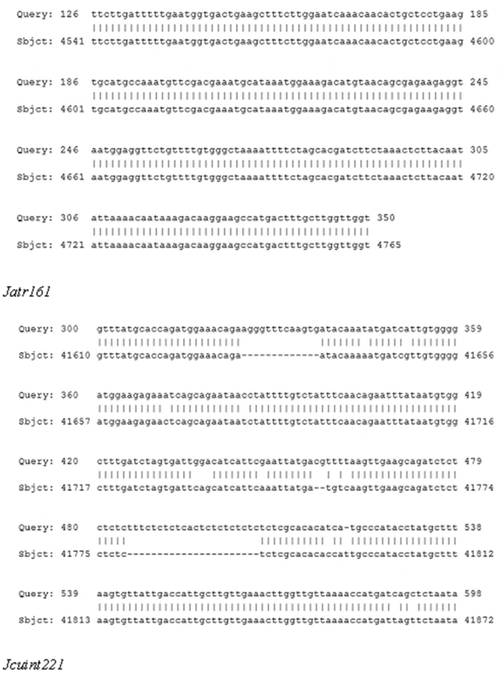