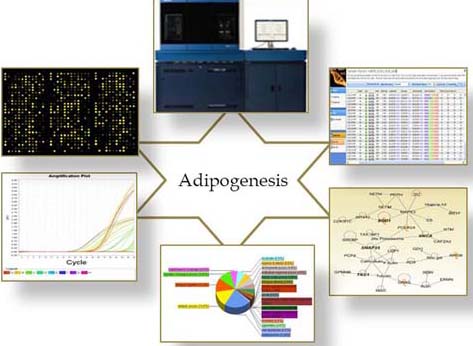 The recent technological innovations in the area of functional genomics, gene expression/transcriptomic profiling can provide new insights to understand the molecular basis of adipogenesis. The focus of this review is to highlight the recent advances in our understanding of the complex interplay of gene expression events and the regulatory mechanisms of adipogenesis in mouse cell lines, humans and farm animals. All these studies have employed the availability of constantly evolving high throughput 'omics' technologies including microarrays, RNA-Seq, chromatin immunoprecipitation, next generation sequencing, RNAi, miRNA profiling and quantitative PCR arrays.

Adipogenesis is the process by which immature adipose cells differentiate into specialized mature cells, such as adipocytes, being able to synthesize and store fatty acids in the form of triglycerides as well as to release free fatty acids, playing an important role in the energy regulation [1]. Not only the adipose cells store and release fatty acids, but they also release a series of adipokines that have various regulatory functions on energy metabolism, such as leptin, that inhibits the food intake and stimulate energy expenditure [2]. Another aspect that has gathered the attention of researchers to adipose tissue is the significant increase of obesity in humans which is a critical risk for human health, especially in developed countries [2]. Obesity is now a major concern for not only humans but also for companion animals' health, such as dogs and cats which are more and more affected by this condition [3]. Besides health aspects, the adipose tissue has also been studied in the farm animals, especially those specialized in meat production such as: beef cattle, pigs and broilers. The reason is that adipose tissue is an important characteristic related to meat quality and nutritional value of the meat and can also impact animal productivity [4, 5]. However, our understanding of the regulatory mechanisms on adipogenesis in mammalian species is currently very limited.

Studies in the past decades on the molecular mechanism of adipogenesis have revealed the important role that this tissue plays in the regulation of fat and energy metabolism [6]. Recent studies have also indicated the importance of adipogenic transcription factors such as Peroxisome Proliferator Activated Receptor γ (PPARγ), CCAAT-Enhancer Binding Proteins (C/EBPs), Kruppel Like Factors (KLFs) and Sterol Regulatory Element Binding Protein (SREBP), in regulating the expression of many adipogenic genes leading to the differentiation of adipocytes [7, 8]. Besides the transcriptional factor regulated mechanisms, many other genes have been also reported to be differentially expressed during adipogenesis, suggesting that the adipogenesis is a complex process associated with many regulatory mechanisms. In this paper, we have focused on elucidation of molecular mechanisms of adipogenesis by studying the transcriptome (mRNAs and miRNAs) using advanced high throughput technologies. Recently, high-throughput technologies have become essential tools for large scale studies for identification of the molecular networks associated with adipogenesis. These include microarrays or RNA-Seq for gene expression profiling, chromatin immunoprecipitation followed by microarray analysis (ChIP-chip), or next generation sequencing (ChIP-Seq) for comprehensive analysis of target genes of transcription factors, RNAi screening in conjunction with microarray, DNase I hypersensitivity analysis, and adipogenesis quantitative PCR array [9-11].

DNA microarrays comprising hundreds or thousands of DNA fragments arrayed on small glass slides which can be used to probe the entire transcriptome to give an overall picture of gene expression behavior [12]. Quantitative real-time PCR (qRT-PCR) combines the amplification of a DNA sequence with the detection of the amplified products during each reaction cycle and is a commonly used validation tool for confirming gene expression results obtained from microarray analysis [13]. Microarray technology has been used in several gene expression profiling studies (see Table 1 for some examples) in cell culture models from mouse pre-adipocyte cell line 3T3-L1 [14-18], human mesenchymal stem cells or subcutaneous abdominal fat sample [19-23], bovine [24-27], pig [28-30] as well as other organisms [31] to monitor transcriptional changes associated with adipogenesis. Different array technologies including commercially available Genome Arrays (Affymetrix), custom spotted oligonucleotide or cDNA arrays [10] have been employed in conjunction with qRT-PCR for most of these studies to identify molecular changes at different stages of adipogenesis in response to different treatments for differentiation [10, 17, 32, 33].

A large number of genes identified by these microarray studies, using different cell models or organisms, are found to be associated with adipocyte differentiation which is driven by a network of transcriptional regulators [10, 34]. Some of these examples include members of Kruppel-like factor (Klf4) family, Klf6 and Klf5, which are required for adipogenesis by transactivating PPARγ [35]; and zinc finger containing transcription factor Egr2 (Krox2), which stimulates adipogenesis through activating C/EBP-β by binding to its promoter [36]. Besides these, genes encoding a number of enzymes including xanthine dehydrogenase (Xdh, XOR), stearoyl-CoA desaturase (Scd1), adipose triglyceride lipase Pnpla2 (ATGL) have also been identified through these microarray studies [34]. Genome wide microarray analysis in Hanwoo (Korean cattle) identified a disintegrin and metalloproteinase with thrombospondin motifs 4 as one of the key genes controlling the relationship between marbling fat deposition and connective tissue degradation [27].

Several transcription factors and motifs with no previous link to adipocyte biology were identified using genome-wide analysis of gene expression during adipogenesis of mouse embryonic stem cells. This study utilized Mouse Genome array (Affymetrix), qRT-PCR and in silico prediction analysis of transcription factor binding sites with comprehensive bioinformatics analysis [37]. Puri et al. [38] identified the role of Receptor interacting protein 140 and Mitogen-activated protein kinase as powerful regulators of adipogenesis by performing Mouse Genome array (Affymetrix) comparative gene expression profiling of siRNA knock out cultured 3T3-L1 adipocytes cells vs. control. However, inconsistencies have been observed in some of these microarray studies due to the usage of different platforms and protocols, probe sequences or their annotations. Recently available, “Adipogenesis Pathways™ Focused Human Genome Microarrays” (ArrayIt Corporation) which contain long-mer capture agents for 89 genes involved in the human adipogenesis pathway, would provide a solution to overcome these inconsistencies in the human adipogenesis studies. Furthermore, the mouse adipogenesis RT Profiler PCR array (QIAGEN) can also be utilized to analyze the gene expression of a focused panel of 84 key genes involved in adipogenesis, with real time PCR sensitivity and the multi-gene profiling capability of a microarray.

Chromatin immunopreciptation (ChIP) is widely used for identifying and characterizing elements like histones, transcriptional factors, in protein-DNA interactions involved in the gene regulation or chromatin organization [46]. ChIP-chip (chromatin immunoprecipitation-on-chip) involves incubation of the genomic DNA in the presence of proteins, shearing of DNA into small pieces followed by the immunoprecipitation of DNA-bound proteins with an antibody. Subsequently, DNA is purified, labeled and hybridized to microarray which allows identification of significantly enriched sequences bound by the proteins of interest [47]. Most of the changes occurring during adipogenesis are thought to be controlled or mediated by particular transcription factors and ChIP-chip is able to produce comprehensive genome-wide location information for specific transcription factors. Several target genes of PPARγ were identified using integrated analyses of ChIP-chip, expression microarray and computational motif search [9]. Other studies have characterized PPARγ and C/EBPα-binding sites in mature 3T3-L1 adipocytes using ChIP-chip [48]. Although microarray platforms provide a method for 'global' ChIP analysis, a novel approach combining Chip assay with next generation parallel sequencing (ChIP-Seq) has allowed researchers to study genome-wide protein DNA interactions in an unbiased manner [47, 49]. These genome-wide studies employing ChIP-Seq have improved our understanding of the transcriptional networks controlling adipogenesis at different stages of differentiation [50-52].

Further studies have also identified the molecular signatures of PPARγ binding using ChIP-Seq [53-56]. Transcription factor 7-like 1 (TCF7L1) was found to repress a large number of cytostructural genes before adipocyte gene induction using ChIP-Seq [57]. The first genome-wide profile of H3K56 (lysine 56 of histone H3) acetylation, and binding location analysis of E2F4, C/EBPα and HSF-1 binding in human adipocytes derived from mesenchymal stem cells found that almost half of the genome shows signs of H3K56 acetylation. This acetylation is associated with transcription factors and proteins in the adipokine signaling, and will serve as an important resource to further understanding of adipocyte transcriptional regulation and epigenetic modifications [58].

Recent studies used DNase I Hypersensitive (DHS) site analysis in combination with deep sequencing, to detect dynamic changes of the chromatin landscape during adipocyte differentiation, coinciding with cooperative binding of multiple transcription factors to transcription factor hotspots [59, 60]. In DHS site analysis, nuclear or whole-cell extracts containing proteins of interest are allowed to bind to DNA segments followed by the treatment of the resulting complexes with DNase I. Deep sequencing of the DNA released from DHS sites helps in the identification of regulatory elements for a given locus and to characterize chromatin structures [61]. The time-resolved expression profiling of all nuclear receptor superfamily members, using the chromatin-region specific primers by qRT-PCR of ChIP templates revealed that glucocorticoid receptor and its ligand cortisol as central regulatory factors controlling early regulatory events in human adipogenesis [62]. The combination of ChIP for enrichment of both coding and unexplored regulatory regions of transcriptional factors, coupled to the targeted re-sequencing or transcriptome analysis using RNA-Seq on next generation sequencing platforms, will provide further insights into the genomic architecture of its regulatory regions and the associated changes in transcriptomes. RNAseq will further prove to be effective in identifying transcriptomes under multiple conditions of adipogenesis and their response to various environmental factors.

MicroRNAs are non-coding small RNAs with approximately 22 nucleotides that participate in several biological processes, such as development, cell differentiation, apoptosis, metabolism and pathogenesis through the gene expression regulation mainly by mRNA translation repression [63-65]. Several microRNAs are reported to play a role in the physiology and pathology of adipose tissue of mammals [66, 67]. Therefore, there is a great interest to characterize the microRNA expression profile in fat tissues of humans as well as farm animals in order to understand how microRNAs participate in the regulation of adipose tissue development. Recent studies reported the miRNA profiles in adipose tissue of meat farm animal, such as beef cattle [68, 69] and pigs [70]. Adipose tissue (subcutaneous fat) from beef cattle showed different profiles of miRNAs according to the location in the fat depot, with 80, 66 and 63 miRNAs detected respectively in abdominal subcutaneous, back subcutaneous and rump subcutaneous tissues by qRT-PCR [68]. Besides not only depot location, but also the fat traits of the animals (high backfat thickness vs. low backfat thickness) impacts miRNA profiles found by qRT-PCR analysis. A total of 42 miRNAs were differentially expressed between these groups, being miR-378 the most differentially expressed. Li et al. [71] profiled swine adipose tissue (backfat) using a Solexa deep sequencing approach which allowed the identification of the sequence and relative expression of 227 miRNAs. Their results also showed that the abundant miRNAs belonged mainly to 32 miRNA gene families, which included miR-143, miR-103, let-7, and miR-148. Comparing the conserved miRNAs between the profiles of 7day old and 240 day old pigs, the authors found a total of 93 miRNAs up-regulated and 33 down-regulated in adult animals, indicating the impact of animal development in miRNA profiles of adipose tissue. Deep sequencing analysis also provided a global view of the complexity of the miRNA transcriptome and in total 164 potential novel tissue-specific miRNAs were detected [44].

Understanding the molecular basis of adipogenesis and fat cell development is essential to identify new biomarkers. Adipogenesis is a complex process that appears to be regulated in a coordinated manner by genes, proteins, microRNAs expression to modulate fat formation in mammalian species. Integrated analysis of transcriptome, proteome, microRNAome and genome wide association studies are necessary to achieve the comprehensive view of the regulatory mechanisms on adipogenesis. Furthermore, detailed information on epigenetic regulation will be extremely beneficial to complement these studies to improve our understanding of the complexities of adipogenesis.

The authors have declared that no conflict of interest exists.